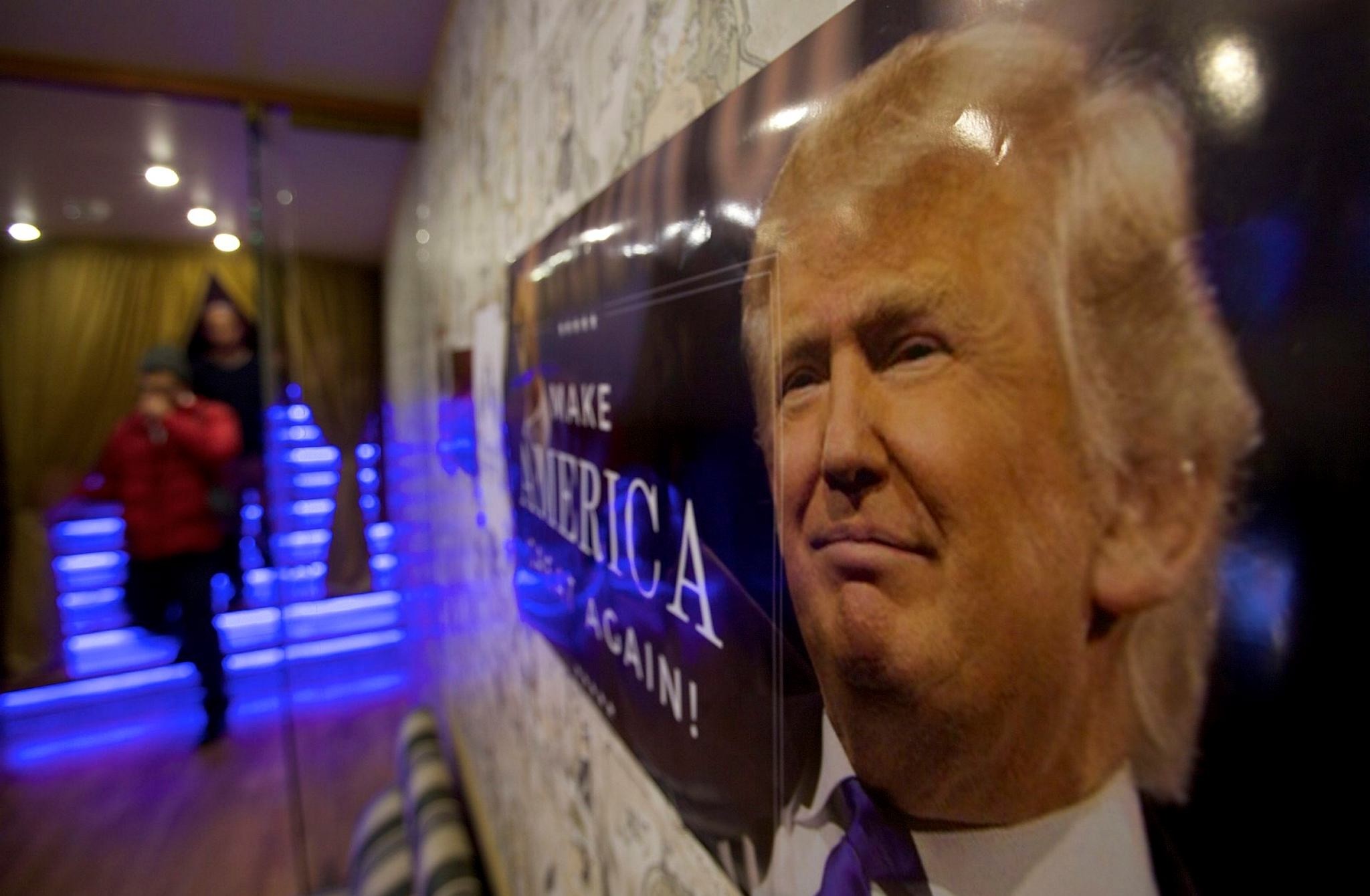 Twenty-four hours before Donald Trump was to be sworn in as president of the United States, several dozen people packed a Moscow nightclub to get a head start on celebrating.

The small jazz club located a stone's throw from the Stalin-era tower housing Russia's foreign ministry might have been early, but it isn't the only place in the capital that Ronald Reagan associated with an "evil empire" to be toasting Trump.

Across from the U.S. embassy compound in central Moscow, the Russian Army store put up a poster with the incoming president's picture to advertise inauguration day discounts of 10 percent for embassy employees and American citizens.

"Russians celebrate a lot. We celebrate Russian holidays, foreign holidays. I welcome it because it's not a secret that Russians were glad that Trump won," Arbat 13 club owner Igor Khaletsky said when asked why Russians would want to party in honor of a U.S. president.

Months before the November election, Russian lawmakers openly rooted for Trump. Kremlin officials also made remarks which clearly indicated Moscow preferred to see the wealthy businessman in the White House rather than former Secretary of State Hillary Clinton.

President Vladimir Putin took a parting shot at the Obama administration this week, accusing it of trying to undermine Trump's legitimacy with fake allegations and "binding the president-elect hand and foot to prevent him from fulfilling his election promises."

Both Putin and other top Russian officials have dismissed an unsubstantiated dossier outlining unverified claims that Trump engaged in sexual activities with prostitutes at a Moscow hotel, calling it a "rude provocation."

The inauguration party on Thursday at the underground jazz club just off Moscow's main tourist drag attracted a curious crowd: Canadian tourists, an American personal trainer, Russian friends of the night's performers, and the owner of a provincial restaurant called Trump.

"I thought this was like a comedy event, more of a spoof of the fact," said Joe MacInnes, a Canadian who came with two friends and was slightly bewildered. "Are they making fun of the fact that the world thinks that Russia is supporting Trump?"

The guests were entertained by obscure Russian jazz acts, stand-up comedians, a Russian band called The Trump Band, and a teenager who grew up in the United States and sang a karaoke version of "Strangers In the Night."

The Trump Band plays every weekend at a steakhouse in Tula, a city 170 kilometers (106 miles) south of Moscow near the birthplace of novelist Leo Tolstoy.

Owner Natalya Palladicheva, who opened the restaurant two years ago, named it Trump after the English word that means a high-ranking hand of cards. She didn't like the sound of the Russian equivalent.

Burdened with the association, Palladicheva after the November election introduced a "Donald Trump menu," which features an 18-centimeter (7-inch) -high hamburger.

"It's a joke of course," Palladicheva explained while attending the pre-inauguration party at the jazz club. "We all want relations between Russia and American to improve, particularly for Russia."

At the table across from her, two middle-aged men, dressed in black and wearing cargo pants, were eating burgers with Bologna sausage. One of them, a personal trainer from California, called it a Trump burger.

"There's nothing to be afraid of" in Russia, said Jim Barcena, who has been coming to Russia to train professional boxers since 2009. "It's the governments that pit us against each other. The positive thing is, apparently Putin and Trump have a nice relationship. I hope it's for real."

Trump's open admiration of Putin has created expectations of improved relations between Washington and Moscow. Trump has not yet articulated a clear policy on Russia, and some of his Cabinet nominees have voiced decidedly hawkish stances.

In turn, Putin has expressed hope that "common sense will prevail" and Russia and the United States will be able to normalize relations once Trump takes office Friday.

The Thursday night event at Arbat 13 club was the first of at least two private parties scheduled in Moscow to celebrate Trump's passage from president-elect to commander in chief.

Willi Tokarev, 82, a singer who emigrated to the U.S. in the mid-1970s and soon became a music legend, topped the entertainment bill with his song "Trumplissimo America!"

"Trump, Trump - symbol of America. Trump, Trump, he's really president," the mustachioed Tokarev sang on a tiny stage with the Russian and American flags hanging behind him.

Tokarev, whose real first name — Vilen — is a portmanteau word for Vladimir Lenin, told The Associated Press he wrote the song after friends who also know Trump asked him to compose something. He was glad to help.

"I saw that this person is able to make the country the way he wants it to be because he does not need anything for himself. He's got everything," Tokare said. "If these two leaders... can find common language, they can bring order to the world."