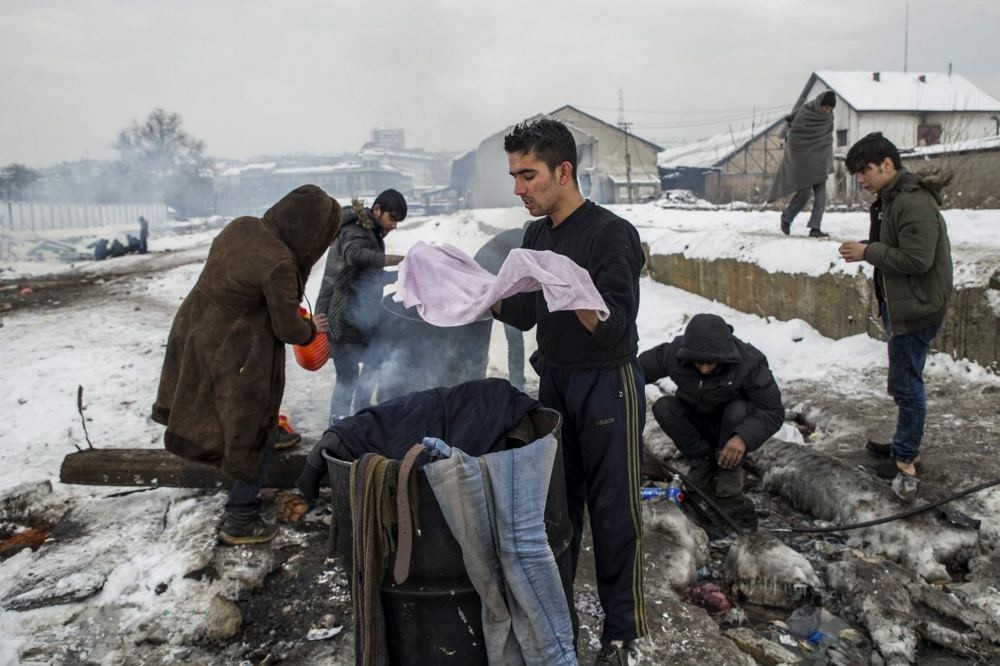 Refugees wash their clothes as they take a shower outside a derelict warehouse where they have taken shelter in Belgrade, Serbia on Jan. 12.
by Daily Sabah with Wires Jan 21, 2017 12:00 am

While nearly a thousand migrants struggle outdoors in the bitterly cold winter conditions, they also face illegal deportations from Serbia as their humanitarian situation worsens

After the closure of the so-called Balkan route to European Union member states, hundreds of migrants, mostly young men from Afghanistan and Pakistan became trapped in Serbia. As they wait for the border to reopen, they are subjected to ill-treatment from Serbian officials, humanitarian organizations claimed.

According to the Belgrade Centre for Human Rights, there are a total of 1,000 refugees who were illegally deported to Macedonia or Bulgaria from Serbia since September 2016, as reported by Middle East Eye.

"Our colleagues on the field received about 20 complaints from refugees about illegal mass deportations. The assessment is that a total of 700-1,000 refugees were illegally deported to Macedonia and Bulgaria since September," said Nikola Kovacevic.

"Colleagues from the Macedonian Young Lawyers Association separately reported that somewhere between 400 and 600 people were deported there," he added.

"It is particularly concerning that in November, buses with asylum seekers and migrants from Subotica being taken to Presevo camp were redirected and 40 people were dumped across the border into Macedonia," said HRW researcher Lydia Gall. "These deportations are illegal and contrary to Serbia's obligations under international law. Any deportations should be preceded by a legal process."

"The Serbian government should investigate and ensure asylum seekers and migrants are provided a fair procedure, including access to the asylum procedure," she said.

Migrants in Belgrade staying in abandoned buildings near the city's railway station are struggling to survive by lighting campfires in areas surrounded by boxes covered with cardboard to protect them from the cold.

The makeshift shelters see people sitting, laying and sleeping on a muddy floor, covered in a blanket. The shelter is full of dark smoke from the people's campfires. Some seem utterly shaken by the freezing cold of a Serbian winter.

According to Frontex data, over 740,000 illegal border crossings took place on the Western Balkans route in 2015 alone.

During this period many migrants tried various ways to cross both the Croatian and Hungarian borders - thereby entering the EU and gaining asylum - but many have failed, finding themselves stuck in non-EU Serbia, a small country of just over 7 million people.

There are currently around 5,600 migrants in special centers across the country, according to Serbia's Commissariat for Refugees and Migration.

However, there are estimated to be still over a thousand migrants on the streets of Belgrade, refusing to seek asylum in Serbia - something which would end their dream of entering the EU.
RELATED TOPICS