Europe's far-right leaders gather in Germany, say 2017 will be their year 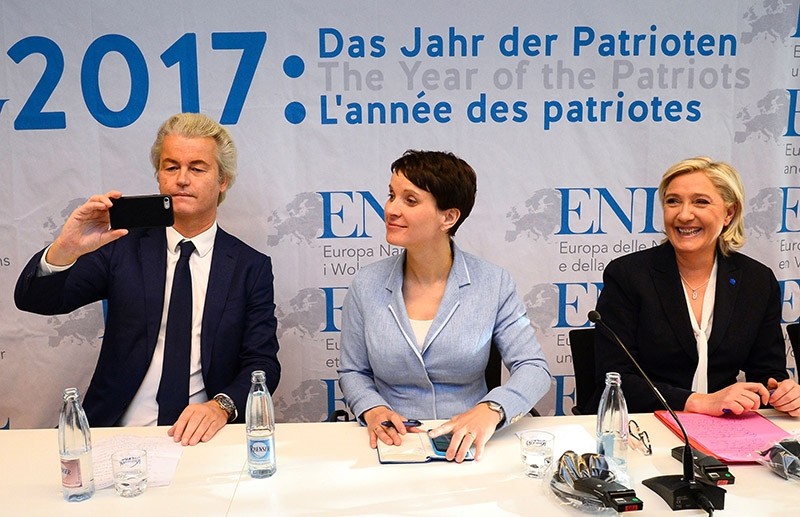 French presidential hopeful Marine Le Pen declared Saturday that 2017 will be the "year of the awakening of the people of continental Europe" as she joined fellow nationalist leaders in Germany at the beginning of a year of high-stakes national elections.

Populist parties have been surging in polls in Europe and the leaders' mood was celebratory as they came together in support of one another, the day after Donald Trump was sworn in as U.S. president following a campaign buoyed by anti-establishment and protectionist themes.

"Yesterday, a new America. Today — hello Koblenz — a new Europe!" Dutch anti-Islam leader Geert Wilders said as he opened his speech at a congress center on the banks of the Rhine river, under heavy security.

Wilders' anti-Islam Party of Freedom could win the largest percentage of votes in the March 15 Dutch parliamentary election. Le Pen is among top contenders in France's April-May presidential vote. And in September, Petry's party hopes to enter the German parliament.

The meeting of the Europe of Nations and Freedom group in the European Parliament also featured Matteo Salvini of Italy's Northern League and Harald Vilimsky, the general secretary of Austria's Freedom Party, which last year narrowly failed to win the country's presidency.

The first "real blow to the old order" was last June's British vote to leave the European Union, she said — followed closely by Trump's election. The new U.S. president, she said, "will not support a system of oppression" in Europe.

She denounced the EU as "a force of sterilization," and assailed German Chancellor Angela Merkel — whose name was booed loudly — for allowing in large numbers of migrants.

"Everyone sees that this migration policy is a daily disaster," Le Pen said.

Left-wing protesters staged a sit-in outside the hall shouting slogans like "no border, no nation, stop deportation."

Not far away, demonstrators from the global AVAAZ activist group placed statues of Adolf Hitler, Benito Mussolini and Josef Stalin, among others, in front of a landmark statue of German Kaiser Wilhelm.

AVAAZ organizer Pascal Vollenweider said the statues of the dictators were meant to send a "strong message" to the nationalist politicians meeting that "global citizens are rejecting their old dangerous ideas."

"They are not fascists in jackboots, it's a different type of fascism, of course, but if you look at the ideas ... it's very dangerous, and we have to face it: these guys are carrying old, dangerous fascist ideas," he said.

Marcus Pretzell, Alternative for Germany's European lawmaker and Petry's husband, denied accreditation to German public broadcasters and several other German outlets. Public broadcaster ARD has said it was refused access for "not meeting journalistic standards in its past reporting on the party," a claim it has rejected.

Pretzell opened the congress lamenting the current state of the EU, its passport-free travel zone and the euro. He praised Trump's opposition to trade agreements such as a planned EU-U.S. trade deal, and said that "we have a problem with political Islam."

"Who would still want to become a member of the European Union of their own free will?" he asked.

"We have to turn back some steps that have gone too far," he said. "The solution is sitting in this room."