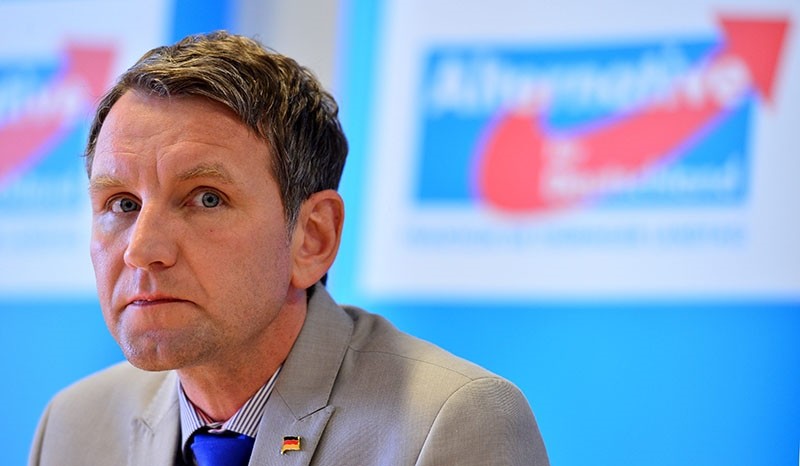 The file picture dated 17 May 2016 shows Bjoern Hoecke, head of right-wing party Alternative for Germany (AfD) during a press conference at the state parliament of Thuringia in Erfurt, Germany. (EPA Photo)
by reuters
Jan 24, 2017 12:00 am

The right-wing Alternative for Germany (AfD) has not yet decided whether to expel one of its state leaders for criticizing Berlin's Holocaust Memorial, the party's co-head said on Tuesday.

Bjoern Hoecke, AfD head in the eastern state of Thuringia, described the memorial as a "monument of shame" in a speech in Dresden last week.

The comment stirred anger across Germany but was cheered by some far-right AfD supporters.

Parliament is due on Wednesday to discuss the possibility of putting some AfD members under observation by domestic intelligence agency BfV, said Green party lawmaker Volker Beck.

Government officials have said they do not currently see a need to monitor the AfD, but keep a close eye on individuals with extremist views.

Hoecke said on Monday the party had dropped plans to throw him out, but its national co-leader Frauke Petry told German broadcaster MDR on Tuesday that was not the case, adding the comment had damaged the party's reputation.

The AfD's anti-immigrant rhetoric has won support among Germans worried about the influx of more than a million migrants in the past two years, though other major parties have rejected it as a potential coalition partner.

It is expected to win seats in national elections on Sept. 24, and a poll released Tuesday by Insa for the Bild newspaper gave it 14.5 percent support, up one percentage point from a survey conducted last week.

Petry told MDR the party's executive committee viewed disciplinary action against Hoecke as necessary, but officials were still assessing his speech and how it compared to the party's views.

"We are simply taking the time to do a thorough assessment in such a serious case," Petry said.

Petry said that, while the AfD wanted to see a more "differentiated approach to history", nothing in its program called for a radical change in Germany's approach to commemorating the genocide of Jews and others during the Nazi era.

Hoecke said the party's debate about his remarks reflected a power struggle.

Critics say Hoecke and his backers are seeking to wrest control of the party from more moderate members.

In the Insa poll, Chancellor Angela Merkel's Christian Democrats dropped one percentage point to 32.5 percent while the Social Democrats, junior partner in the ruling coalition, remained unchanged at 21 percent.

The Holocaust Memorial, located near the Brandenburg Gate in the heart of Berlin, comprises 2,711 tombstone-like slabs of granite of varying heights, arranged in a grid pattern.