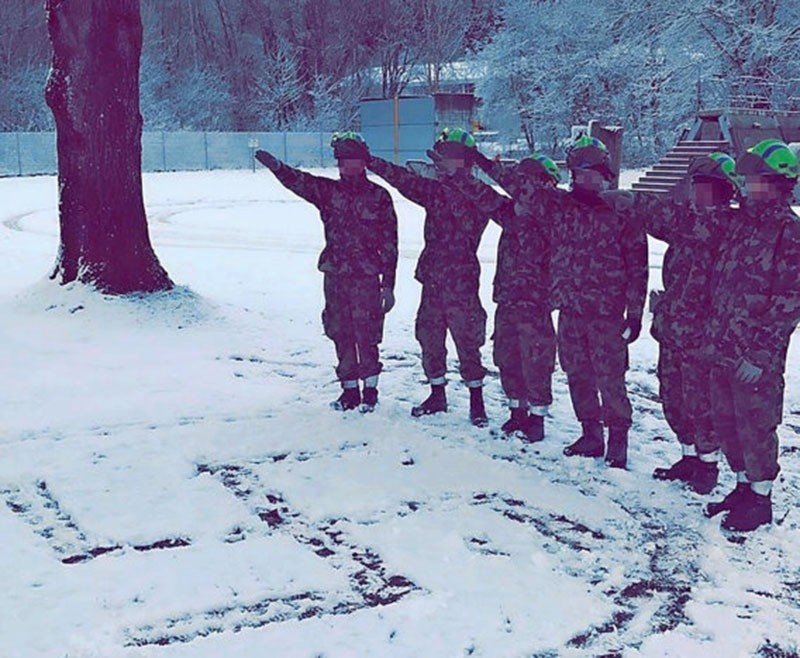 This photograph, showing six Swiss soldiers stretching out their arms in a Hitler salute, was submitted by an unknown reader to the u201cBlicku201d news portal. (Photo courtesy of Blick.ch)
by daily sabah Jan 24, 2017 12:00 am

Six soldiers of the Swiss army are reported to have stretched out their arms in a Hitler salute and drawn a huge Swastika in the snow in Switzerland's capital Bern.

Photographic proof of the far-right soldiers standing in a row and making the gesture was submitted to the Swiss news portal "Blick" by a reader last Friday.

According to "Blick", the photograph was taken by a group leader on the military training area in the small Swiss town of Wangen an der Aare.

After news of the far-right incident emerged, Army Spokesman Christoph Brunner announced that the military police had launched an investigation, in addition to the investigation of the on-call duty examining magistrate of the military tribunal.

"The army does not tolerate any form of extremism, nor any corresponding symbols and gestures. In cases of extremism, existing legal bases are consistently applied by the army and the military administration," said Brunner.

This is not the first extremist incident in the Swiss Army. Previously a lieutenant-colonel was enthused about a lecture by Nazi-Field Marshal Erwin Rommel, while four privates at a military school in the Swiss town of Isone are also reported to have greeted each other with the Hitler salute.

The Swiss Army is currently based in Wangen an der Aare, which has a long history as a military center. The modern-day base grew up around the riverside warehouses, where field howitzer units were stationed in World War I. Today the small town is the Transport Corps' main center and a training-place for disaster relief and rescue units.