3 dead as conflict flares up in eastern Ukraine 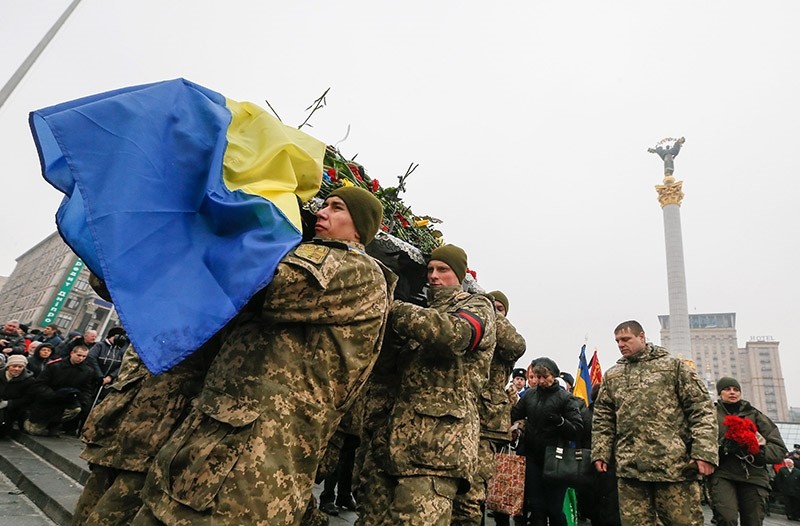 Comrades carry coffins with the bodies Ukrainian soldiers during a funeral ceremony for seven servicemen who were killed in the eastern Ukraine conflict near Avdiivka city, at the Independence Square in Kiev, Ukraine on Feb. 1, 2017. (EPA Photo)
by Feb 01, 2017 12:00 am

One Ukrainian soldier and two civilians have been killed and several others wounded in the past day as heavy fighting continues between government forces and Russian-backed separatists in Ukraine's east.

The Ukrainian military reported one dead and several wounded on Wednesday amid at least 86 attacks in the past day in Ukraine's two eastern most regions, Donetsk and Luhansk, which border Russia, according to a statement.

Two coal miners were also killed on their way to work during shelling around the town of Makiivka in the Donetsk region, the rebel-aligned Donetsk News Agency reported.

The conflict in eastern Ukraine erupted in early 2014 as Ukraine ousted its pro-Russian president amid mass protests calling for closer ties with the European Union.

Russia condemned the ouster as a Western-backed coup and responded by annexing Ukraine's southern peninsula of Crimea - the site of a major Russian naval base - and supporting loyal rebel forces in Ukraine's east.

The conflict, which has been simmering in eastern Ukraine for three years, is likely to take precedence as Ukraine assumed the month-long presidency of the United Security Council on Wednesday.

Merkel described the situation in eastern Ukraine as "alarming" and emphasized that the Ukrainian government must do its part to salvage a ceasefire regime that has largely failed. About 10,000 have been killed in the conflict, according to estimates by the UN.