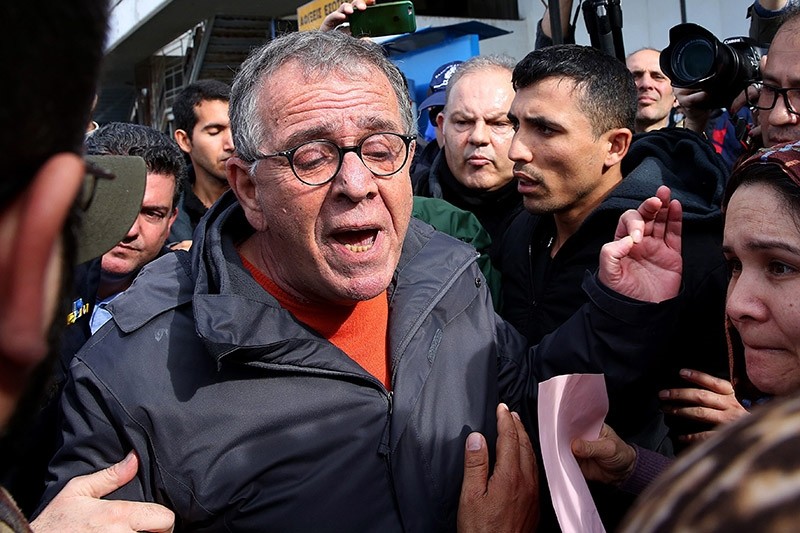 Greek Migration Minister Yannis Mouzalas struggles to get through a crowd as Afghan migrants stage a protest in the former airport of Athens that is used as a refugee camp, in Athens, Greece on Feb. 6, 2017. (EPA Photo)
by Anadolu Agency Feb 06, 2017 12:00 am

Scuffles broke out at a makeshift camp set up by migrants in Athens on Monday as protesters blocked a Greek government minister from visiting.

Refugees and migrants tried to stop Migration Minister Giannis Mouzalas from entering the camp which is on the site of the city's former international airport.

About 2,000 refugees and migrants, the vast majority from Afghanistan, were angry over poor living conditions at the site.

On Sunday, some refugees started a hunger strike.

Mouzalas's visit resumed a few minutes after disturbances between police and those refugees who had chained the main gate of the camp shut.

The situation was resolved after a few minutes and Mouzalas managed to enter the area.

"There is no hunger strike in Elliniko," Mouzalas said in comments broadcast on Greek television, stating it was a group of 30 refugees responsible for the scuffles.

"The so-called hunger strikers blocked the entrance of the trucks bringing food yesterday and we had to use the back door," he added.

"I understand the pain of these people but we will not allow the violation of Greek laws in order to set up manipulated standoffs," he said.

"They [government and police] used force to make the place operate again while violently suppressing the refugees' just protest.

"For more than 15 minutes they were pushing, kicking and beating refugees, while even hurting a child."

Refugees and migrants occupied the former airport site more than a year ago, setting up tents and turning it into a makeshift camp. NGOs provide for those currently staying there.

Greek company Lamda Development is in charge of the regeneration of the Elliniko airport site but this has been halted partially because of the refugees residing there.