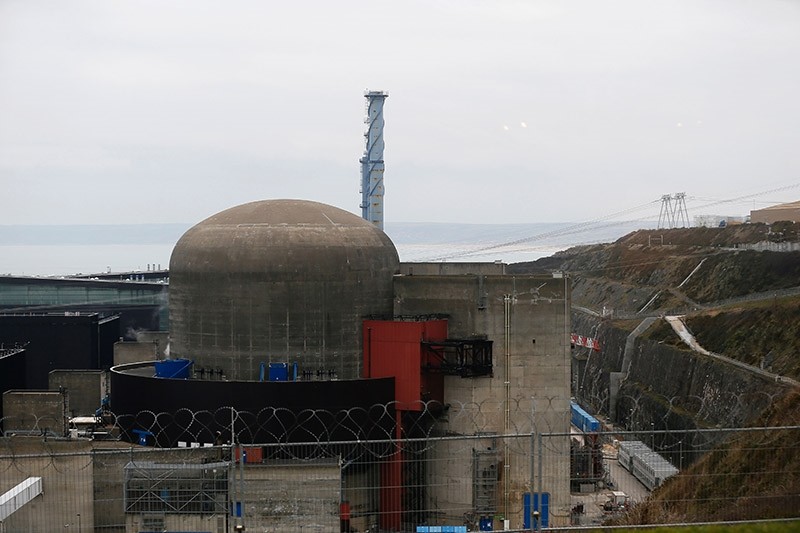 Photo taken on Feb. 9, 2017 shows nuclear reactor number 1 (,Flamanville 1,) of the Flamanville nuclear plant after an explosion at the plant in Flamanville, northwestern France. (AFP Photo)
by Daily Sabah with Wires Feb 10, 2017 12:00 am

A blast in a nuclear power plant's turbine hall Thursday on France's northwest coast did not cause a radiation leak or lead to any casualties, operator EDF and local authorities said. However, the issue raised concerns about nuclear safety and security in the Western European nation.

EDF said the staff at the Flamanville plant in Normandy immediately brought the fire under control. The cause of the fire, in the machine room of the No. 1 reactor, was under investigation and has not yet been identified.

Fire officers checked five of the plant's workers to see if they were suffering from smoke inhalation but they did not require further medical attention, said Olivier Marmion, a regional official.

Foul play was ruled out as a cause of the fire, with initial suspicions focusing on a possible electrical short-circuit, Marmion said. EDF said the plant's No. 1 reactor was subsequently disconnected from the grid — a normal operating procedure in such circumstances.

Flamanville has two 1,300-megawatt reactors, in operation since 1985 and 1986. Nearly 80 percent of France's electricity production is generated from nuclear power.

In the meantime, environmental NGO Greenpeace called on French authorities to disclose the information regarding the cause of the blast to the public as soon as possible, while also noting that the Flamanville blast is the third explosion in French nuclear power plants in the past week and a half, referring to two blasts that occurred at the Cattenom nuclear reactor, located in the northeastern French department of Moselle.

The previous explosion at Cattenom nuclear power plant occurred on February 1, French media outlets reported on Friday, while also noting that the three explosions had occurred within 10 days of one another.