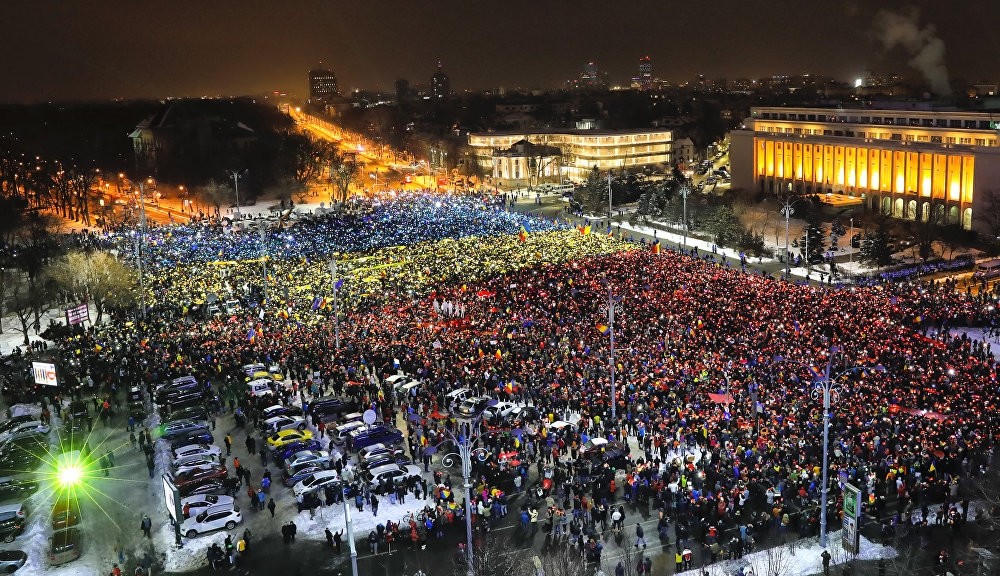 In Bucharest, protesters created a huge Romanian flag with their mobile phones. (AP Photo)
by Compiled from Wire Services Feb 13, 2017 12:00 am

Engulfed by the biggest post-Communist protests for the last two weeks, Romanian parliament has agreed to hold a referendum on public support for fighting official corruption

After mass street protests forced the government into an embarrassing U-turn over a graft decree, Romania's parliament on Monday unanimously endorsed a presidential plan to hold a national referendum over anti-corruption reforms, a move that failed to appease anti-government protesters who gathered for another demonstration in the country's capital.

All 310 lawmakers present voted in favor of the referendum proposed by President Klaus Iohannis, a strong supporter of the country's anti-graft drive.

President Klaus Iohannis, a former leader of the center-right opposition, blasted the government over the decree that would have effectively shielded dozens of public officials from prosecution and torpedo a drive to stamp out high-level graft.

The architect of the decree, Justice Minister Florin Iordache, resigned last week, citing a need to appease public opinion in the European Union member state of 20 million, and arguing he had done nothing wrong.

The month-old Social Democrat government rescinded the decree one week ago after the biggest protests in the country since the fall of communism in 1989.

Iohannis now needs to come up with a timeframe to hold the referendum. While the wording on the ballot paper is up to the president, he said last month he wanted to hold the vote to see "the sovereign desire of Romanians," over the anti-graft drive. According to law, a 30-day campaign must take place before the vote.

Parliament, where the ruling coalition holds a big majority, must still vote on whether to confirm the decree's withdrawal.

It was not clear what question will be presented to voters, but the referendum was seen as a way to bolster support for the ongoing fight against corruption.

On Friday, Liviu Dragnea, the Social Democrat leader and lower house speaker, said parliament should meet to approve the withdrawal as soon as possible. Parliament's vote on the presidential referendum plan was a necessary procedural step, but its opinion is not binding.

Romania has seen its biggest anti-government protests since the end of communism in the nearly two weeks since the center-left government issued a decree diluting anti-corruption laws. Premier Sorin Grindeanu withdrew the decree, but nightly demonstrations have continued to draw large crowds demanding resignation of the government that assumed power last month.

The decree, which sparked concern in Brussels and Washington, would have made abuse of power a crime punishable by jail only if the sums involved exceeded 200,000 lei ($47,500). Critics say that this would have let off the head of the PSD, Liviu Dragnea, who is currently on trial for alleged abuse of power. He denies the charges and that he would benefit.

Late Monday, hundreds of people assembled outside the government offices in Victory Square, braving subzero temperatures for the 14th consecutive night of protests. Some waved Romanian flags and chanted "Resignation!" to the beat of drums. Huge protests have taken place in Bucharest, the capital, and large cities around the country.