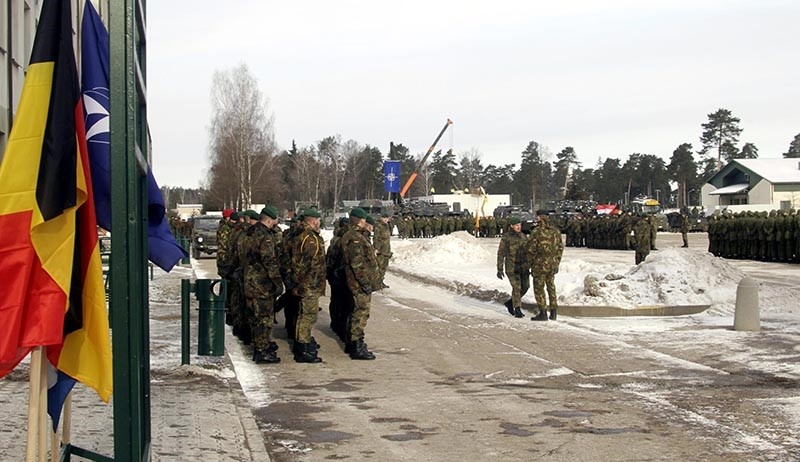 German soldiers attend a welcoming ceremony for the first troops of the NATO enhanced Forward Presence (eFP) battalion group at the Rukla base in Rukla, Lithuania (EPA Photo)
by Feb 17, 2017 12:00 am

A NATO diplomat told German newspaper Spiegel that he viewed the recent fake news incident claiming that German soldiers raped an underage Lithuanian girl as a Russian attempt to undermine the new NATO mission and to turn sentiment against the alliance.

The incident took place as NATO and the United States are deploying an unprecedented amount of troops in Eastern Europe, in response to the Russian takeover of the Crimean peninsula and its continued support of fighting in Eastern Ukraine,

The first battlegroup of over 1,000 soldiers, led by the German army, is being deploying in Lithuania. It will soon be joined by similar battlegroups in Estonia, Latvia and Poland, which will augment smaller detachments of U.S. troops stationed there since the Crimea crisis.

"It is without doubt that presence of NATO forces in Lithuania will remain a target of hostile propaganda, so both informational and physical provocations are likely," the spokeswoman of Lithuania's State Security Department, a counter-intelligence body, told Reuters.

German officials have for months warned about the spread of fake news on the Internet and called for greater transparency.

The BfV domestic intelligence agency last year expressed concern that Russia might try to interfere in this year's German federal elections and also warned that there was a rise in Russian propaganda and disinformation campaigns.

German media reported last week that the BND foreign intelligence agency had found no proof of a Russian disinformation campaign against the government in a study.

Lithuanian prosecutors opened a criminal investigation into a false report of rape by German soldiers stationed there as part of NATO a mission to deter Russia.

The investigation comes among fears that Russia is using disinformation campaigns to influence opinion and elections in the West.

Russia denies being involved in any cyber warfare targeting Western governments and institutions.

"It is likely that the false report was spread in order to discredit the presence of the NATO forces in Lithuania," the spokeswoman of the speaker of Lithuanian's parliament was quoted by news wire BNS.

An email sent to the speaker's office on Tuesday evening claimed that a group of German speaking men last week surrounded and raped a 15-year-old girl from a foster care home in Lithuanian town of Jonava, close to German army barracks.

Police were informed but found the report to be false, so a criminal investigation into reporting a false crime was started instead, Darius Valkavicius, chief prosecutor of Kaunas region told Reuters.

"Initial conclusions indicate that the email was sent from a third-party country, that is, from a country outside the European Union," said Valkavicius.

The email address used to send the email had been checked and it no longer existed, said a spokesman for German Defence Ministry.

Asked about whether Russia could have been involved, he said he could not comment on who sent the email or why as German authorities had no information on that.

The spokesman said: "The fact is it was deliberately false information."