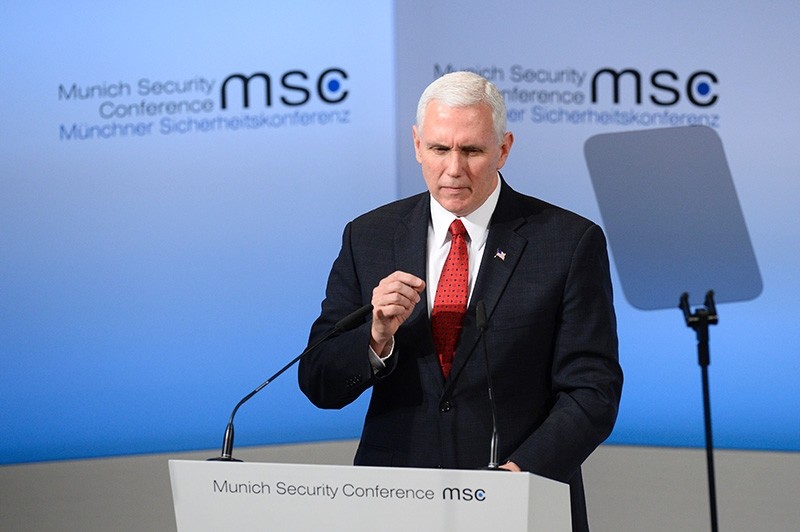 US Vice-President Mike Pence Saturday pledged an "unwavering" commitment to transatlantic ties, in an emphatic reassurance to allies including German Chancellor Angela Merkel who pleaded with nations not to go it alone.

Capping a week of whirlwind diplomacy by American officials who have descended on Europe to calm nerves rattled by Donald Trump, Pence underlined the United States' devotion to its old friends.

"The United States is and will always be your greatest ally. Be assured that President Trump and our people are truly devoted to our transatlantic union," he told European leaders including Merkel at the Munich Security Conference.

"The promise to share the burden of our defense has gone unfulfilled for too many, for too long and it erodes the very foundation of our alliance," he warned, stressing that "the time has come to do more".

At the same time, he did not go further and threaten, as Trump had done, to walk away if the allies failed to pay their way.

"We will meet our obligations to our people to provide for the common defense, and we'll continue to do our part to support our allies in Europe and in NATO," he said.

Trump's criticism of NATO as "obsolete", his praise for Britain's decision to leave the European Union as well as his softer approach towards Russia unnerved Washington's allies.

But over the past week in Europe, key members of his administration have pressed the message that the United States is not retreating into isolation but remains committed to its global role.

At NATO in Brussels on Thursday, Defense Secretary James Mattis said Russia must first "prove itself" and respect international law before there can be any improvement in relations strained to breaking point by Moscow's Ukraine intervention and annexation of Crimea.

Mattis said the transatlantic bond was "as strong as I've ever seen it", and stressed America remained "rock solid" in support of Article 5 -- NATO's core "one for all, all for one" collective-defense tenet.

Likewise, Secretary of State Rex Tillerson was cautious in his dealings with Russia.

Following his first sit-down with Russian Foreign Minister Sergei Lavrov in Bonn on Thursday, Tillerson said the US would cooperate with Moscow but only when doing so "will benefit the American people".

Trump's envoys also held to a hard line on continuing sanctions against Russia over Ukraine.

Explaining the apparent policy back-and-forth, senior US Senator John McCain said Trump sometimes "contradicts himself, so some of us have learnt to watch what the president does as opposed to what he says".

"Make no mistake, these are dangerous times, but you should not count America out," he said in Munich on Friday.

'Won't give up on Russia'

They work both ways, they said, and benefit the United States as much as Europe.

Merkel on Saturday warned countries not to retreat from the international cooperation which she says is the only way to solve global problems.

"In a year in which we see unimaginable challenges we can either work together or retreat to our individual roles. I hope that we will find a common position," she said.

This includes working not only with Western partners, but also with Russia if possible and if Moscow once again respected the sovereignty and territorial integrity of other states such as Ukraine, she said.

She said it was "regrettable" that Europe had not managed to reach a stable relationship with Russia over the last 25 years.

"I will not give up on finding a way for better relations with Russia despite our different views on many questions," she said, hours before Russian Foreign Minister Sergei Lavrov was due to address the forum.