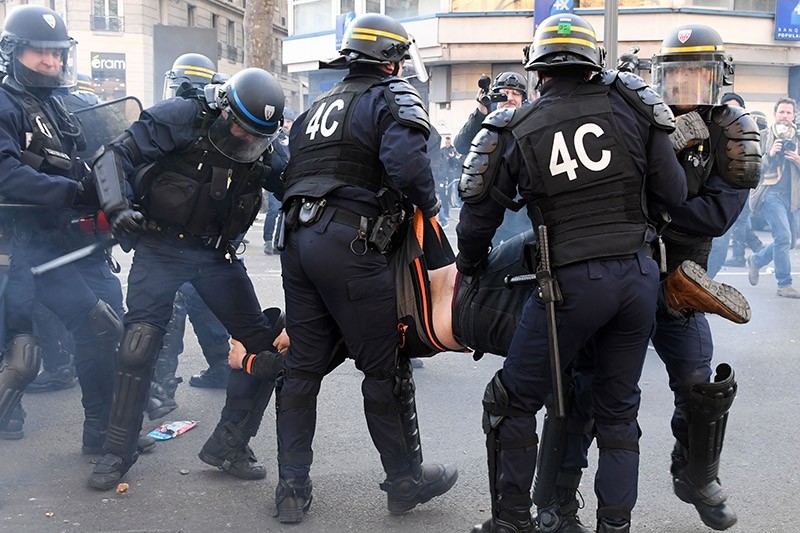 Anti-riot police restrain a protestor during a demonstration against police brutality on Feb. 18, 2017 on the place de la Republique in Paris, France. (AFP Photo)
by Mehmet Solmaz Feb 19, 2017 12:00 am

Paris police sprayed tear gas and arrested 13 demonstrators on Saturday at a rally meant to support a young black man who was severely beaten and raped with a police baton and other victims of police abuse.

Demonstrators carried banners reading "Justice for Theo," citing the name of the 22-year-old alleged rape victim. The protesters stressed that Theo is just one example of many young minority men unfairly targeted by French police in ID checks and most of the times abused.

One officer has been charged with rape in the case, and three others with aggravated assault. Although video footage portrays the brutality very clearly, all four officers deny intentional wrongdoing.

"Living in the public space is not the same, depending on the color of your skin," Thuram said. "We're in 2017. This is a real shame."

Protestors clash with police in Paris, as protests over the alleged rape of black man by cops continue across Francehttps://t.co/XMiWU3QRv5 pic.twitter.com/VMQAu3VgQd

While he was talking, police installed a security perimeter around Paris' Place de la Republique. Before the protests turned violent, demonstrators went close to the police barricades and continuously shouted, "We won't forget, we won't forgive."

Some of these youth spoke to Daily Sabah, expressing their concerns over rising racism and discrimination in the country.

The attack in a Paris suburb sent shockwaves across the country, with clashes between protesters and police in cities as far afield as Brittany, Calais and Normandy as well as districts across Paris.

Since Theo was injured on Feb. 2, over 200 people have been arrested during widespread demonstrations.

In an emotional video released after he left hospital, Theo, flanked by his mother and sister, said, "I am very tired. The wound has not yet recovered."

He was arrested by four police officers in the suburb of Aulnay-sous-Bois, and said he was sodomized with a truncheon as well as being racially abused, spat at and beaten around his genitals.

This is a struggle for equality

Juliette Chapelier, a representative from the National Union of Students of France, told Daily Sabah that she is concerned over discriminatory measures and injustice by the police department and other public institutions.

"Police are not doing their job. They don't consider people equal though they should be there to make sure everyone is protected and treated justly," she said.

Another Parisian, Passynia Luwansangu-Mondo, said the rise of discrimination brings with it poverty and social problems.

"This is dangerous for our future," he said.

Commenting on the rising support for Marine Le Pen, the anti-immigration candidate in France's election, Mondo said the result of the April 23 elections will not be the end and people will continue their "legal right to protest injustice."

Thes Baleur says she is one of the organizers of the demonstration which "aimed to send a message that the latest incident is only one of many police wrongdoings."

Denouncing the excessive force and discriminatory moves of the police, Belaur says immigrants should not be used as a frightening tool for politicians or state institutions anymore.

"We call on people from all sorts of backgrounds to stand united and show that we can live together," Belaur said.

No justice no peace

Abdelaziz Mounde, an African-French local journalist, says the government has to deal with the issue and stop sweeping the problems to the corner.

"If there is a problem, one should seek the cause and the base of that issue. People talk about violence and riots but they do not address the discrimination against those living in the 'banlieues' of Paris. Police, NGOs and all the government institutions should show sincerity and try working for justice. If things continue this way, the problems will only get worse," he said.

Mounde added that the increasing support for Le Pen is not surprising since there is no one to address the base of the problems.

"Then, people go for the other option: Populists," he said.