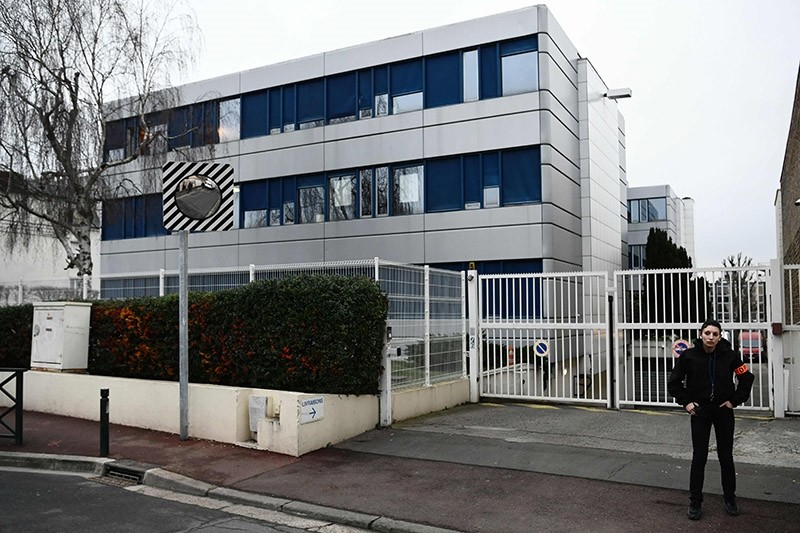 A security personnel stands in front of the French far-right Front National (FN) headquarter in Nanterre on Feb. 20, 2017 during a search of the party's offices as part of a case of misusing public funds. (AFP Photo)
by Compiled from Wire Services Feb 21, 2017 12:00 am

The headquarters of the French far-right party National Front were raided by police over an alleged fake jobs scandal. The FN dismissed the police search, claiming that it aims to disturb the smooth running of their presidential campaign

French police raided the headquarters of the far-right Front National (FN) yesterday over allegations the party was fiddling European Parliament expenses to pay for assistants, a source close to the investigation said. The FN criticized the probe as politically motivated in a statement issued yesterday, saying the French government was trying to "hinder, spy on, and intimidate the patriotic opposition."

The raid at the party's headquarters in Nanterre, west of Paris, came a day after police searched the home of founder Jean-Marie Le Pen, as well as the office of his secretary and an accountant linked to the party.

The case relates to 20 assistants to FN members of the European Parliament in Strasbourg, who were also listed as party workers.

Investigators are trying to determine whether the FN drew European Parliament funds to pay for the assistants by giving them fake jobs in Strasbourg, while they continued to work for the party elsewhere.

The case was initially launched by European Parliament anti-fraud authorities in early 2015, before the case was passed to Paris.

Earlier this month, Le Pen missed a deadline set by the European Parliament for her to make an initial repayment of 298,000 euros. Le Pen has denied any wrongdoing, arguing that the allegedly fictional job contract was submitted as part of an accounting adjustment.

The conservative candidate in France's presidential race, former premier Francois Fillon, has also been hit by allegations that his wife was paid for years as his assistant in the French parliament but never actually worked there. Fillon has asserted that he is the victim of a smear campaign orchestrated by the ruling Socialists. Fillon, a staunch Catholic who won the Republicans nomination in November by campaigning as a man of integrity, was the long-time frontrunner in a race that has turned into a rollercoaster. The main beneficiary of his woes has been Macron, a 39-year-old former investment banker who served as economy minister under outgoing Socialist President Francois Hollande.

The scandal has also coincided with the choice of a hard-left presidential candidate by the Socialist party in Benoit Hamon, a move also seen as good for Macron's prospects. A group of right-leaning Socialist lawmakers wrote in Le Monde newspaper on Tuesday that they could not back Hamon, the clearest sign yet that his appointment could tear the party apart, with some lawmakers tempted to join the Macron camp.

Through the twists and turns of the race Le Pen's support has remained constant. The candidate who wants France to drop the euro and pull out of the EU has a solid foundation, with 74 percent of her supporters who say they will "definitely" vote for her, according to a new study by a leading university think tank, CEVIPOF. In the survey of nearly 16,000 respondents, Le Pen came out on top as the candidate who "worries" the French the most, but also as the one "who really wants to change things."