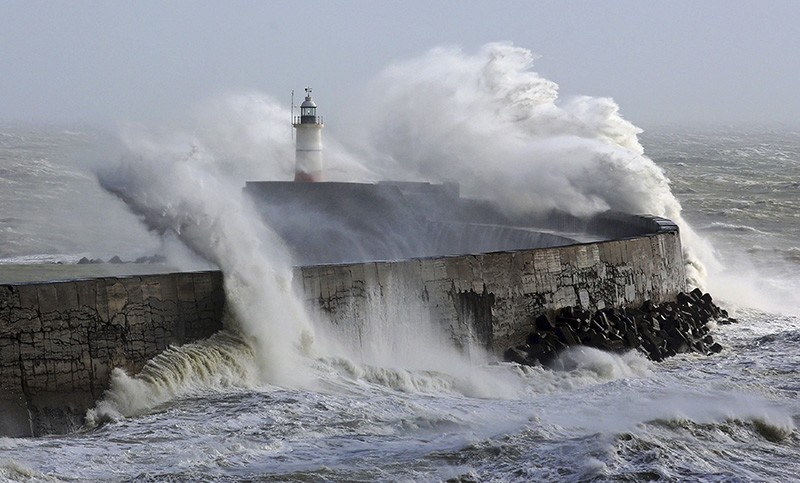 Waves crash over the lighthouse in Newhaven, East Sussex southern England, as flights were cancelled and commuters were warned on delays as winds reached nearly 90mph when Storm Doris battered many parts of Britain, Feb. 23, 2017. (AP Photo)
by Compiled from Wire Services Feb 23, 2017 12:00 am

"Storm Doris has rapidly deepened over the last 24 hours as it has undergone what we call explosive cyclogenesis, making it a weather bomb," the Met Office, Britain's national weather forecaster, said on Twitter.

A "weather bomb" occurs when the pressure inside a depression plunges and produces severe winds, the Met Office said.

A woman died in Wolverhampton city center, 140 miles (225 kilometers) northwest of London in the English West Midlands, after she was hit by debris from storm damage around midday.

West Midlands Ambulance Service said it had responded to a report of a woman with "very serious head injuries," who was confirmed dead at the scene.

The service said paramedics had also treated two elderly men who were injured when their car was hit by a falling tree near Church Stretton in Shropshire.

Engineers had restored electricity supplies for about 19,000 of the affected customers by early afternoon, the company said.

Across the border in Northern Ireland, electricity provider NIE Networks said power had been cut to some 21,000 customers, but engineers had repaired faults affecting 14,000 of them.

Rain, snow and strong winds of more than 90 mph (145 kph) from a weather system dubbed Storm Doris closed U.K. roads, canceled flights and for a time halted train travel to and from Euston Station, one of London's main terminals.

In London, firefighters said they had responded to about 20 incidents caused by the storm on Thursday morning, including fallen trees and collapsed scaffolding.

London's Heathrow airport, Europe's busiest air travel hub, said it would operate a reduced flight schedule on Wednesday to ensure passenger safety, and about one in 10 flights was canceled.

The airport warned that it expected the storm to cause flight delays and cancellations across the country.

An Icelandair flight from Reykjavik declared an in-flight fuel emergency after aborted attempts to land at both Manchester and Liverpool airports in northwest England. It eventually landed successfully in Manchester.

In the Netherlands, the landing gear on a small passenger plane collapsed as it landed in heavy winds at Amsterdam's Schiphol Airport. Nobody was injured in the heavy landing, which was recorded on a video posted on Dutch news sites showing the right landing gear of the twin-prop airplane operated by Flybe collapsing as it touched down.

Schiphol said in a statement that 59 people were on the plane.

Flybe confirmed "an incident" at Schiphol involving flight BE1284 from Edinburgh to Amsterdam.

"We can confirm that there are no injuries and all passengers have been bussed to the airport terminal," the carrier said in a statement.

The landing came as powerful winds battered the Netherlands, causing traffic chaos and blowing roofs off some buildings but no other major incidents.

The Met Office issued severe weather warnings for snow and ice in much of Scotland and northern England until early Friday.

The storm brought heavy snow to parts of Scotland early Thursday, badly affecting road traffic and causing delays and cancellations to some flights.