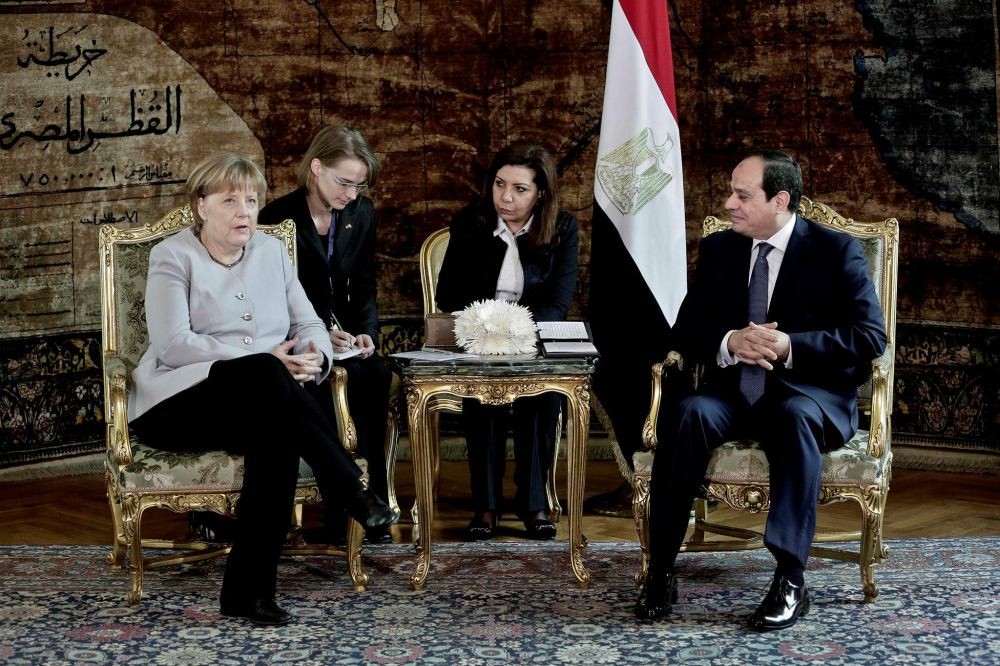 In a push to limit migrant flows to Europe through North Africa, especially chaos-torn Libya, German Chancellor Merkel met Egyptian President el-Sissi in Cairo for the first time after meeting him in Berlin in 2015

German Chancellor Angela Merkel landed in Cairo yesterday on a two-day trip to Egypt and Tunisia, with her office saying she would focus on migration, economic cooperation between Germany and Egypt, the political unrest in Libya and Egypt's human rights record. The trip is part of a larger diplomatic push by Merkel, who last year visited Mali, Niger and Ethiopia. She had also planned a trip to Algeria last week, but it was called off after President Abdelaziz Bouteflika felt ill.

A major focus in Egypt and Tunisia will be on their troubled neighbor Libya, a largely lawless country that has porous desert borders with Algeria, Niger, Chad and Sudan. "Without the political stabilization of Libya, we won't be able to stop the human traffickers operating out of Libya who are responsible for by far the most arrivals in Italy," Merkel said in her latest weekly podcast. "Egypt, as a regional institution, as a regional power, plays a major role here, as do Algeria and Tunisia."

Merkel, who faces elections in September, has been under intense pressure to reduce the number of asylum seekers coming to Germany, which has taken in over 1 million migrants since 2015. Her government has urged the Maghreb states and Egypt to step up border controls and speed up repatriations of migrants whose asylum applications are rejected.

This was Merkel's first visit to Egypt since Abdel-Fattah el-Sissi was elected president. She previously visited Egypt in 2008 and 2009 and she also had received both his predecessors, the first democratically elected president Mohamed Morsi in the German capital. In her first visit to the country since 2009, Merkel will address the repatriation of failed asylum seekers in Germany and their living conditions once they return to Egypt.

During his term as president, el-Sissi has launched a crackdown on former President Mohammed Morsi, the country's first democratically elected leader who was overthrown by the military after mass protests in July, 2013, and the Muslim Brotherhood, the Islamist political party he once belonged to. Brotherhood members and supporters as well as other secular and liberal groups, have been widely arrested.

"Ensuring safe and swift returns of Tunisians and Egyptians who are not in need of protection is legitimate, as long as the procedures are fair," said Judith Sunderland, a Europe and Central Asia director for the group.

"It's another thing entirely to pursue dodgy deals that could trap asylum seekers and migrants from elsewhere in countries like Tunisia and Egypt that cannot guarantee decent treatment or meaningful access to asylum."
RELATED TOPICS