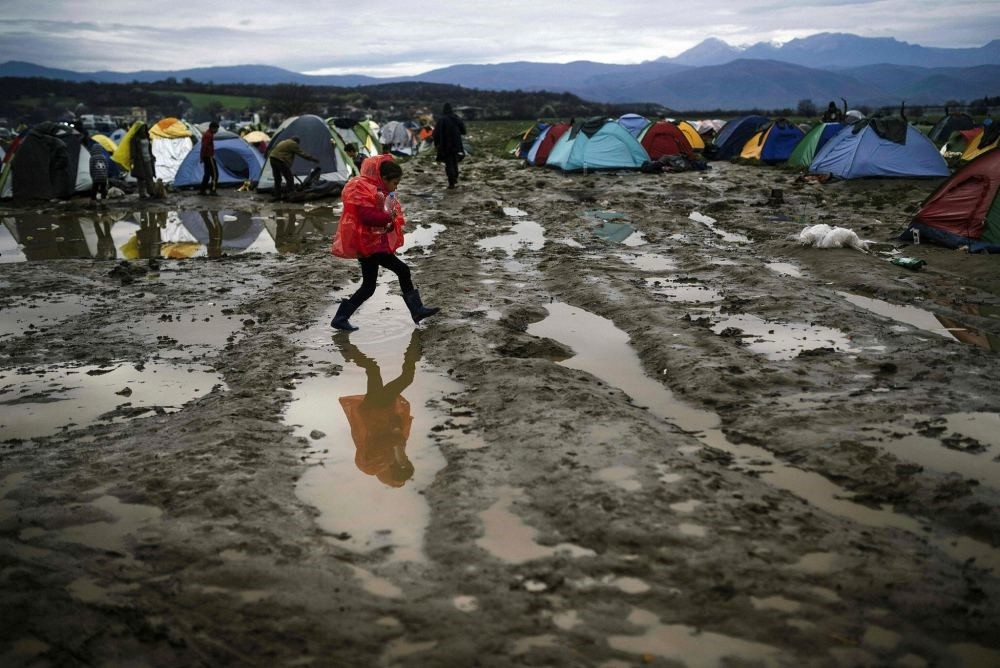 A girl walks in the mud in a makeshift camp at the Greek-Macedonian border, near the Greek village of Idomeni, where thousands of refugees and migrants are stranded by the Balkan border blockade.
by Yusuf Selman İnanç Mar 04, 2017 12:00 am

The European Union, which has failed to implement a comprehensive refugee policy, has relocated only 8 percent of refugees detained in camps as member states are reluctant to open their doors to even a few thousand people

The bloody civil war in Syria was considered a regional problem until the worst refugee crisis since World War II reached the gates of wealthy European countries. This had an impact on the war and determined policy toward Syria, Daesh and the region, but no one much thought about the movement of millions of displaced people. Syria's neighbors have taken in millions of refugees, built camps and accommodated people in its cities. Turkey is now home to more than 3 million refugees while the tiniest country in the region, Lebanon, has accommodated more than 1.5 million Syrians. Even conflict-torn Iraq, which is tackling Daesh and has had to deal with its own internally displaced people, has accepted hundreds of thousands of refugees.

Since almost every part of Syria, except the regime-held cities, has become a battlefield in the deadly war between the regime, the opposition and the extremists and militant Shiite groups, the number of refugees has dramatically increased. When statements regarding the number of refugees that would be taken in by the wealthiest countries in the world, like EU members, the U.S., Canada or Australia, weren't close to adequate, refugees started crossing the Mediterranean Sea by boat, which claimed thousands of lives, and walking to Europe.

The EU was reluctant to accept the refugees but somehow has been convinced to accept some hundreds of thousands. An agreement between Turkey and the EU was signed in 2015, according to which the refugees who are currently held in detention camps would be relocated and 3 billion euros would be given to Turkey to deal with the refugees' costs. However, despite the fact that Turkey has spent more than $10 billion, the EU has not kept its promise. Moreover, the EU also broke its promise to relocate the refugees who are already in European territories. Only 8 percent of the refugees have been relocated so far.

The violation of the relocation plan has caused disputes among the member states as "EU member states should intensify efforts, close up loopholes and increase cooperation to more effectively return migrants who do not qualify for staying in the bloc," the European Commission said Thursday. Dimitris Avramopoulos, EU commissioner for migration, spoke at the conference after EU leaders asked to review the return policy last month.

"The recommendations include better coordination among services and authorities involved in the return process, faster and more effective handling of return decisions and asylum requests and closing loopholes that allow migrants to abuse the system," the dpa reported. European countries have accepted less than 10 percent of the 160,000 refugees they promised to move to safety from unsanitary and cramped camps in Italy and Greece, leading the European Commission to warn it will "accept no more excuses". Only 13,546 relocations have been carried out so far – 3,936 from Italy and 9,610 from Greece – amounting to just 8 percent of the total the EU committed to relocate in 2015. Just two member states, Malta and Finland, have met their resettling obligations under the relocation scheme that will close in September," the Guardian wrote last week. "I want to be clear. There are no excuses for the member states not to deliver. It's possible … to relocate all these from Italy and Greece by September. It entirely depends on the political will and perseverance of member states to make it happen," Avramopoulos said. "The commission will not hesitate to make use of its powers under the treaties … So far infringements proceedings were not an option. We tried to convince member states to do their duty. But if it is the case [that no progress has been made] in the future, infringement proceedings might be an option," he added.

However, the EU is unlikely to overcome the migration issue as it causes new problems, primarily the rise of hate crimes. For instance, the German interior ministry said last month that nearly 10 attacks are made on refugees every day in Germany. A total of 560 people were injured in the violence, including 43 children, three-quarters of the attacks targeted migrants outside of their accommodation, while nearly 1,000 attacks were on housing, the ministry stated. In addition to the Syrian crisis, the political instability in Africa increases the number of illegal migrants who enjoy the power vacuum in Libya as the United Nations said last month 90 percent of illegal migrants arrive in Europe from Libya via boats. As many as 20 million African migrants could come to Europe in the near future, to the new president of the European parliament Antonio Tajani said.
RELATED TOPICS