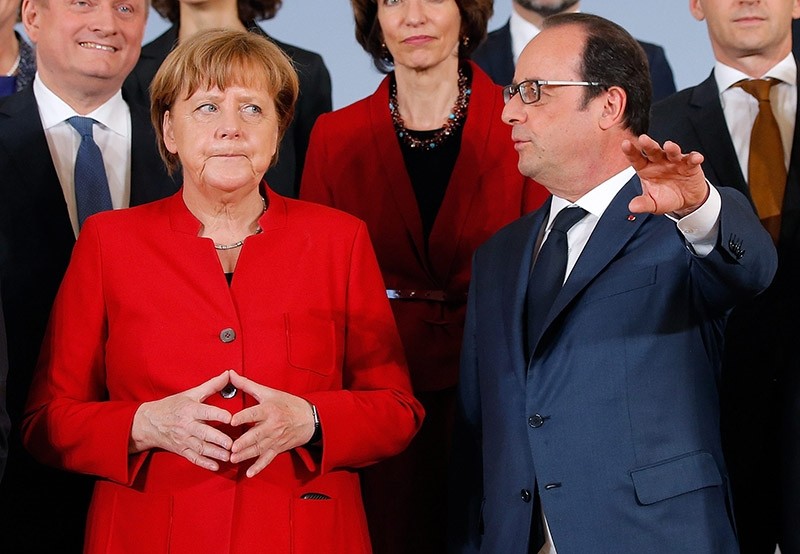 The heads of continental Europe's biggest economies meet in the gilded splendor of the Palace of Versailles on Monday, seeking ways of strengthening an EU facing Britain's exit and mounting populism.

"The idea is to try to give political momentum to the four nations," a French diplomatic source said.

The meeting comes in the run-up to celebrations on March 25 of the 60th anniversary of the Treaty of Rome, which founded what is now called the EU.

That date, combined with last year's referendum in Britain on leaving the EU and the rise of populist and nationalist figures, has triggered a wave of angst about Europe's future.

The EU faces legislative elections in The Netherlands this month, followed by presidential elections in France in April and May.

Far-right candidate Marine Le Pen is widely forecast to reach the runoff in the French vote, while the party of firebrand anti-Islam MP Geert Wilders is expected to perform strongly in the Dutch race. Merkel, meanwhile, is facing pressure from the hard-right populist party Alternative for Germany.

Of the five options that European Commission head Jean-Claude Juncker has proposed in a White Paper on the bloc's post-Brexit future, ranging from a simple single market to even deeper integration, Paris and Berlin have already made their choice: a "multi-speed" Europe.

In this scenario, countries wanting to move ahead on issues such as economic growth, border protection and defense could form smaller groupings, leaving reticent members behind.

"We certainly learned from the history of the last years that there will be as well a European Union with different speeds, that not all will participate every time in all steps of integration," Merkel said after a summit in Malta last month.

Berlin and Paris say the challenges of Brexit, coming after the Eurozone crisis, migration and the Ukraine conflict, make a fresh drive to bolster the EU's authority more urgent than ever.

Italy, Belgium, The Netherlands and Luxembourg have signed on to the multi-speed idea, as they worriedly eye the rise of anti-European parties.

But to avoid antagonizing member states who resist the idea, including many in eastern Europe, no concrete project is planned to be announced after the meeting in Versailles, which will be followed by a working dinner.