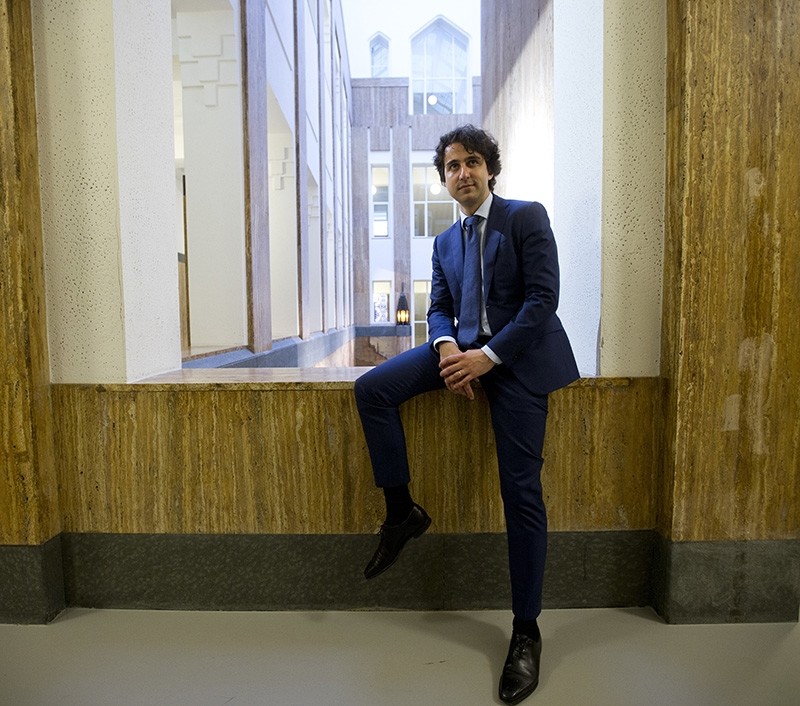 Dutch political observers say the youthful Jesse Klaver of Green Left Party, who is of Moroccan descent, is the antithesis of far-right politician Geert Wilders, who has run his campaign on an anti-immigrant, anti-Islam ticket

A boyish 30-year-old who looks like Justin Trudeau and sounds like Barack Obama has emerged as a potential kingmaker in Dutch politics, riding a rare message of tolerance ahead of an election dominated by anti-immigrant rhetoric.

Jesse Klaver, son of a Moroccan father and part Indonesian mother, is expected to turn his tiny Green Left party into one of the main groups in the Dutch parliament in a vote next week that has mostly made headlines because of a far right surge.

The election is mainly billed as a challenge by flamboyant anti-Islam nationalist Geert Wilders to conservative Prime Minister Mark Rutte, who has responded by campaigning on proposals for measures to curb immigration.

It is the first big vote in Europe in a year that will also see elections in France and Germany, where the far right is forecast to win its best showings since World War Two.

But with half of Dutch voters still undecided and no party expected to come close to a majority, Klaver has filled a void by speaking for those who yearn for a more inclusive message.

He has built up a strong following on social media and through small "meet up" events that began when he took over the party leadership in May of 2015.

Gatherings in living rooms grew to fill 100-seat theatres. This week he held the largest political rally of the entire Dutch election campaign, drawing a paying crowd of more than 5,000 to a packed Amsterdam concert hall. Five thousand more watched live on Facebook.

Dutch media said late Thursday that the rally staged by the Green Left party was the largest of its kind seen for many years in the Netherlands.

"Not since the 1980s in the days of the Dutch Communist Party (CPN) has there been such a large party gathering," Dutch news agency ANP said.

The youngest party leader in Dutch history, his dark curls and boyish looks give him an unmistakable resemblance to Trudeau, the Canadian premier known for welcoming refugees.

Supporters have co-opted a slogan from former U.S. president Obama, helped by the fact that Klaver's first name is pronounced in Dutch almost exactly like the English word "yes".

"Jesse we can!" supporters posted during the live online feed of the rally as a tie-less and confident Klaver told a cheering crowd that Dutch voters have a chance to stop Europe's drift towards the far right.

"This year is not only about the election in the Netherlands, but elections in the whole of Europe," he said.

"In the Netherlands, we have to show that populism can be stopped and there is an alternative. That alternative is us."

Dutch politics are fractious - there are 11 political groups in the 150-seat parliament now, most of them tiny.

But Klaver's success could turn the Left Greens into one of the handful of parties big enough to win a place in the ruling coalition, especially if mainstream parties link up to keep out Wilders, convicted last year of fomenting racial hatred.

"When I look to the international media, they are paying a lot of attention to Geert Wilders and that's not the Netherlands, it's just a part of the Netherlands," Klaver said in an interview with The Associated Press. "And you see that our party, we are gaining momentum and we are just the opposite of what is happening with Geert Wilders."

Polls show Klaver's Left Greens on course to quadruple their representation to 17 seats, while Rutte's center-right liberals shrink from 41 to somewhere around 25, not far ahead of Wilders' nationalists. If the polls prove to be correct, it will be the highest number of representatives that the party obtained since it first entered Parliament following 1989 elections. Its highest number of seats was 11 in 1998. Klaver is currently one of four Greens lawmakers in the 150-seat lower house.

For most Dutch, openness and tolerance are fundamental national traits of their small seafaring country. Holland has been a European haven for refugees since the 16th Century, when the mainly Protestant Dutch broke away from Catholic Spain, committed their new state to religious freedom and offered protection to persecuted minorities such as Spanish Jews.

Wilders argues that precisely that tolerance is threatened by Muslims, who he says practice a "totalitarian" faith. Muslims make up five percent of the Dutch population.

In a live television debate watched by 1.6 million viewers, Klaver shot back that right-wing populism, not immigration, is undercutting Dutch traditions.

"The values the Netherlands stands for, for many, many decades, centuries actually, its freedom, its tolerance, its empathy... they are destroying it," he told Reuters in an interview.

Klaver said that if elected, he would increase spending on renewable energy and address social problems that have led 40 percent of Moroccan and Turkish immigrants to feel unwelcome.

"It's terrible when people are born in the Netherlands have the feeling they are not part of this society and it is not something to be proud of, but something to be ashamed of. And I want to change that.

A fresh face in politics

It seems a long way from the time a veteran journalist dismissively called him a "snotty kid" on national television two years ago. The slur turned Klaver into a household name, and soon he was his party's leader.

The insult, which made headlines around the country, was delivered in a TV show reporting on parliamentary hearings during which Klaver sharply questioned a Dutch banker about bonuses in the financial world.

"It was not only a clash of generations," Klaver recalled. "It was a clash of cultures."

While most Dutch politicians on the campaign trail hand out party flyers and talk to voters in shopping areas, Klaver has been holding "meetups," bounding into rooms with his sleeves rolled up, a necktie nowhere to be seen.

True to his Green mindset and his country's history, a key plank in Klaver's platform is building more windmills — specifically giant wind turbines in the North Sea — and closing all coal-fired power stations.

He also is a strong supporter of the European Union, ensuring multinationals don't avoid taxes and more sustainable agriculture practices in a country where intensive farming is still the norm.

"What we need is the most ambitious climate program ever," he said. "Climate change is happening right now and we have to stop it."

The message resonates in this low-lying country, parts of which hunker below sea level behind giant dikes.

Klaver brushed off comparisons with Canada's heartthrob prime minister, saying only that he wishes he were as buff as the 45-year-old Trudeau.

"I'm very jealous of Trudeau's muscles, because I'm not as muscled as he is," Klaver said with a smile.

It remains to be seen if he has the electoral strength of his Canadian colleague.

Some 12.9 million voters will head to the polls next Wednesday for a general election seen as a key litmus test of the rise of populist and far-right parties ahead of other national elections in Europe this year.

Some 28 parties are contesting next week's polls for the 150 seats in the Dutch lower house of parliament.