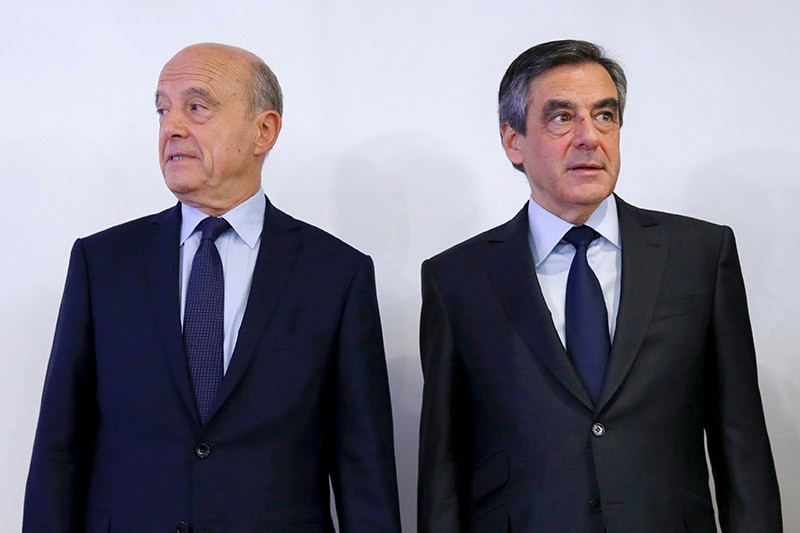 France's former prime minister Alain Juppé on Friday backed François Fillon's French presidential bid and became one of his sponsors, a bid to heal party divisions just days after he sharply criticised the conservative candidate in a speech.

Fillon already has over 1,000 sponsors, twice the number he needs under the rules, so Juppé's sponsorship is symbolic.

It could, nevertheless, help the scandal-hit candidate come from behind in opinion polls, because backers of the more centrist Juppé are being courted by the favourite, independent centrist Emmanuel Macron - who was due to be campaigning on Juppé's territory in Bordeaux later on Friday.

Fillon now has a fine campaign line to tread because victory also depends on attracting voters away from the other leading candidate, Marine Le Pen, the far-right National Front leader.

Only two candidates contest the second round on May 7. Opinion polls show Fillon coming third in the April 23 first round and Macron going on to become president.

"Even if just a passenger, I'm not leaving the ship during the storm," Juppé said on his Twitter account.

Juppé, who was defeated by Fillon in the centre-right primaries in November, had until this week been seen by many conservatives as a potential 'plan B' after the 63-year-old Fillon became embroiled in a scandal over his wife's pay.

On Monday, Juppé decided against taking Fillon's place, and a rebellion that was forming behind him fizzled out.

But in a speech renouncing the chance to run, the 71-year-old had harsh words for Fillon, saying he had wasted the strong lead The Republican party was enjoying before the scandal over his wife's pay broke, calling him obstinate, and expressing disquiet at his attacks on the judiciary investigating the case.

Fillon is due to report on March 15 to an investigating magistrate who plans to put him under formal investigation over whether his wife, Penelope Fillon, did real work for the hundreds of thousands of euros she was paid over a period of years.