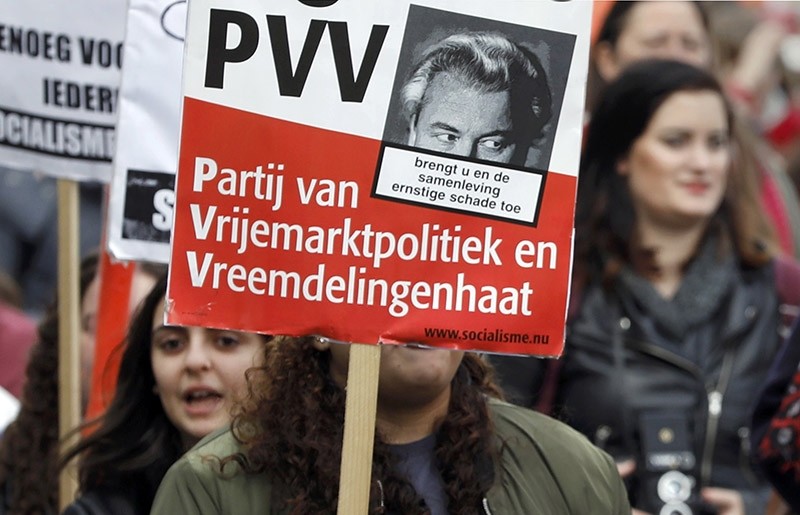 A demonstrator carries a sign reading ,PVV - The party of free market policy and xenophobia, , during a march in Amsterdam, Netherlands, March 11, 2017. (Reuters Photo)
by Daily Sabah with Agencies Mar 11, 2017 12:00 am

Ahead of March 15 election in the Netherlands, the rise of xenophobia, racism, anti-Muslim propaganda in the Western European countries, and particularly the Netherlands, has reached worrisome levels.

Geert Wilders and his far-right, anti-Islam, xenophobic Party for Freedom (PVV) had been riding high on a wave of populism and looked on course to win.

The latest weekly poll, released this week by the Dutch Polling Indicator, predicted that the PVV will win 25 seats, just one seat more than Prime Minister Mark Rutte's ruling People's Party for Freedom and Democracy (VVD).

Over the last months and years, the Netherlands has experienced a surge in racist, anti-Semitic, anti-Islam hate attacks which caused serious concerns among its population.

Critics pretend that, in a effort to counter rising far-right populism, the Dutch ruling party developed a rhetoric and policies which are reminiscent of the PVV.

Lastly, the government of Netherlands, which hosts several hundreds of thousands Turkish citizens, aligned with Wilders's anti-Turkish, anti-Muslim rhetoric, and went as far as barring the Turkish Foreign Minister Mevlüt Çavuşoğlu from meeting with the Turkish community in the country on Saturday.

Earlier this week, Çavuşoğlu said that the Dutch government officials were sending him ''secret messages'' that they had to cancel his meeting with the Turks living in the country to ''avoid making Wilders' PVV gain more propaganda ground before the elections.''

Turkish government officials, as well as analysts have been warning the Netherlands, along with its neighboring countries, over the rise of practices reminiscent of the Nazi, fascist era in Europe, while also reminding them on several occasions that racist, xenophobic, anti-Islam policies cannot be defeated by conceding compromises to hateful views, and adopting similar populist rhetoric and practices aiming to garner votes from the electorate likely to vote for political parties preaching extremist views.