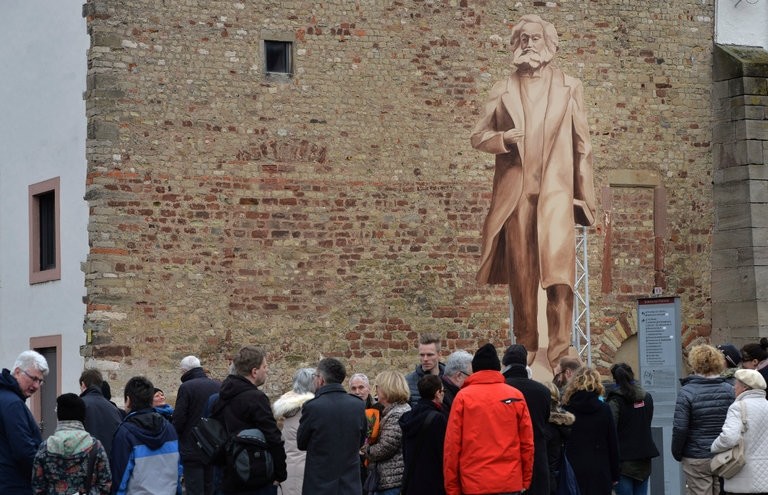 The city of Trier, Germany has decided to accept a statue of Karl Marx from China. This wooden representation shows Trier residents how the statue would look. (AP Photo)
by Daily Sabah with Agencies Mar 14, 2017 12:00 am

The City Council in Trier, a German city near the border with Luxembourg, has decided to accept a statue of Karl Marx from China to mark the bicentennial of the father of communism's birth.

After months of discussion, the council voted 42-7 with four abstentions Monday night to accept the gift, according to news agency dpa. The bronze statue's precise location and size are to be decided following further negotiations with China.

Initial plans by Chinese sculptor Wu Weishan called for the statue and its pedestal to be 6.3 meters (21 feet) tall, leading to criticism from some in the city.

Before the vote, the Mayor of Trier, Wolfram Leibe, told public broadcaster SWR, "Karl Marx is one of the most important citizens of this city, and we should not hide him."

Karl Marx was born in Trier on May 5, 1818. Throughout his work, the intellectual channeled the roots of German Hegelianism and the growing dissatisfaction with the archaic regimes of Europe.

Marx did not believe that capitalism could sustain itself and called for the workers of the world to unite in his 1848 "Communist Manifesto."

By the turn of the century Marxism had proliferated throughout Europe, advanced by those convinced of the injustice in the social order.

Statues and streets named after Marx were common in communist East Germany. Many survived the collapse of communism, unlike tributes to more contemporary socialists.