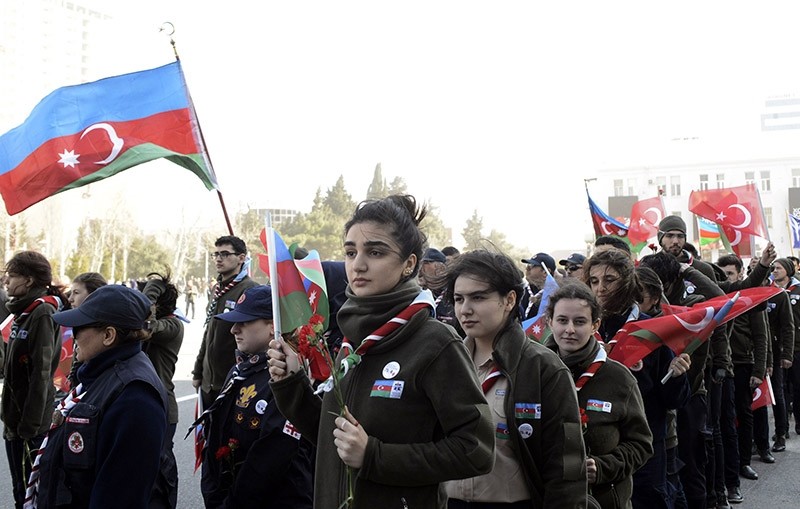 People attend a rally on Feb. 26, 2017 in Baku, capital of Azerbaijan, to mark the 25th anniversary of the Khojaly Massacre of Azerbaijanis by invading Armenian forces in Karabakh in 1992. (AFP Photo)
by Anadolu Agency Mar 14, 2017 12:00 am

Organization of Islamic Cooperation (OIC) Secretary-General Yousef al-Othaimeen has called for the "immediate" and "unconditional" withdrawal of Armenian forces from occupied Azerbaijani territories.

Al-Othaimeen made the assertion at a Monday ceremony in the Saudi city of Jeddah to mark the 25th anniversary of the 1992 Khojali massacre, in which hundreds of Azerbaijani civilians -- including children -- were killed by Armenian forces.

"The Khojali massacre was the result of Armenia's illegitimate occupation of Azerbaijan's territory," he said.

Al-Othaimeen called on OIC member-states to urge Armenia to end its occupation of Azerbaijani land and "abide by international law and respect Azerbaijan's territorial integrity".

The massacre, which took place on Feb. 25 and 26 of 1992, is regarded as one of the bloodiest episodes in the war between Armenia and Azerbaijan (1988-1994) for control of the latter's Upper Karabakh region, which remains occupied by Armenia to this day.

Following the Soviet Union's dissolution, Armenian forces took over the town of Khojali in Upper Karabakh after battering it with artillery and tank fire.

The two-hour offensive left 613 Azerbaijani dead, including 116 women and 63 children, and left almost 500 others critically injured, according to official Azerbaijani figures.

Roughly 150 of the 1,275 Azerbaijanis captured at the time by Armenian forces still remain missing.