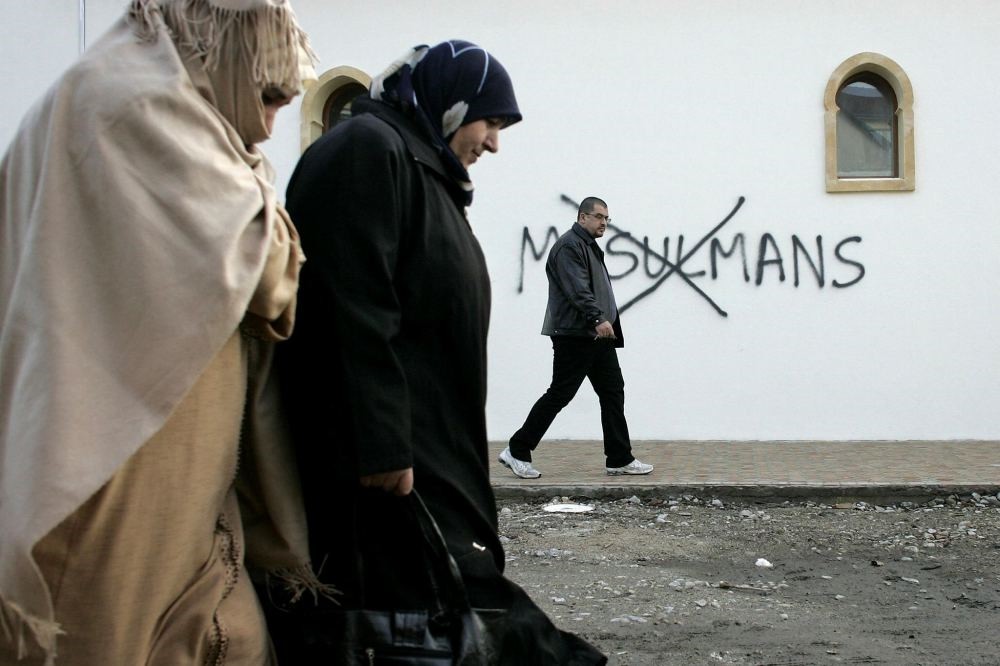 Muslim residents walk past racial slurs painted on the walls of a mosque in the town of Saint-Etienne, central France.
by Yusuf Selman İnanç Mar 15, 2017 12:00 am

A brief glance at the European media's fear-mongering track record renders the most recent Dutch hostilities targeting Turkish nationals, a Turkish minister and diplomats from the country as unsurprising

Tensions between Turkey and the EU reached new heights last weekend when the Dutch government denied landing permission to Turkish Foreign Minister Mevlüt Çavuşoğlu's plane and then barred the country's Family and Social Affairs Minister Fatma Betül Sayan Kaya from entering the Turkish consulate or delivering a speech to Dutch-Turks.

The developments come after Germany barred Turkish politicians from holding meetings in the country and tensions remain heightened with several European media outlets explicitly propagating the "No" campaign for Turkey's upcoming constitutional referendum.

While President Recep Tayyip Erdoğan and several Turkish ministers accused the EU of having an anti-Muslim stance, Turkey's opposition parties have also denounced the incidents as a defamation campaign against the country.

The EU denies allegations of rising Islamophobia indicating that millions of Muslims live in EU countries. While this subject of why Muslims had to immigrate to Europe over the course of time is another topic of discussion, the anti-Muslim stance of EU member states is nothing new, nor is it directly related to the emergence of Daesh and the Syrian Civil War which have caused the massive exodus of millions of refugees.

A brief glance at European news publications prior to the Syrian war reveals the fact that Europe considers the mere presence of Muslims as a threat in and of itself.

For instance an article published in the Economist in May 2003, titled, "Forget asylum-seekers: It's the people inside who count," is a piece that was written as a brief on European fears of not being able to integrate with Muslims, let alone deal with any newcomers fleeing Syria.

The article mentions the effects of 9/11 before immediately going into the rising anti-immigrant stance in the Netherlands and reads, "Many of their [the Netherlands'] immigrant neighbors did not [or so the Dutchman felt] share these Dutch values," going on to say, "The main noise has been about the asylum seekers and how to keep them out. But the real issue is the immigrants and their descendants who are already inside [the country]."

Later on, acknowledging the fact that Turks did indeed help recreate the entirely collapsed Germany after World War II, the article read, "First, they [immigrants] are communities, mostly distinct from the natives, [in terms of] language and religion and not just random collections of individuals. Second, these communities are not integrated into the society around them."

France has always been caught in the middle of anti-Muslim discussions due to the fact that it contains the largest Muslim population in the EU, while Muslims are the most disenfranchised ones.

In addition to France's dark colonial history, the country is accused of repeatedly attacking Islamic values under the pretext of preserving secularism, most recently seen with the burqa ban in Nice last year.

An article published in 2003 by Le Point mentioned an Ipsos poll, which indicated that 62 percent of the general French population believes that Islamic values are incompatible with those of France. In Germany, a similar poll, conducted in 2002, painted an eerily similar picture. Published in the working paper of Konrad Adenauer Stiftung, the poll revealed that 19 percent of Germans said they believe Muslims should be banned from practicing their religion while 43 percent indicated that Islamic views were incompatible with German values.

Timothy M. Savage, an official at the U.S. Department of State, published an article in the Washington Quarterly in 2004 titled, "Europe and Islam: Crescent Waxing, Cultures Clashing." In Savage's 50-page article, he described the problems of Europe regarding the Muslim societies, including the rise of Islamophobia.

"Over time, the political salience of the Muslim factor in Europe will be most evident in the domestic realm," he stated, while advising Europe of the need to figure out new ways to deal with the communities as secularization and assimilation policies do not work properly.

The situation in the EU is getting worse and Islamophobia is on the rise, especially after the Daesh attacks in France and Belgium. While the citizens of EU member states persistently deny the fact that Daesh is killing more Muslims than any other demographic and refuse to acknowledge that Daesh does not represent Islam in any way, recent polls also suggest that Europeans still have an anti-Muslim stance.

The results of a February-dated poll conducted by Chatham House, also known as the Royal Institute of International Affairs, revealed that 55 percent of Europeans think that all further migration from Muslim-majority nations should be stopped.

Finally, the Netherlands' hostile stance is appreciated only by native Europeans. According to a 2015 report on Islamophobia in Europe by the Foundation for Political, Economic and Social Research (SETA), Holland experienced some 279 religion-based discriminatory attacks that year, 206 of which targeted Muslims, marking a significant increase compared to 150 attacks in 2013.

According to the website Doamuslims.org which documents the number of Islamophobic attacks, 39 percent of all mosques in Holland have had experienced discriminatory aggression while 68 percent among that group suffered physical attacks, smashing of windows being the main style of attack.

While 81 percent of these attacks were reported to Dutch police, only 51 percent of the victimized institutions felt that they received enough help from law enforcement.

Radio Netherlands Worldwide also reported that there were some 117 attacks on mosques in Holland from 2005 to 2010 alone, more than any other country in Europe. It said that in 2011, only 290 discriminatory comments were detected on the internet however with the rise of social media that number has become uncountable.
RELATED TOPICS