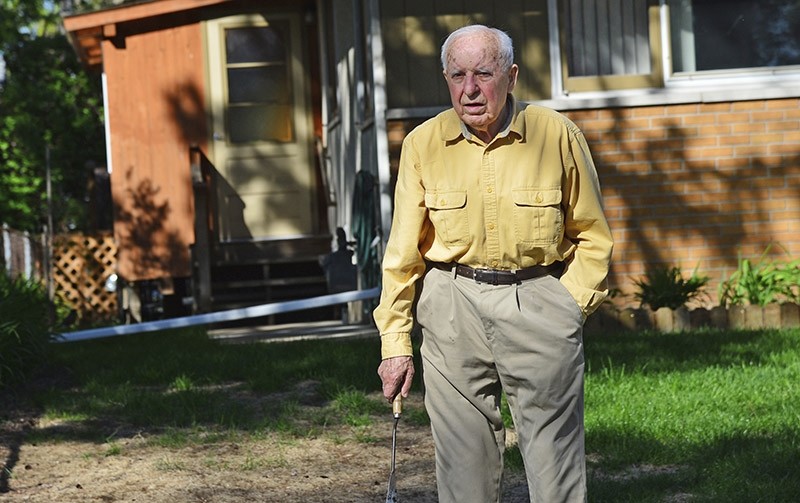 A court in Poland has issued an arrest warrant for a Minnesota man sought in a Nazi massacre, opening the way for Poland to seek his extradition from the United States on war crimes charges.

The Associated Press had previously identified the man as 98-year-old Michael Karkoc, an ex-commander in an SS-led unit that burned Polish villages and killed civilians in World War II.

Earlier this week, prosecutors from the state Institute of National Remembrance said evidence shows that American citizen Michael K. was a commander of a unit in the SS-led Ukrainian Self Defense Legion that raided eastern Poland's village of Chlaniow in July 1944, killing 44 people, including women and children.

They sought an arrest warrant for him from a court in eastern Poland, a step toward extradition. Poland's justice officials haven't released the suspect's last name, in line with Poland's privacy laws.

Judge Dariusz Abramowicz told the AP Wednesday the regional court in Lublin issued a warrant, based on 13 volumes of evidence, including documents from the U.S., Germany and Ukraine and from Poland's archives. He said that the evidence was strong enough for an arrest to be sought.

"In the court's assessment the evidence presented by the Institute of National Remembrance indicates a high probability that the suspect committed the crimes," Abramowicz said.

Prosecutor in Lublin, Jacek Nowakowski said on local TVP 3 station that among various pieces of evidence that helped identify the man were his signatures from Nazi times and his application for the U.S. visa.

A 92-year-old resident of Chlaniow, Honorata Banach, whose house was burned in the raid, told the AP that everyone was surprised at the news of the arrest warrant.

"People say: 'he's still alive!' But what can they do to him at his age, with death at his side?" she said over the phone. Her family fled the attack.

The decision comes four years after the AP published a story establishing that Michael Karkoc commanded the unit, based on wartime documents, testimony from other members of the unit and Karkoc's own Ukrainian-language memoir.

Karkoc must be present in court in Poland since the country does not recognize trial in absentia. If extradited, he would face a court in Lublin, in eastern Poland.

Abramowicz said there was no information to suggest that health conditions could hamper Karkoc from standing trial. Karkoc's family in Minneapolis says he suffers from Alzheimer's disease. The family denies Karkoc was involved in any war crimes.

Karkoc's son, Andriy Karkoc, reiterated Wednesday that his father is innocent of any war crimes, and called on the judge to release any evidence that may implicate his father.

Informed of the arrest warrant, he asked rhetorically: "Do they have any evidence on which to base that?"

"We call on the judge to release all evidence that he has that supports this unjust, inappropriate and immoral action," he told the AP.

Andriy Karkoc also pointed out that German prosecutors declined in 2015 to seek his father's extradition, concluding he was unfit to stand trial.

It wasn't immediately clear when Poland's Justice Ministry would write the extradition motion, which would then be handled by the U.S. Justice Department.

German prosecutors shelved their own war crimes investigation of Karkoc in 2015 after concluding that he wasn't fit for trial.

Karkoc's attorney refused to allow a medical expert from Germany, but instead provided medical documentation from doctors at the geriatric hospital in the U.S. where he was being treated.

Munich prosecutors called the assessment, which covered the span of a year and was evaluated by a German medical expert, "comprehensive."

The German probe began after the AP's story in June 2013, which also established that Karkoc had lied to American immigration officials to get into the U.S. a few years after World War II.

The evidence was assessed by Germany's special federal prosecutors' unit, which concluded there was enough for state prosecutors to pursue murder charges against Karkoc.
Last Update: Mar 15, 2017 11:39 pm