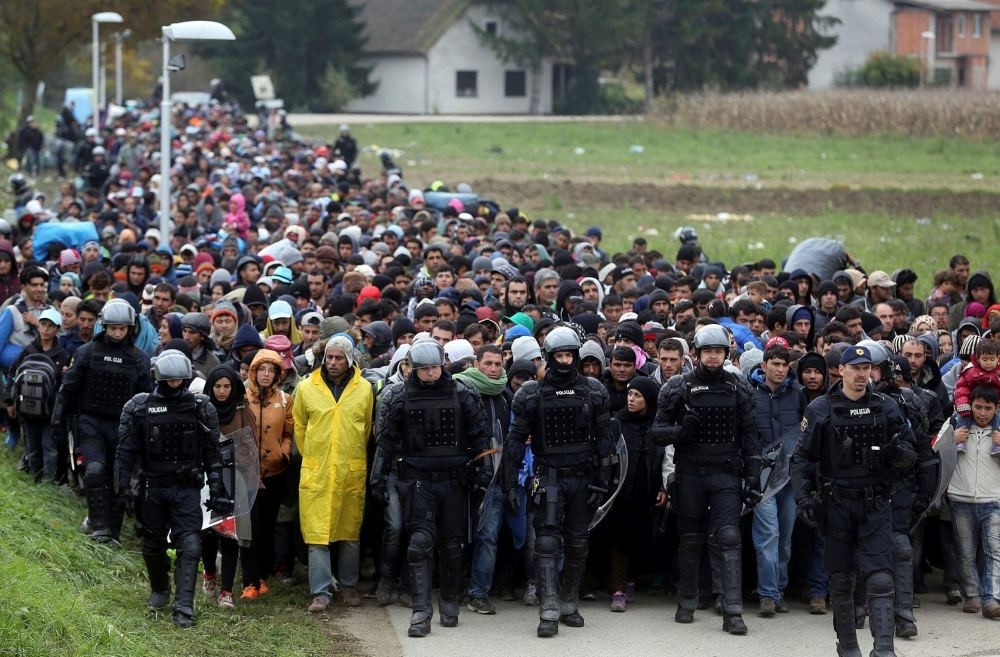 Slovenian police officers escort about 1,000 migrants from border crossing with Croatia.
by Compiled from Wire Services Mar 18, 2017 12:00 am

Fearing a new wave of immigration, Hungary blames the EU for the deteriorating EU-Turkey migration deal while Bulgaria talks about its backup plan to stop refugees

Hungarian Foreign Minister Peter Szijjarto said Thursday that the EU's "unreasonable and failed" policies are to blame for the deteriorating migration deal and that it was wrong to base Europe's long-term security exclusively on the agreement.

Szijjarto also blamed Brussels for failing to strengthen the defense of the EU's southern borders during the relatively calm period offered by the deal with Turkey.

Under Prime Minister Viktor Orban, Hungary has built fences on its southern borders with Serbia and Croatia to stop the flow of migrants.

Hungary's second line of fences on its border with Serbia will be built by the end of May and will be able to prevent any new wave of migrants coming from Turkey, Prime Minister Orban told state radio on Friday. Orban also said it was a mistake by the European Union to rely solely on Turkey to stop migration while at the same time criticizing Turkey.

"It is definitely not smart policy that we place our safety in the hands of [Turkey], and at the same time we keep pestering them, attacking them, criticizing them that they are not democratic enough [...] and generating conflicts with them," Orban said.

Concerns in Bulgaria have been increasing as many Balkan counties have been in fear of a new wave of migrants. Bulgaria is one of the main transit countries on the Balkan routes for refugees. "Bulgaria has a plan if the agreement between Turkey and the European Union is canceled," Bulgarian Defense Minister Stefan Yanev said Thursday, without elaborating. Yanev said there were "no indications" right now of increased pressure on the border.

EU member Bulgaria shares a 270-kilometer (165-mile) border with Turkey and relies on its neighbor to stem the migrant influx, as part of a mooted EU deal signed with Ankara last year.

The main feature of 2016 was the dramatic fall from about 1 million to around 363,000 migrant arrivals in Greece after an EU-Turkey accord in March that year, according to the International Organization for Migration.

However, President Recep Tayyip Erdoğan said on Thursday that Turkey may revoke the refugee deal with the EU. Turkey may cancel a migrant readmission agreement with the European Union, and is also re-evaluating a $6 billion refugee deal with the bloc, Foreign Minister Mevlüt Çavuşoğlu said in a televised interview late Wednesday. Çavuşoğlu's remarks come at a time when Turkey-EU tensions are running high after several European countries prevented Turkish politicians, including the foreign minister, from holding rallies. "We may cancel the readmission agreement. The EU has been wasting our time on the visa liberalization issue. We are not applying the readmission agreement at the moment, and we are evaluating the refugee deal," Çavuşoğlu said in an interview on Kanal 24.

The deal included a 6 billion euro aid package to help Turkey care for the millions of refugees hosted in the country. However, Turkey has so far received only 677 million euros.

In a joint statement in November 2015, the EU and Turkey confirmed their commitments to re-energize the accession process. However, "the issue of severing the agreement should be solved at the level of the president or the premier," Çelik said.