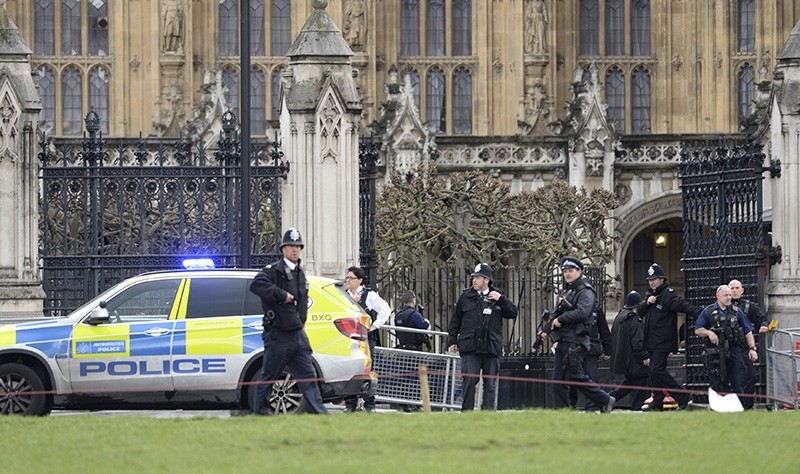 A knife-wielding man went on a deadly rampage in the heart of Britain's seat of power Wednesday, plowing a car into pedestrians on London's Westminster Bridge before stabbing a police officer to death inside the gates of Parliament. Four people were killed, including the assailant, and 40 others were injured in the London terror attack.

Lawmakers, lords, staff and visitors were locked down after the man was shot by police within the perimeter of Parliament, just yards (meters) from entrances to the building itself and in the shadow of the iconic Big Ben clock tower. He died, as did three pedestrians on the bridge, and the police officer.

A doctor who treated the wounded from the bridge said some had "catastrophic" injuries.

Metropolitan Police counterterrorism chief Mark Rowley said police believed there was only one attacker, "but it would be foolish to be overconfident early on."

The threat level for international terrorism in the UK was listed at severe. Wednesday was the anniversary of suicide bombings in the Brussels airport and subway that killed 32 people.

The incident in London unfolded within sight of some of the city's most famous tourist sites, including the London Eye, a large Ferris wheel with pods that have views over the capital. It stopped rotating and footage showed the pods full as viewers watched police and medical crews on the bridge, which has Big Ben at its north end.

Speaking outside 10 Downing St. after chairing a meeting of government's emergency committee, COBRA, May said that level would not change. She said attempts to defeat British values of democracy and freedom through terrorism would fail.

"Tomorrow morning, Parliament will meet as normal," she said. Londoners and visitors "will all move forward together, never giving in to terror and never allowing the voices of hate and evil to drive us apart."

Journalists at the Parliament building said they were told to stay in their offices.

The Press Association news agency reported that two people were seen lying within the grounds of Parliament.

A Reuters reporter inside the building said medical staff were treating two people inside the gates of the parliamentary estate.

Nearby Westminster underground train station was closed at the request of police.

London Ambulance Service Deputy Director of Operations Pauline Cranmer said her service had sent "a number of resources to the scene including ambulance crews, London's air ambulance and our hazardous area response team."

Sky News reported that the attacker at parliament, apparently armed with a knife, forced his way through security gates and assaulted a police officer.

The BBC and other media said police shot and seriously injured the attacker.

David Lammy, a London lawmaker, said on Twitter that he was locked in the Commons chamber at parliament, "but my heart goes out to the police officers, those hit by the car on the bridge and their families."