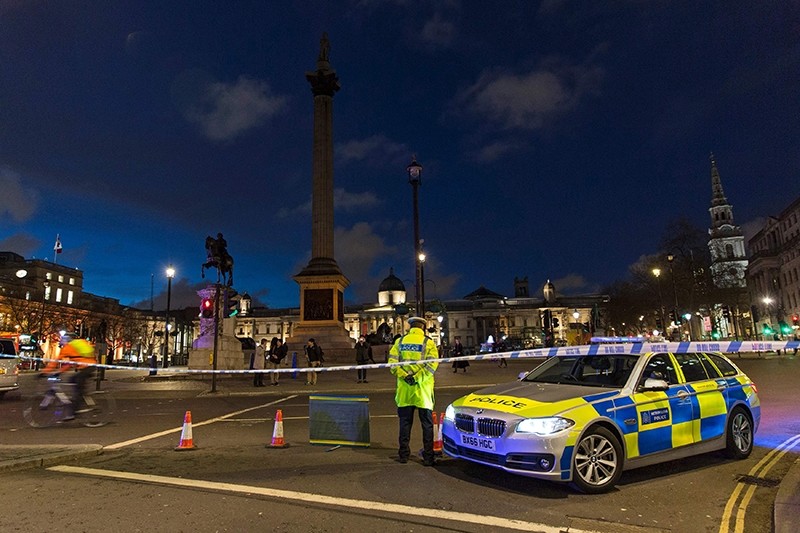 A British police officers stands on duty at a cordonned off road, leading towards Parliament Square, in central London on March 22, 2017 (AFP Photo)
by Compiled from Wire Services
Mar 23, 2017 12:00 am

British police arrested seven suspects in a raid on a house in Birmimgham as part of an investigation into London terror attack, Sky News television channel quoted unidentified sources as saying on Thursday.

The police say they have searched six addresses and made seven arrests in attack investigation.

Britain's most senior counter-terrorism officer Mark Rowley said police had searched addresses in London, Birmingham and other parts of the country in their investigation.

"It is still our belief ... that this attacker acted alone and was inspired by international terrorism. At this stage we have no specific information about further threats to the public," Rowley said.

He said there was a mix of nationalities among the dead but gave no details. The victims were a policeman who was stabbed and two members of the public, a woman in her mid-40s and a man in his mid-50s.

The fourth dead was the assailant.

Meanwhile, British Prime Minister Theresa May also confirmed that police knewthe identity of the British-born man who went on a car and gun rampage at Parliament.

May added that he was once investigated for terrorist links but was considered a peripheral figure. She didn't disclose his name.

May also said that there was no reason to believe "imminent further attacks" were planned.

The raid was linked to the assailant in Wednesday's attacks, the Press Association news agency and Sky News reported.

Five people were killed and about 40 injured on Wednesday when a car ploughed into pedestrians and a suspected Daesh-inspired attacker stabbed a policeman close to Britain's parliament.