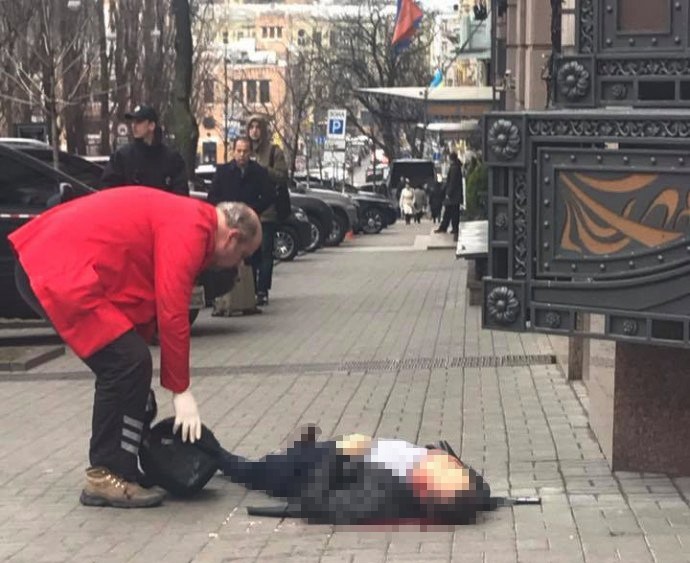 The body of Denis Voronenkov, a former lawmaker of the Russian State Duma, is seen in central Kiev, Ukraine March 23, 2017 (Reuters Photo)
by Compiled from Wire Services Mar 23, 2017 12:00 am

Ukrainian police said Voronenkov was shot dead Thursday by an unidentified gunman at the entrance of an upscale hotel in the Ukrainian capital.

Voronenkov, 45, a former member of the communist faction in the lower house of Russian parliament, had moved to Ukraine last fall and had been granted Ukrainian citizenship.

Voronenkov left Russia with his wife, singer Maria Maksakova, who was also a lawmaker. He said he had to leave Russia because of persecution by Russian security agencies and had renounced Russian citizenship.

He has also spoken out against Russia's annexation of Crimea in March 2014, although he voted for the move at the time.

"A cynical murder of one of the witnesses involved in the state's case against ex-president Yanukovich," said Ukraine's General Prosecutor Yuriy Lutsenko.

"In broad daylight in the centre of Kiev, former Russian lawmaker Denis Voronenkov was shot. He had provided investigators of the military prosecutor's office with highly important (witness) testimony for the case. This was a typical show execution of a witness by the Kremlin."

Voronenkov had been placed on a Russian federal wanted list in connection with an alleged $5 million property fraud.