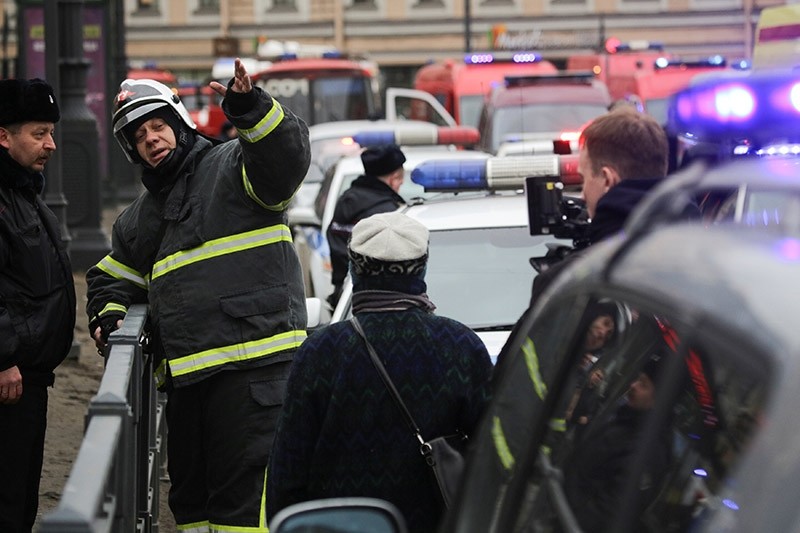 Twin explosions hit the subway in Russia's second largest city St. Petersburg on Monday, with at least 10 people reportedly killed, 50 others injured in the incident.

"According to the first preliminary data, around ten people were killed," an emergency source told Russian news agencies after the Saint Petersburg metro said that an unidentified object had blown up in a train carriage.

Initial footage circulated from the blast scene showed blown-up doors of a metro train in a station.

A homemade bomb containing shrapnel is believed to have caused a deadly explosion on an underground train in the Russian city of St Petersburg, state news agency RIA Novosti reported.

Another unexploded device has been found on the Saint Petersburg metro system, several Russian agencies reported.

"A bomb that failed to go off was found at Vosstanaya Square metro station," Interfax said citing an anonymous source, whereas police did not confirmed the report. The station is a busy hub of the underground network in the center of Russia's large metropolitan area.

The Saint Petersburg metro has shut down all stations due to the deadly train explosion.

Kremlin spokesman Dmitry Peskov told reporters that President Vladimir Putin has been told of the explosion.

"Yes, the president was informed about this," Peskov said, according to TASS.

Meanwhile, Russian President Vladimir Putin, who was visiting the city for a meeting with Belarussian leader Alexander Lukashenko, said that Russia is considering all causes, including terrorism regarding the attack. He offered his condolences to the families of those killed.

Russia's National Anti-Terrorist Committee said an unidentified explosive device went off on a train that was traveling between two stations. Maxim Liksutov, Moscow's deputy mayor, told Interfax that Moscow authorities were tightening security on the subway in the Russian capital.

The agency that runs the subway said several stations in the northern Russian city were closed and that an evacuation was underway.

Social media users posted photographs and video from a subway station in the city center, showing people lying on the floor outside a train with a mangled door. Frantic commuters reached into doors and windows, trying to see if anyone was there and shouting "Call an ambulance!" The explosion happened between Sennaya Ploshchad and Tekhnologichesky Institut stations.

Russia's National Anti-Terrorism Committee said that security will be tightened at all critical transport facilities after the deadly blast.

Russia's security services have previously said they had foiled "terrorist attacks" on Moscow's public transport system by militants, some of whom were trained by Daesh in Syria.

The Federal Security Service has arrested suspected terrorists from countries in central Asia, in cooperation with former Soviet republics of Kyrgyzstan and Tajikistan.

In November 2016, a series of gun and bomb attacks in Russia's two biggest cities was foiled as 10 suspected terrorists were arrested.

Russia's public transportation systems have been targeted by attacks in the past. In 2013, Russia was hit by twin suicide strikes that claimed 34 lives and raised alarm over security at the Sochi Winter Olympic Games.

A bombing at the main railway station of the southern city of Volgograd killed 18 people on while a second strike hit a trolleybus and claimed 16 lives.

A suicide raid on Moscow's Domodedovo airport that was claimed by militants from the North Caucasus killed 37 people in January 2011. That strike was claimed by the Caucasus Emirate movement of warlord Doku Umarov.

Russia had beefed up its security over the holiday period in the wake of the attack on the Berlin Christmas market that killed 12.

The country has been the target of attacks by Chechen militants in past years. Daesh, which has drawn recruits from the ranks of Chechen rebels, has also threatened attacks across Russia in retaliation for Russian military intervention in Syria.

According to Russian intelligence services, most of Russian militants are from former-Soviet countries like Uzbekistan, Tajikistan and Kyrgyzstan.

Moscow launched its bombing campaign in Syria in September 2015, helping to turn the tide in favor of Assad's ailing forces.

Putin had announced a partial withdrawal of Russian forces in March 2016, but Moscow later ramped up its presence again as fighting increased.

As well as operating a naval facility in Tartus, Russia runs an air base outside the Syrian coastal city of Latakia, which currently houses warplanes used in its bombing campaign in support of ally Assad.

The parallel series of talks in Astana, Kazakhstan, aim to bolster the truce to support the U.N. negotiations.

Damascus has been the scene of heavy fighting in recent days, with the moderate Syrian opposition making large incursions into east of the Syrian capital, while the Bashar Assad regime has responded with airstrikes on opposition positions.

The last round of Astana talks began on Feb. 23 and ended on March 4 without any clear result. The next meetings in Astana are to be held on May 3-4.