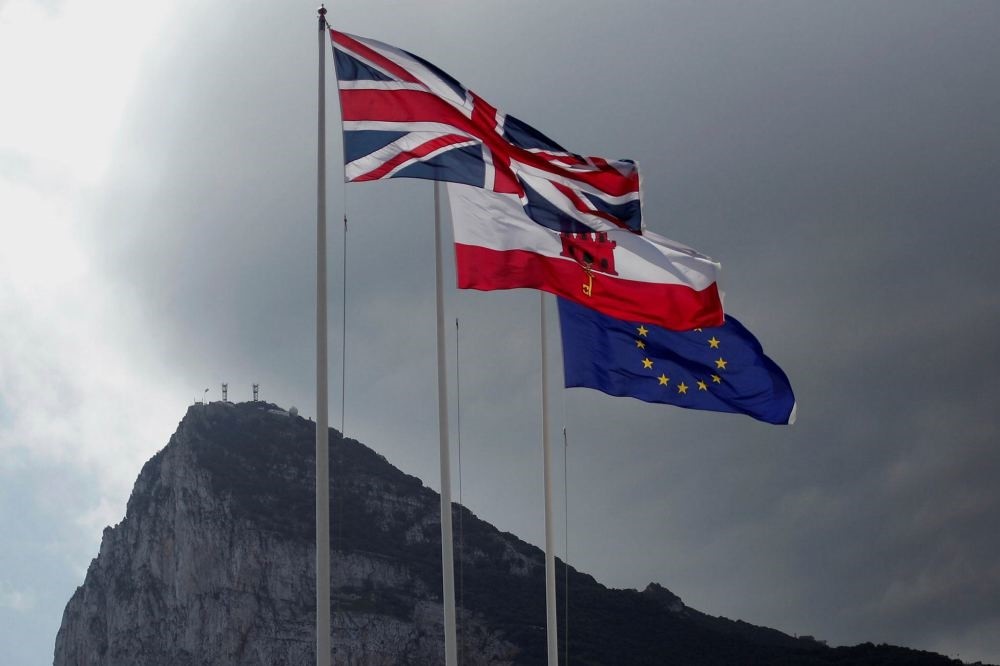 The United Kingdom flag, the Gibraltarian flag and the European Union flag are seen flying at the border of Gibraltar with Spain.
by Daily Sabah with Wires Apr 05, 2017 12:00 am

Three out of four Spaniards would not support a military response to the U.K. over Gibraltar, according to a recent poll on the heels of a statement from a conservative British politician who says Britain would be prepared to defend Gibraltar militarily

Less than a week after asking for a divorce from the EU, the U.K. is talking war with Spain. However, a recent poll conducted by Spanish El Huffington Post suggests that the majority of Spaniards would not support military intervention over Gibraltar, British newspaper The Sun reported yesterday. The newspaper asked pollsters, 'Would you sign up to fight for Gibraltar?' in a survey to which 76 percent of respondents said, "No, they should leave me in peace."

The latest spat was sparked by a draft of Brexit negotiation guidelines drawn up by the EU, which said no future agreement between the U.K. and the bloc would apply to Gibraltar unless both the U.K. and Spain agreed. Officials in Gibraltar accused Spain of using Brexit to force negotiations on the status of the territory, against the wishes of the 32,000 Gibraltarians who overwhelmingly want to remain British.

The tension increased after the former Conservative Party leader Michael Howard said Prime Minister Theresa May would defend Gibraltar in the same way that former Prime Minister Margaret Thatcher did the Falkland Islands.

Howard told the BBC on Sunday that in 1982, "Another female prime minister sent a task force halfway across the world to protect another small group of British people against another Spanish-speaking country. And I'm absolutely clear that our current female prime minister will show the same resolve in regards to Gibraltar, as her predecessor did."

Howard spoke on the 35th anniversary of Argentina's invasion of the Falklands, a South Atlantic archipelago that has been a British territory since 1833. Britain retook the islands, known as the Malvinas to the Argentines, in a brief war that killed 649 Argentine troops, 255 British soldiers and three islanders.

Howard's comments raised eyebrows in Madrid with Spanish Foreign Minister Alfonso Dastis saying,"The Spanish government is a little surprised, actually, by the tone that has been generated in the U.K., a country traditionally known for its composure." He told journalists that regarding the question of Europe and the issue of Gibraltar, "Britain's traditional calmness is conspicuous by its absence."

The rocky, 2.6 square mile (6.7 square kilometer) enclave at the tip of the Iberian peninsula has been a British territory -- and the source of friction between the U.K. and Spain -- since 1713.

The draft of Brexit negotiation guidelines drawn up by the EU stipulate that no future agreement between the U.K. and the bloc would apply to Gibraltar unless both countries agreed. The clause means that Spain, which will still be a member of the EU when the U.K. leaves, could potentially block Gibraltar's access to a trade accord negotiated between the bloc and London.

Madrid argues that Gibraltar must not be included in Brexit negotiations, as it is not fully recognized by the international community as an integral part of the U.K. The U.N. defines it as "non-self-governing territory," a special status that means it is under the administration of the British though not formally a part of the U.K.

Seizing the opportunity soon after the U.K. voted to leave the EU in June of last year, Madrid proposed to share sovereignty over Gibraltar with London, which it argued would allow the Rock to remain in the 27-member bloc. However, Gibraltarians had already rejected such a proposal in a 2002 referendum, and they want to stick with the Union Jack despite voting by 96 percent to remain in the EU.
Last Update: Apr 05, 2017 1:03 am
RELATED TOPICS