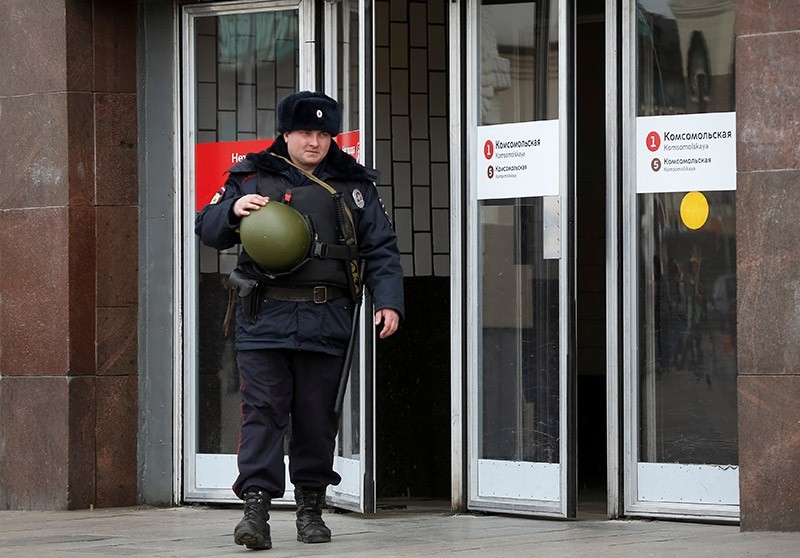 A police officer walks in front of a metro station following the St. Petersburg metro blast that took place on April 3 (Reuters Photo)
by Compiled from Wire Services Apr 06, 2017 12:00 am

Russian authorities have made safe an explosive device found in a residential building in St Petersburg, the TASS news agency reported on Thursday, while a loud explosion took place later on in the day.

A law enforcement source told Reuters that fire engines had turned up at the building in question and that people living in flats on two stairwells had been evacuated.

Russia's Federal Security Service (FSB) said, according to Russian news agencies, that the object found early Thursday in an apartment building on St. Petersburg's eastern outskirts could contain explosives. Residents have been evacuated and explosives experts have started working on the site.

Security sources said later on Thursday that the explosives found in the building were similar to Monday's unexploded bomb found on the St. Petersburg Metro system.

Police in the city are on high alert following Monday's explosion that killed the attacker and 13 other people and wounded some 55.

A loud explosion was heard on Thursday in a residential building close to the site in St Petersburg where explosives were found earlier in the day, Reuters witnesses said.

No one was hurt in the explosion but a vehicle was damaged by falling masonry, news agency RIA said, citing a source in Russia's emergencies ministry.

Police on Wednesday arrested eight Central Asian migrants suspected of acting as recruiters for Daesh terrorist group and al-Qaida's Syria branch. The investigators found no immediate evidence of their involvement in the subway attack.