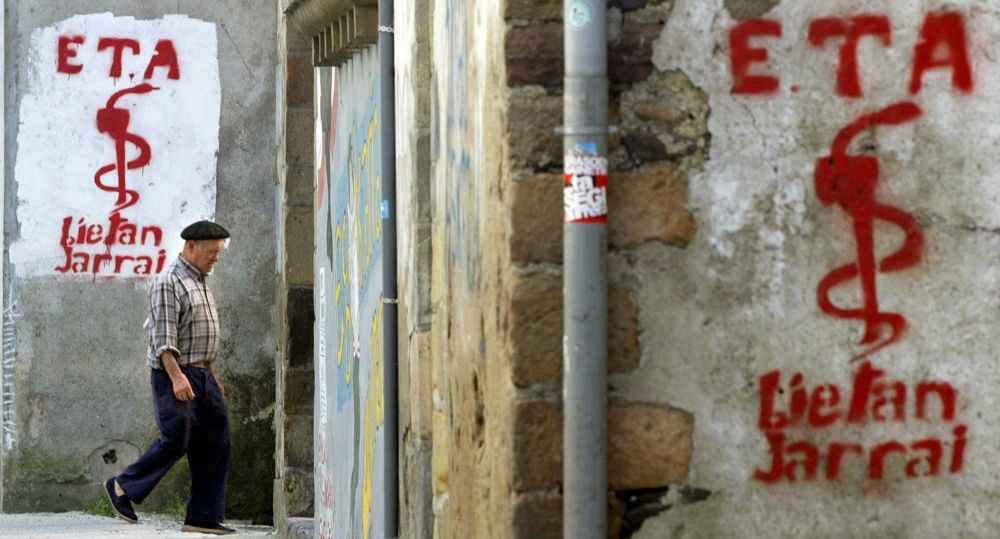 An old man walks past graffiti depicting the logo of Basque separatist group ETA in Goizueta, Spain. (Reuters Photo)
by Compiled from Wire Services Apr 08, 2017 12:00 am

The armed Basque separatist group ETA, inactive for more than five years, is to hand over its arms, a finishing touch to a 43-year violent campaign that claimed 829 lives, mostly in Spain

Basque militant separatist group ETA, which waged a bloody campaign for independence from Spain for over half a century, said early on Friday it had given up all its arms and explosives.

Politicians from a broad spectrum of parties, including pro-independence and national ones, gathered in the port city of Bilbao on the Basque coast to urge action on ETA's pledge to hand over all its weapons.

"We call on ETA to complete as soon as possible a single act of unilateral, complete, definitive and verified disarmament," Basque Socialist Party representative Rafaela Romero told a news conference.

News that the disarmament takes place in Bayonne, France, first came when pro-Basque independence environmental group Bizi told Le Monde newspaper it had been given responsibility for the handover.

Romero said the process should not be conditioned by politics but asked for support from the Spanish and French governments, an international monitoring group, public institutions and civil society.

The Basque parliament is due to vote on Thursday on the proposals.

"We want to give credibility to the announcement, expressed under those conditions. We hope it is successfully completed," Romero said. Disarmament is the second-to-last step demanded by France and Spain, which want ETA to formally disband. The organization hasn't said if it will do that.

While disarmament is a crucial step to ending the Basque conflict, it remains to be seen whether the gradual fade-out on one of the Europe's last standing violent nationalist conflicts can help heal the decades-old social divisions it caused in Spain and its northern Basque region.

ETA's name is a Basque-language acronym for Euskadi Ta Askatasuna, meaning Basque Homeland and Freedom. It emerged in the late 1950s during the dictatorship of Gen. Francisco Franco, which repressed Basque and other cultures in Spain.

The group's stated aim was to form an independent state from Basque areas on both sides of the Pyrenees. Basques have a distinct culture and an ancient language, Euskara.

ETA's first victim was a Civil Guard police officer killed in 1968. The second was a police commissioner. ETA later began to target politicians, civil servants and journalists, as well as business representatives who refused to pay the "revolutionary tax" demanded to finance the group. In 1973, ETA killed Franco's designated successor, Adm. Luis Carrero Blanco, by bombing his car in central Madrid.

Democracy formally returned to Spain in 1978, three years after Franco's death, but ETA's campaign intensified. One of its most notorious attacks killed 21 people in a supermarket bombing in Barcelona in 1987.

Shadowy death squads, meanwhile, killed more than 60 people in what was known as the Spanish government's "dirty war" against the group.

While ETA may have enjoyed some support during the Franco dictatorship, social rejection increased over the years and then erupted massively in 1997 following the kidnapping and brutal slaying of Miguel Angel Blanco, a 29-year-old small town-councilor.

ETA carried out most of its attacks in Spain while using southwestern France as a hiding place for its members and arms stashes. Increased cooperation by French authorities in the 1990s helped Spain's police and judiciary go all out against ETA and its supporters, leading to the closure of newspapers close to the militants and the banning of political and social groups seen as speaking for ETA.

Over the years there were cease-fires and some fruitless negotiations with the Spanish government, only for the bombings and shootings to resume.
RELATED TOPICS