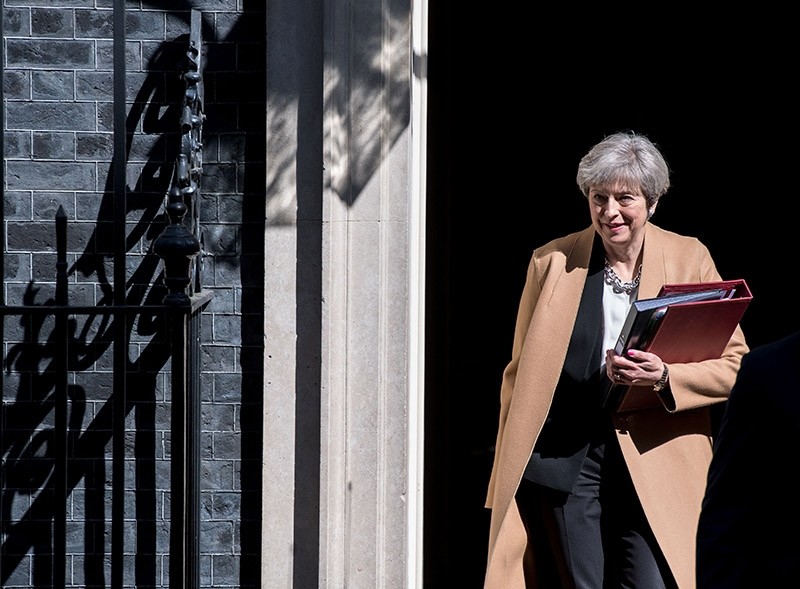 British Prime Minister Theresa May leaves 10 Downing Street in central London on April 19, 2017 ahead of the weekly Prime Minister's Questions session in the House of Commons. (AFP Photo)
by Associated Press Apr 19, 2017 12:00 am

British lawmakers voted by a resounding 522 to 13 on Wednesday to back Prime Minister Theresa May's call for a snap election on June 8.

The result easily surpassed the two-thirds majority of the 650 lawmakers needed to trigger an early vote. There were also a number of abstentions.

May says holding an election in June, rather than as scheduled in 2020, will give the country "certainty and stability" as it negotiates its departure from the European Union.

May is hoping to gain a bigger majority in Parliament for her Conservatives, strengthening her negotiating hand with the EU.

The opposition Labour Party and Liberal Democrats welcomed the chance to put their policies to voters, though the Scottish National Party called the election a cynical political ploy.

May dismissed criticism of her move to send voters back to polling booths for the third time in two years, after a May 2015 national election and a June 2016 referendum on EU membership,

She said that "Brexit isn't just about the letter that says we want to leave. It's about ... getting the right deal from Europe."

Britain's next national election had not been due until for 2020, a year after the scheduled completion of two years of EU exit talks.

May told The Sun newspaper that if Britain were still negotiating with the bloc in the run-up to a national election, "the Europeans might have seen that as a time of weakness when they could push us."

The early ballot will give the prime minister — or her replacement — more time to implement Brexit before another election.

EU officials say Britain's surprise election will not interrupt the bloc's preparations for Brexit talks — though they will slightly delay the start of negotiations. Leaders of EU states are due to adopt negotiating guidelines at an April 29 summit, and the bloc will prepare detailed plans for the talks with Britain by late May.

It had been hoped talks could start by the end of that month, but EU Commission spokesman Margaritis Schinas said Wednesday that "the real political negotiations" with Britain would not start till after the June 8 election.

May's Conservatives currently hold 330 of the 650 seats in the House of Commons. Opinion polls give them a big lead over the Labour opposition, and May is gambling that an election will deliver her a personal mandate from voters and produce a bigger Conservative majority in Parliament.

Now that lawmakers have approved the election, Parliament will be dissolved on May 2.

Unofficial electioneering kicked off in the weekly Prime Minister's Questions session in the House of Commons, as May traded barbs with Labour leader Jeremy Corbyn.

Against a backdrop of raucous cheers and jeers, May called Corbyn "not fit to lead" and said his left-wing economic policies "would bankrupt this country."

Corbyn said years of Conservative austerity had led to falling living standards and called May "a prime minister who can't be trusted."

May ruled out participating in televised debates with other leaders. TV debates don't have a long history in British politics, but were a feature of the last two elections, in 2010 and 2015.

"We won't be doing television debates," May said, adding that politicians should spend election campaigns "out and about" meeting voters.

"The prime minister's attempt to dodge scrutiny shows how she holds the public in contempt," he said.