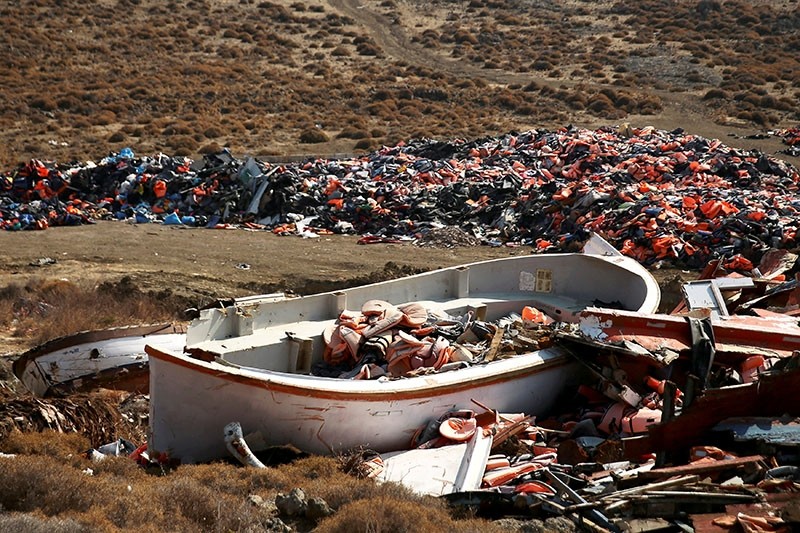 Lifejackets are seen inside a wrecked boat used by refugees and migrants to cross part of the Aegean Sea from Turkey to Greece at a garbage dump site of thousands of lifejackets, on the island of Lesbos, Greece, October 5, 2016. (Reuters Photo)
by Daily Sabah with AA Apr 24, 2017 12:00 am

Tragedy has once again struck a group of migrants hoping for a better life in Europe after a boat carrying them sank off the Greek island of Lesbos, killing 15 people, including children.

The deaths come at a time when stricter measures are being taken to stop the flow of refugees and on the heels of criticism raised by Pope Francis regarding the quality of asylum centers located on the very island the imperiled migrants were trying to reach.

According to the Greek Ministry of Shipping and Island Policy, a boat carrying migrants and refugees left Turkey late Sunday night, but appeared to have sunk after entering Greek waters.

Frontex, the EU's border security agency, and Greek authorities have recovered eight bodies so far, including that of a child, while two women, one of them pregnant, have been rescued and transported to the island.

The Turkish coast guard has recovered the bodies of seven more people. The nationalities of the migrants were not confirmed as Daily Sabah went to print but they are most likely Syrians from Turkey, which hosts about 3 million people who have fled the ongoing civil war in Syria.

One of the rescued women told Greek authorities that about 25 people had been on board, Ministry sources told the Anadolu Agency. That brings the number of those still missing to more than 10.

A search-and-rescue operation is ongoing with the local coast guard, private and Greek navy craft, as well as Frontex boats and helicopters.

Up until the last year, hundreds of thousands of migrants had attempted and managed to cross into Greece from Turkey's Aegean shores.

An agreement between the EU and Turkey signed last year had established stipulations that those arriving in Greece would be sent back to Turkey while those in Turkey would be resettled in Europe, helping to reduce the number of illegal immigrants attempting to flee by sea.

More importantly, the agreement helped reduce the deaths of migrants who undertake the short but dangerous journey on dinghies.

Though the deal has been hailed as a success in curbing the migrant flow, the EU still faces criticism for not taking in more migrants at a time of worsening conflicts around the world; especially in Syria, rendering millions of people displaced with no better place to go.

Even if migrants manage to settle in European countries, they face the threat of rising far-right rhetoric and occasional attacks targeting migrants.

Pope Francis on Saturday urged the international community to get immigrants and refugees out of holding centers, referring to those centers as "concentration camps."

Recalling a trip to a camp to the Lesbos in 2016, the pontiff told the story of a Muslim refugee he met at the camp who told him about the killing of his Christian wife by terrorists.

"I don't know if he managed to leave that concentration camp because refugee camps, many of them, are of concentration [type] because of the great number of people left there," the pope said.

He also praised countries that help refugees, referring to the EU-Turkey deal for helping migrants.

Meanwhile, a group of Syrian refugees stranded on the Greek island launched a hunger strike to protest the lengthy asylum process.

Sitting outside an asylum application office, 14 migrants refused to eat anything in protest of the appeal process that sometimes take months, the German news agency DPA reported. The DPA says some 13,800 refugees are waiting for their status to be resolved under miserable conditions in camps on the island.