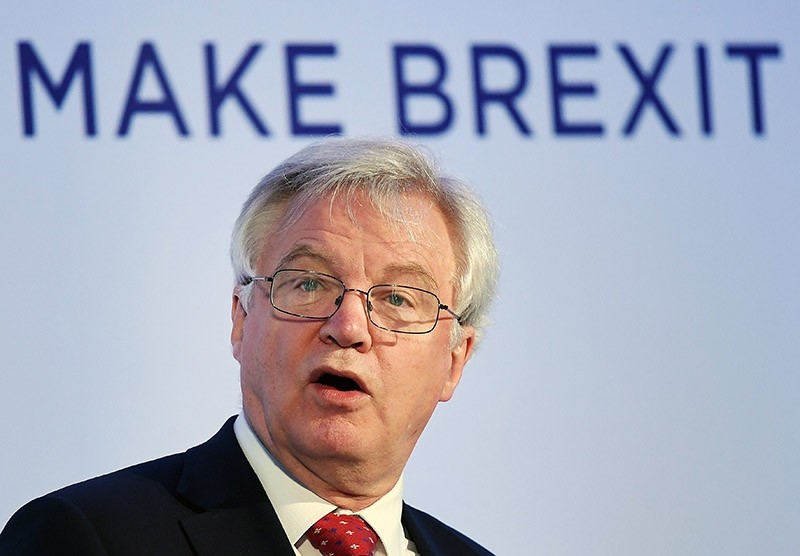 British Secretary of State for Exiting the European Union (in charge of Brexit negotiations) David Davis delivers a speech at the Prosperity UK conference in London, Britain, 26 April 2017 (EPA Photo)
by Daily Sabah with Agencies May 03, 2017 12:00 am

British Secretary of State for Exiting the European Union David Davis stated Wednesday during a TV talk that his country will not pay a £84.6 billion (or 100 billion euros)"divorce bill" for leaving the bloc, specifying that the U.K. would only pay what was legally due.

Davis, appearing on ITV's breakfast program "Good Morning Britain," underlined that his country was not a supplicant and that it takes its EU rights and obligations seriously: "This is a negotiation. They lay down what they want and we lay down what we want," he said according to press reports. In his views, the EU so far is playing "rough and tough."

His remarks came after an article published by the Financial Times reported that EU claims regarding outstanding financial settlements had risen to as much as 100 billion euros, and that EU negotiators were trying to maximize the U.K.'s liabilities due to Brexit. Part of the changes made to calculations is based on the inclusion of post-Brexit farm payments and EU administration fees for 2019 and 2020, the Financial Times wrote.

The U.K. wants to exit the EU by March 2019, and preliminary talks as to the exact modality of the withdrawal are to be held soon. Prime Minister Theresa May had signed a letter March 29 addressing European Council President Donald Tusk, officially announcing the start of the Brexit process. Formal talks on Britain's withdrawal from the EU will start only after general elections in the U.K. which are scheduled for June 8.

Previous calculations regarding financial demands from the side of the EU had ranged at 50 to 60 billion euros, while the exact method of determining the sum allegedly owed by Britain has not yet been determined. The EU commission wants to enter negotiations without a fixed sum, statements of EU authorities from Brussels said Wednesday.

Davis can be considered a moderate compared to the tenor of political discussions taking place inside the U.K. Conservative MPs have argued that the U.K. does not owe anything to the EU and that Brexit could take place without the conclusion of any financial deal. Even Prime Minister Theresa May warned that she would prefer an exit without any agreement on future ties rather than a "bad deal."

Speaking to Radio 4's Today show later on, Davis specified that the U.K. could indeed just walk away without owing the EU anything, but that was not his preferred outcome: "We want a deal. We think we can get a deal that is beneficial to everybody" he reportedly said.