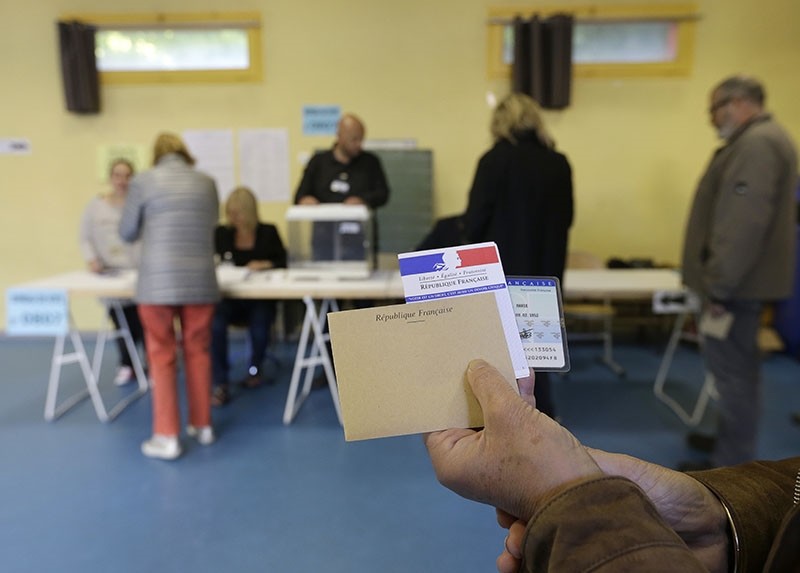 A man shows his voter registration papers prior to casting his ballot in the presidential runoff election between Emmanuel Macron and Marine Le Pen, in Marseille. (AP Photo)
by May 07, 2017 12:00 am
French voters went to the polls Sunday to pick a new president, choosing between young centrist Emmanuel Macron and far-right leader Marine Le Pen in a watershed election for the country and Europe.

Polling day follows an unprecedented campaign marked by scandal, repeated surprises and a last-minute hacking attack on Macron, a 39-year-old who has never held elected office.

Le Pen, 48, has portrayed the ballot as a contest between the "globalists" represented by her rival -- those in favour of open trade, immigration and shared sovereignty -- versus the "nationalists" who defend strong borders and national identities.

Voting began at 0600 GMT in 66,546 polling stations. Most will close at 1700 GMT, except those in big cities which will stay open an hour longer.

A first estimate of the results will be published around 1800 GMT.

"The political choice the French people are going to make is clear," Le Pen said in her opening remarks during an often vicious debate between the pair on Wednesday night.

The last polling showed Macron -- winner of last month's election first round -- with a widening lead of around 62 percent to 38 percent before the hacking revelations on Friday evening. A campaigning blackout entered into force shortly after.

Hundreds of thousands of emails and documents stolen from the Macron campaign were dumped online and then spread by anti-secrecy group WikiLeaks, leading the candidate to call it an attempt at "democratic destabilisation."

France's election authority said publishing the documents could be a criminal offence, a warning heeded by traditional media organisations but flouted by Macron's opponents and far-right activists online.

"We knew that there were these risks during the presidential campaign because it happened elsewhere. Nothing will go without a response," French President Francois Hollande told AFP on Saturday.

There has been no claim of responsibility for the French hack, but the government and Macron's team previously accused the Kremlin of trying to meddle in the election -- accusations denied in Moscow.

Whoever wins Sunday's vote it is set to cause profound change for France, the world's sixth-biggest economy, a permanent member of the UN security council and a global military power.

It is the first time neither of the country's traditional parties has a candidate in the final round of the presidential election under the modern French republic, founded in 1958.

Macron would be France's youngest-ever leader and was a virtual unknown three years ago when he was named economy minister, the launchpad for his sensational presidential bid.

He left Hollande's Socialist government in August and formed En Marche (On the Move), a political movement he says is neither of the left nor the right and which has attracted 250,000 members.

"France is not a closed country. We are in Europe and in the world," Macron said during Wednesday's debate.

But Le Pen is hoping to spring a shock that would resonate as widely as Britain's decision to withdraw from the EU or the unexpected triumph of US President Donald Trump.

National Front leader Le Pen sees herself as part of the same backlash against globalisation that has emerged as a powerful theme in the US and in recent ballots in Britain, Austria and the Netherlands.

She has pledged to organise a referendum on withdrawing France from the EU and wants to scrap the euro, which she has dubbed a "currency of bankers."

She has also vowed to reduce net immigration to 10,000 people a year, crack down on outsourcing by multinationals, lower the retirement age and introduce hardline measures to tackle terrorism.

Many voters still see her party as anti-Semitic and racist despite her six-year drive to improve its image.

Macron topped the first round of the presidential election on April 23 with 24.01 percent, followed by Le Pen on 21.30 percent, in a crowded field of 11 candidates.

The results revealed Macron was favoured among wealthier, better educated citizens in cities, while Le Pen drew support in the countryside as well as poverty-hit areas in the south and rustbelt northeast.

Voting for the run-off started for French voters in north America and some overseas territories on Saturday.