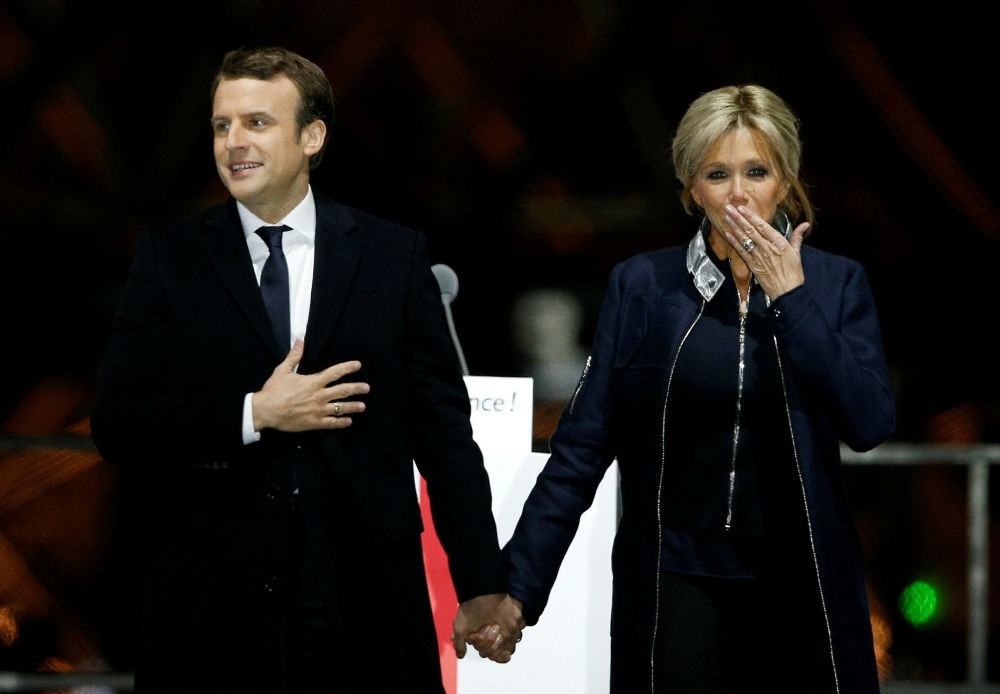 French President-elect Emmanuel Macron holds hands with his wife Brigitte during a victory celebration outside the Louvre museum in Paris, France, May 7.
by Daily Sabah with Wires May 10, 2017 12:00 am

After a five-year absence, France finally has a first lady. In a clear break with tradition, Brigitte Macron has become one of the most talked-about first ladies

Brigitte Macron, the wife of the French president-elect Emanuel Macron has become one of the most talked-about women and an unconventional first ladies in recent French history.

While France's first lady doesn't have an official role, there hasn't been a presidential spouse in the Elysée Palace since 2012, when former President Nicolas Sarkozy and his supermodel wife Carla Bruni left.

The role of France's "first ladies" - and what they do once they no longer have that title - has been a matter of comment after photos allegedly showing former President Francois Hollande's night-time visits to a mistress triggered the break-up of his relationship with long-time partner Valerie Trierweiler.

Hollande entered office that year with his girlfriend Trierweiler at his side, but she left him after a tabloid magazine exposed Hollande's secret affair with actress Julie Gayet in 2014. Gayet has never publicly appeared by Hollande's side.

In a clear break with French tradition, the latest French first ladies have made headlines. The "other-halves" of the last two presidents have fascinated the French and the world more widely, reflecting a change in culture that previously respected the separation between private and public lives.

The Macrons are one of the most talked-about couples in French politics and have appeared four times on the cover of French magazine Paris Match since April last year. The couple has created an unconventional new figure in the French politics.

Brigitte Macron, who is 24 years older than her 39-year-old husband, was the candidate's French teacher in high school and has three children from her previous marriage. Brigitte Trogneux, 63, attends her husband's rallies and public events and Macron doesn't hide that she is also his close political adviser.

Macron has created an inseparable team with his wife Brigitte, who is fierily campaigning by his side, a move more often seen on American political stages than in France.

Macron has expressed his wish to create a "first lady or first gentleman status" in France for the first time, which is not part of the country's official protocol.

"Emmanuel Macron is doing an American-style campaign inspired by Kennedy and Obama," said Christian Delporte, an expert in political communication, referring to the media exposure of the couple.

Last month, Macron denied rumors that he is gay — mentioning his wife's daily presence. "Since she shares my life from morning to night, her only question is how, physically, I would manage," he joked.

Five months after former French President Nicolas Sarkozy moved into the Elysée Palace in 2007, his wife Cecilia Ciganer-Albeniz left him for another man. She played a major role in his campaign and worked alongside him.

The president soon remarried and his new wife, model and singer Carla Bruni, assumed a more traditional role as first lady by staying out of politics and taking part in charity events.

Beaming from billboards, magazines and the stage, singer-songwriter and ex-supermodel Bruni has embraced her post-first lady life in a very public way, resuming her career while generating media buzz over the future plans of her husband. Political watchers and brand analysts say 49-year-old brunette Bruni is still the perfect foil to Sarkozy, who jokes he is "the retired guy" since his May 2012 electoral defeat by Hollande.

Former president Jacques Chirac is believed to have had many extra-marital conquests, as did his predecessor Francois Mitterrand, who even had a daughter born to an art historian Anne Pingeot, his mistress of 30 years. Bernadette Chirac revealed in her book published in 2001 that she considered leaving her husband because of his extra-marital affairs.

As the wife of the country's longest-serving president from 1981 to 1995, Danielle Mitterrand was well-aware that her husband had a second family. However, she chose to stand by her husband. During Mitterrand's funeral in 1996, she stood near Pingeot.
RELATED TOPICS