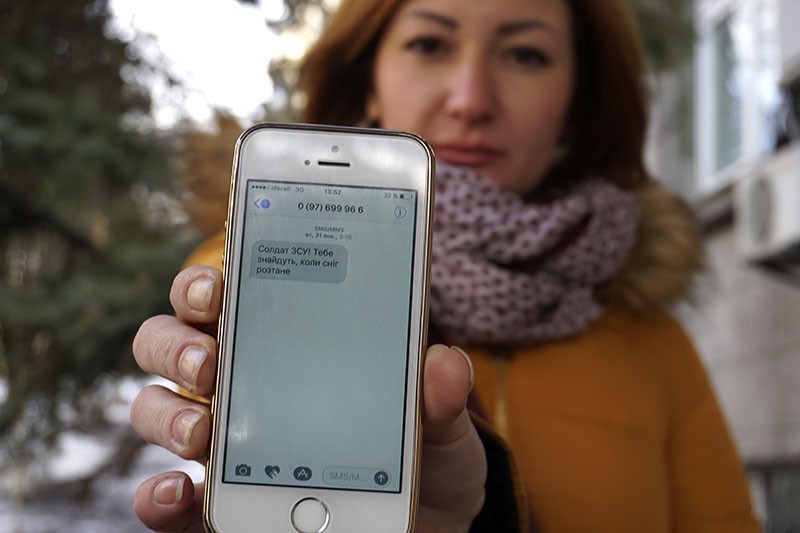 In this photo taken Wednesday, Feb. 22, 2017, television journalist Julia Kirienko holds up her smartphone to show a text message reading u00e9Ukrainian soldiers, they'll find your bodies when the snow melts,, in Kiev, Ukraine. (AP Photo)
by Associated Press May 11, 2017 12:00 am

Television journalist Julia Kirienko was sheltering with Ukrainian soldiers and medics two miles (three kilometers) from the front when their cellphones began buzzing over the noise of the shelling. Everyone got the same text message at the same time.

"Ukrainian soldiers," it warned, "they'll find your bodies when the snow melts."

Text messages like the one Kirienko received have been sent periodically to Ukrainian forces fighting pro-Russian separatists in the eastern part of the country. The threats and disinformation represent a new form of information warfare, the 21st-century equivalent of dropping leaflets on the battlefield.

"This is pinpoint propaganda," said Nancy Snow, a professor of public diplomacy at the Kyoto University of Foreign Studies.

The Associated Press has found that the messages are almost certainly being sent through cell site simulators, surveillance tools long used by U.S. law enforcement to track suspects' cellphones. Photos, video, leaked documents and other clues gathered by Ukrainian journalists suggest the equipment may have been supplied by the Kremlin.

The texts have been arriving since 2014, shortly after the fighting erupted. The AP documented nearly four dozen of them, including the one that Kirienko received on Jan. 31 in Avdiivka, a battle-scarred town outside the principal rebel-held city of Donetsk.

The messages typically say things such as "Leave and you will live" or "Nobody needs your kids to become orphans." Many are disguised to look as if they are coming from fellow soldiers.

In 2015, Ukrainian soldiers defending the railroad town of Debaltseve were sent texts appearing to come from comrades claiming their unit's commander had deserted. Another set of messages warned that Ukrainian forces were being decimated. "We should run away," they said.

"They were mostly threatening and demoralizing, saying that our commanders had betrayed us and we were just cannon fodder," said Roman Chashurin, who served as a tank gunner in Debaltseve.

Ukrainian military and intelligence services had no comment on the phenomenon, but government and telecommunications officials are well aware of what's going on.

A 2014 investigation by a major Ukrainian cellphone company concluded that cell site simulators were to blame for the rogue messages, according to an information security specialist who worked on the inquiry. He spoke on the condition that neither he nor his former firm be identified, citing a nondisclosure agreement.

Col. Serhiy Demydiuk, the head of Ukraine's national cyberpolice unit, said in an interview that the country's intelligence services knew the devices were being used as well.

"Avdiivka showed that the Russian side was using fake towers," he said. "They are using them constantly."

Cell site simulators work by impersonating cellphone towers, allowing them to intercept or even fake data. Heath Hardman, a former U.S. Marines signals analyst who operated the devices in Iraq and Afghanistan, said they were routinely used by American military intelligence officers to hunt insurgents.

Sending mass text messages in wartime isn't entirely new. The Hamas group sent threatening messages to random Israelis during the 2009 conflict over Gaza, for example, though it is not clear how that was done.

Cell site simulators significantly sharpen the ability of propagandists to tailor their messages to a specific place or situation, according to Snow, the academic.

"There's just something about viewing a message on your phone that just makes people more susceptible or vulnerable to its impact," she said.

The type of hardware involved remains a matter of speculation. But last year, the Ukrainian investigative website InformNapalm published a video and photographs appearing to show a LEER-3, a Russian truck-mounted electronic warfare system, in the Donetsk area. InformNapalm also disclosed what it described as leaked Russian military documents discussing the LEER-3's deployment to the Luhansk area of eastern Ukraine.

A 2015 article in Russia's Military Review magazine said the LEER-3 has a cell site simulator built into a drone that is capable of acting over a 6-kilometer-wide area and hijacking up to 2,000 cellphone connections at once. That makes it a "pretty plausible" source for the rogue texts in Ukraine, said Hardman, the former signals analyst.

Russia's Defense Ministry did not return a request for comment. Moscow has long denied any direct role in the fighting in Ukraine, despite a wealth of evidence to the contrary.

The effectiveness of the propaganda texts is an open question. Soldiers say they typically shrug them off.

"I can't say that it had any influence on us," said Chashurin, the former tank gunner. "We were even joking that they must be so afraid of us the only thing they can do is to spam us with these texts."

But Svetlana Andreychuk, a volunteer who has made frequent trips to the front line to distribute food and supplies, said the threats and mockery sometimes hit a nerve in a grinding conflict that has claimed more than 9,900 lives.

"Some people are psychologically influenced," she said. "It's coming regularly. People are so tired. You see people dying. And then you face this."

Some of the messages are crude threats, while others play on allegations that Ukraine's billionaire president, Petro Poroshenko, sometimes nicknamed Parasha, is lining his pockets as soldiers fight in the field. Several of the roughly four dozen messages collected by AP and other journalists and activists carried spelling mistakes typical of Russian speakers trying to write in Ukrainian. Others came from nonsensical numbers (such as 77777) or were sent at impossible times (such as the year 1995), hinting at electronic fakery. A few even tried to mimic payment alerts in a bid to trick soldiers into thinking their accounts were being emptied by their commanders.

Here are a few of the messages, which have been edited for clarity:

"Guys, Parasha sold us out to the Yanks. Let's go attack Kiev instead!"

"Your account was charged 10 hryvnias (then about $0.50) to support the Anti-Terrorism Operation."

"Are you ready to die for Poroshenko's golden deposits!?"

"Who is robbing your family while you are paid pennies waiting for your bullet?"

"Murderer from the Ukrainian Armed Forces. The East won't forgive you and the West won't remember you!"

"Ukrainian Armed Forces, you're just meat for your commanders."

All the text messages collected by the AP and others have been gathered here: https://goo.gl/ap2O7C

Raphael Satter can be reached at: http://raphaelsatter.com