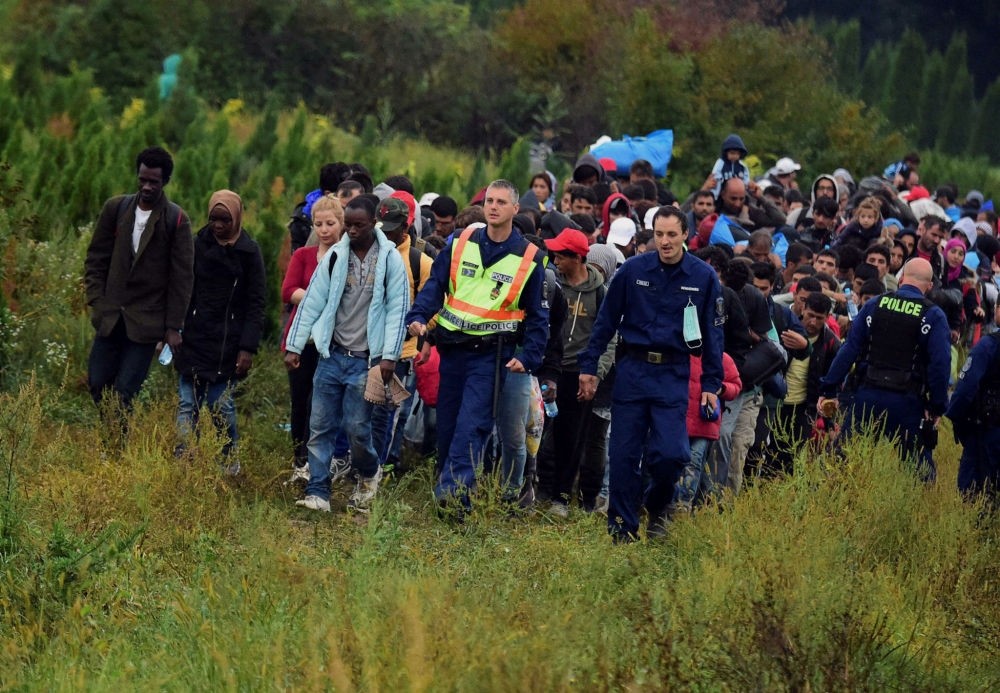 Police escort migrants after they crossed the border near the village of Zakany in Hungary to continue their trip to Gemany.
by Compiled from Wire Services May 12, 2017 12:00 am

Amid the continuing row over migration that has strained EU unity over the last two years, Hungary and Slovakia havy challenged the quota system in the EU's Court of Justice, accusing tha EU of legal violations in adopting the refugee quota

The European Union committed legal violations and took hasty action when deciding to adopt a mandatory quota to relocate refugees in 2015, Hungary charged Wednesday during a hearing at the European Court of Justice.

"This decision [by the EU] was meant to be adopted as quickly as possible, at any price," Miklos Feher, a representative of the Hungarian government, told the court.

Hungary and Slovakia contend that procedural rules were broken during the process to adopt the quota and want the decision annulled.

The Slovakian government's representative argued that the decision was too far-reaching and presented a change to regulations in EU asylum law. She also noted that the slow implementation of the redistribution showed that the system did not work. Judges are expected to rule in the cases in a few months.

The controversial decision to relocate refugees within the bloc was taken by EU interior ministers at the height of the 2015 migrant crisis. Hungary, Slovakia, Romania and the Czech Republic voted against the measure. Despite the decision, many countries have been slow to provide commitments to resettle refugees from Italy and Greece.

Hungary, which is supposed to accept almost 1,300 refugees under the relocation scheme, has not offered to take any refugees yet, while Slovakia has only received 16 migrants from Greece. About 800 more are expected to arrive in Slovakia under the scheme.

In April, Malta proposed a new refugee plan in a bid to end a row over migration that has sharply divided Europe. European Union governments could get 60,000 euros for each asylum-seeker they take in above their quota, or chose to pay that amount if they fall below their share, according to a new plan proposed by Malta.

The EU proposed in 2015 redistributing just 120,000 of the 1.6 million migrants and refugees entering the bloc under the quotas, which are based on a country's population and wealth. The EU has trimmed spending on funds destined for the least developed regions of the bloc in part due to the growing migration costs, raising fears in Eastern European member states of larger cuts in future.

Under the Maltese proposal, EU states would be obliged to take in at least half of their quota and could meet the other half by providing help such as money or staff to help with the screening of people arriving in frontline states.

Countries hosting more people than they are due would receive 60,000 euros per extra person over five years. Those who take in fewer people than their quota, would pay the same amount for every asylum-seeker they fail to take. That compares with a 250,000 euro fine floated by the bloc's executive European Commission a year ago for each asylum seeker a country refuses to take.

For the eastern Europeans, which cite security as well as the largely homogenous make-up of their societies for their refusal to help, Malta suggested a three-year phasing-in period to "further develop their asylum and reception systems".
RELATED TOPICS