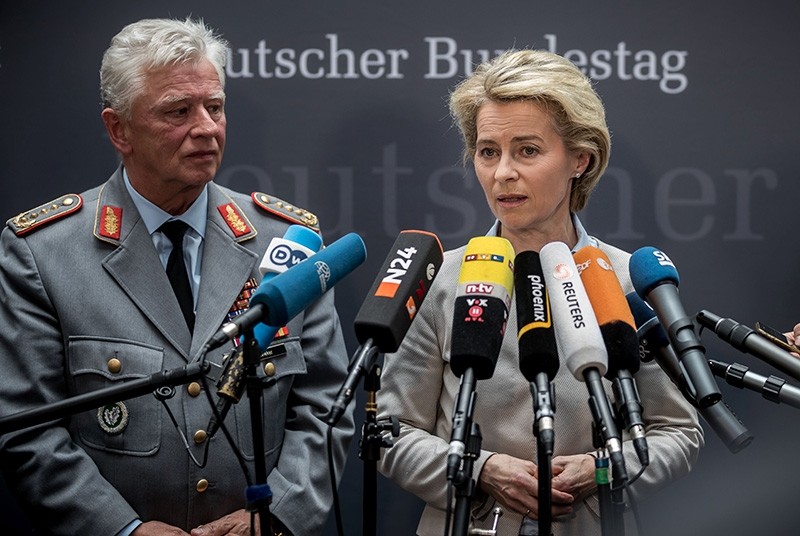 German Defence Minister Ursula von der Leyen (R) and Volker Wieker, inspector general of the German armed forces Bundeswehr, give a statement on May 10, 2017 in Berlin (AFP Photo)
by May 14, 2017 12:00 am

The names of German military barracks honouring a handful of World War Two officers should be changed to show that the country's post-war armed forces have made a clean break from their Nazi past, Defence Minister Ursula von der Leyen said on Sunday.

Having come in for criticism herself after accusing the Bundeswehr armed forces of "weak leadership" amid a national debate over whether there are right-wing extremists in the military, von der Leyen told Bild am Sonntag newspaper the barracks should no longer be named after Nazi-era officers.

"The Bundeswehr has to send signals both internally and externally that it is not rooted in the tradition of the Wehrmacht," she said, referring to the World War Two-era name for the German army. The Bundeswehr was created in 1955.

"It needs to confidently put more of an emphasis on its own 60-year history. Why not rename those barracks? In light of the recent developments, it's time for a new discussion on that."

The Bundeswehr removed the names of many Wehrmacht soldiers, who were seen by and large as honourable soldiers not tied to any war crimes, during reform carried out in the 1980s and 1990s. Yet about a half dozen barracks remain named after Nazi-era figures, the most prominent of which is General Erwin Rommel, who killed himself in 1944 after a failed attempt to assassinate Adolf Hitler.

"We've got to tackle the issue of renaming barracks," von der Leyen said, adding that such a move should be undertaken as part of efforts to modernise the armed forces.

In a related move, the Bundeswehr academy in Hamburg recently removed from a student dormitary a portrait of former West German Chancellor Helmut Schmidt wearing a Wehrmacht uniform. Schmidt, who died in 2015 at the age of 96, served in a tank division on both the eastern and western fronts.

"It's absurd and outrageous -- as if Schmidt had something to do with the incidents of right-wing extremism," said Johannes Kahrs, a member of the centre-left Social Democrats (SPD) that share power with von der Leyen's conservatives.

Von der Leyen has vowed to crack down on hard-right views after criticising a failure to address racism, bullying and sexual abuse.

The defence ministry said on Friday that it had suspended an officer for making far-right comments amid a widening scandal over fears of hardline racist views among soldiers. The officer had been heard making allegations about the existence of a far-right group inside the military

Last week the head of the armed forces called for an inspection of all army barracks after investigators discovered Nazi-era military memorabilia in a garrison.