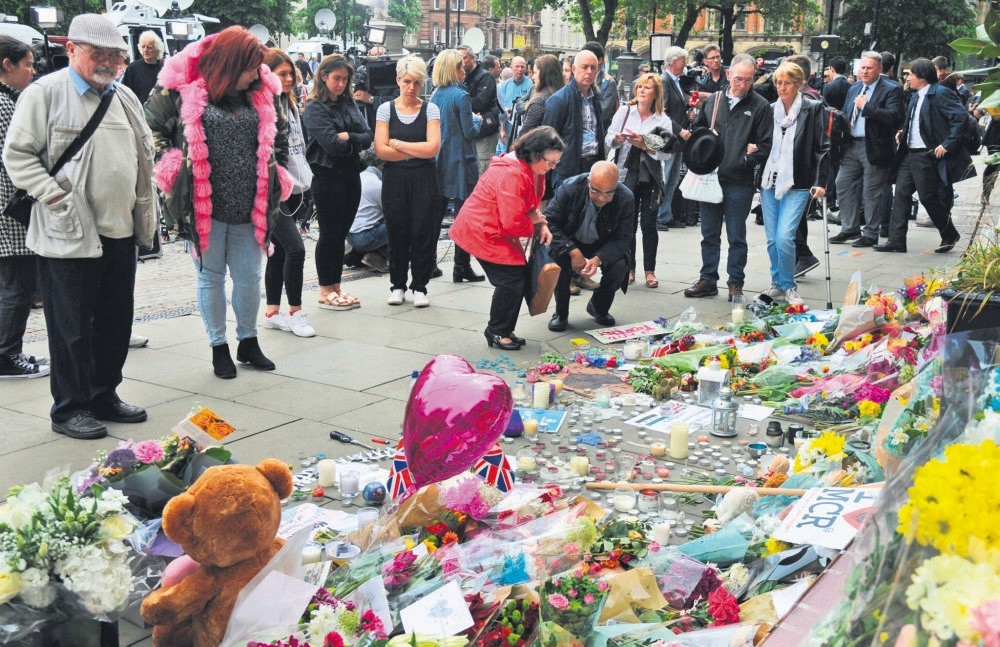 Britons pay their respect to the victims of the Manchester Arena terrorist suicide bombing, May 24.
by Angelos Berberakis May 25, 2017 12:00 am

It would appear that the red, white and blue lights used by several landmarks around the world to show solidarity with France are being used quite often. From the Empire State Building to the Sydney Opera House, from the Brandenburg Gate to the CN Tower, red, white and blue colors once again lit up throughout the globe. They've sure gotten their use in the past two years and counting. So far, 22 victims have lost their lives in the explosion that rocked the northwestern city of Manchester in the United Kingdom at the late evening hours of May 22. The British-born suicide bomber, Salman Abedi, 22, who comes from a Libyan background, died in the explosion that he caused, taking with him not only adults but also children.

Although the Westminster attack, which claimed five more lives, is in recent memory, the Manchester Arena bombing is the worst attack in the country since the 7/7 bombings in 2005, in which another 52 people were killed by four suicide bombers.

Daesh has yet again claimed responsibility for the atrocity, just as it has with numerous recent attack throughout the continent; although their claims have not been verified.

Assistant Commissioner Mark Rowley of the Metropolitan Police stated that the ongoing investigation was "fast-moving and making good progress; however, a critical line of inquiry is whether the dead terrorist was acting alone or part of a group. We still have critical lines of inquiry they're chasing down which has led to a level of uncertainty.

Prime Minister Theresa May warned that the danger may not yet be passed.

"This means," the prime minister continued, "that an attack remains highly likely, but that a further attack may be imminent."

She then went on to describe the measures that will be taken by the Police and the military in response to the atrocity.

"The change in the threat level, means that there will be additional resources and support made available to the police as they work to keep us all safe. As a result of JTAC's decision, the police have asked for authorization from the Secretary of State for Defense, to deploy a number of armed military personnel in support of their armed officers. This request is part of a well-established plan, known as Operation Tempora, in which both the armed forces and the police officers involved are well-trained and well-prepared to work in this kind of environment. The Secretary of State for Defense has approved this request and Operation Tempora is now in force."

Only twice before has the U.K. raised the threat level to "critical." Once in 2006 during an operation aimed at stopping terrrists from blowing up transatlantic airliners with liquid bombs, and once on the following year when security forces were hunting for terrorists attempting to blow up a London nightclub and Glasgow airport.

The Metropolitan Police have increased their presence in the capital, more so in areas in and around embassies, 10 Downing Street and Westminster.

Thousands of people headed out for the vigil in Manchester, as well as other cities, to hold a minute's silence in remembrance of those who died.