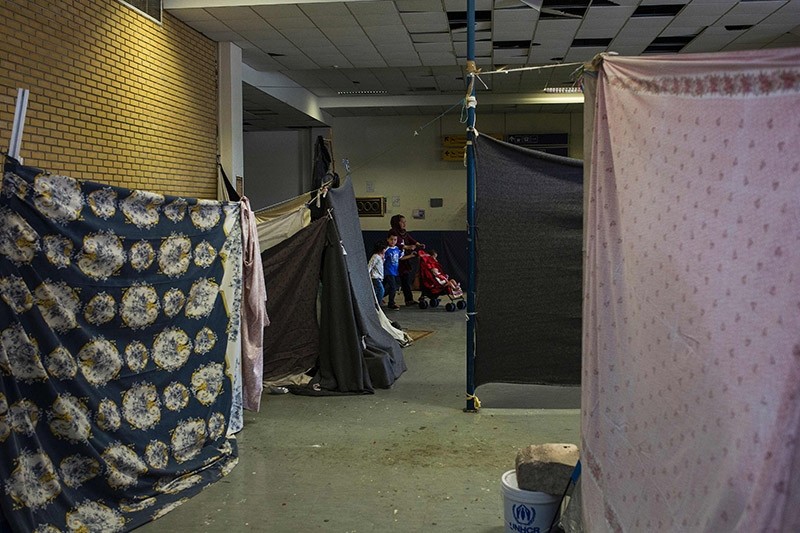 Migrants walk inside the disused Hellenikon airport, where refugees and migrants are temporarily housed, in Athens on May 22, 2017. (AFP Photo)
by Compiled from Wire Services Jun 02, 2017 12:00 am

Greek police on Friday began clearing out a makeshift migrant camp which sprung up in the former Athens airport over a year ago.

Police, along with officials from the International Organization for Migration and interpreters, worked together at the defunct Hellenikon airport complex to move the 500 to 600 people to a new camp 90 kilometers north of Athens.

When the plan to shutter the camp was announced last week, three times as many people were estimated to be living there. Some of the migrants are presumed to have left on their own in the interim.

Human rights groups criticized conditions there as deplorable and unfit for humans. Hundreds slept crammed in tents in the old arrivals terminal last summer, in scorching temperatures with little food and bouts of crime and violence.

They were first taken to Hellenikon in November 2015 when police began transferring hundreds from the Greek-Macedonian border.

In February, some of the refugees went on hunger strike to protest the lack of hot water and suitable food.

Many of them slept at the port of Piraeus, at Hellenikon and at another improvised camp on the northern Greek border for months before organized camps could be created with the help of volunteer groups and EU funds.

Overall, some 60,000 people including many young Syrians, Afghans and Pakistanis, have been stuck in Greece for the past year after neighboring countries along the migrant route into Europe shut their borders.

At the start of the 2015 influx, Afghans were originally viewed as refugees and allowed to continue their journey from Greece to other countries in Europe.

But many now face deportation -- despite growing insecurity that saw civilian casualties in Afghanistan hit a record high in 2016 -- after a disputed deal between EU and Kabul to send migrants back.