UK shaken with another terror carnage in London 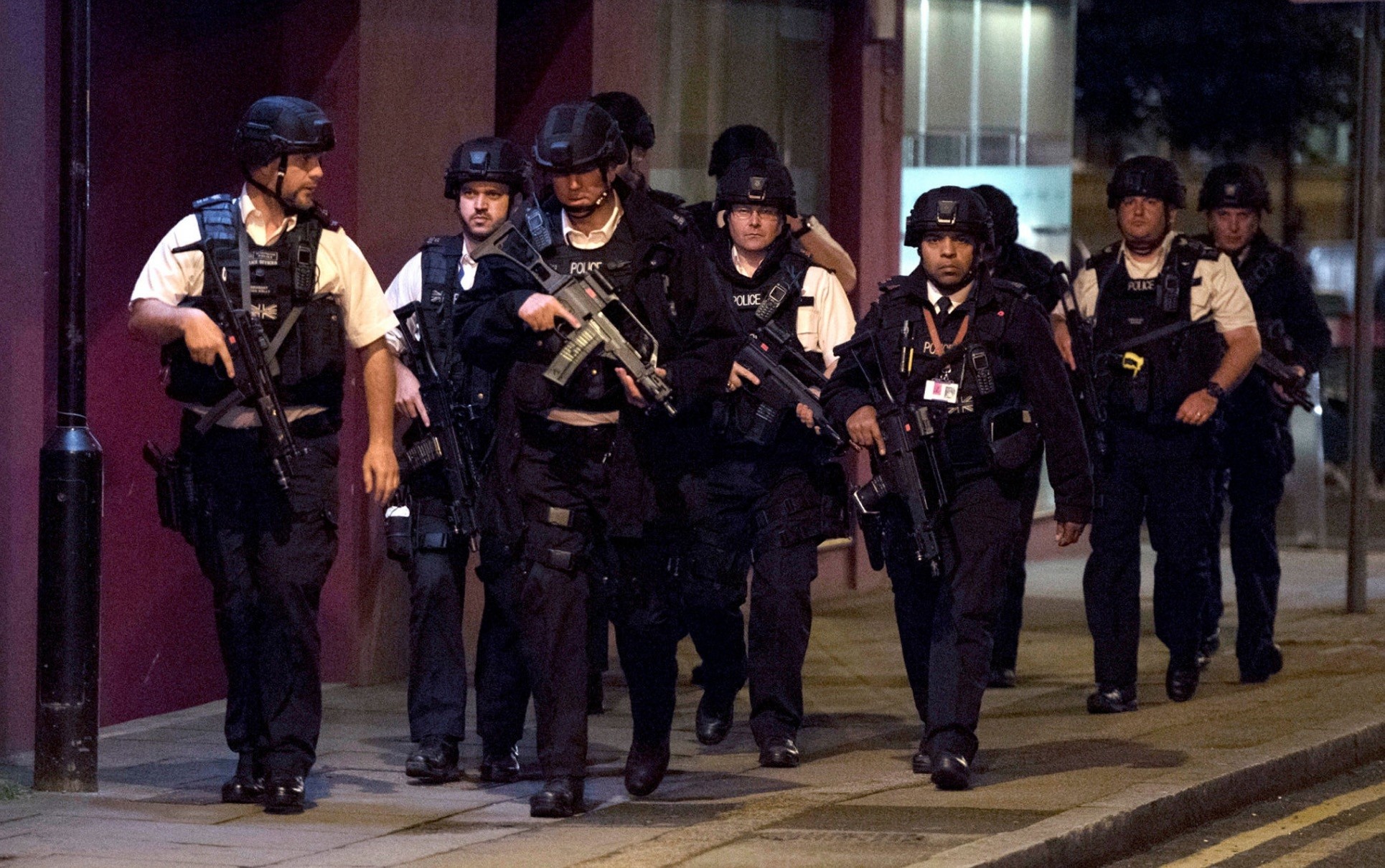 Armed Metropolitan Police Officers in the vicinity of London Bridge, June 3
by Angelos Berberakis Jun 05, 2017 12:00 am

Vehicular and knife-related terrorist attacks are becoming all-too common throughout Europe. In Stockholm in April, three people were killed and London saw its first vehicle-related attack on March 22, the anniversary of the 2016 Brussels bombings. The London attack claimed five lives and shortly before Christmas, Berlin also became a victim of this deadly new tactic in an attack which left 12 dead and dozens more injured after a truck rammed through a Christmas market. In what was the deadliest truck attack on European soil so far, the attack in Nice, France in July left 86 people, including children, dead.

The latest attack on the British capital of London, which arguably resembles a city under martial law, comes just a week after the deadly Manchester suicide bombing, executed by Salman Ramadan Abedi, who that day took 22 lives, one for each year he had grown up in the U.K. Among the dead concert-goers were 10 people under 20, the youngest being an eight-year-old girl. The attack also left 116 people injured, 23 in critical condition, including five children. Of the hospitalized, 12 were children under the age of 16.

Now on Saturday, just two hours before midnight Greenwich time, a southbound van traversed the London Bridge at high speeds, struck the pavement and hit several commuters in the process. The driver proceeded to crash the van at some point after reaching the end of the southern side of the London Bridge, at which point the three, knife-yielding, attackers, got out and went on a shanking rampage throughout local establishments in the Borough Market.

So far, at least seven people have succumbed to their injuries, while at least 48, including a police officer who sustained deep cuts to his throat and face, are injured.

Witnesses reported hearing the attackers screaming "This is for Allah."

Police were able to shoot all three suspects dead and sealed off the surrounding areas including local metro and other stations.

Reports indicate that at least one of the attacks was wearing a "suicide vest" and following the takedown of the terrorists, officers exercised four controlled explosions, one of which was louder than the preceding three, however the police have established that they were all fake, and worn as an additional fear factor for the attack.

British Prime Minister Theresa May has reportedly decided to temporarily suspend political campaigning for the upcoming Thursday elections, stating: ""Following updates from police and security officials, I can confirm that the terrible incident in London is being treated as a potential act of terrorism." Metropolitan police are already dealing with the incident as an act of terror and the Labour Party has also decided to suspend its own political campaign. In a notable exception, U.K. Independence Party leader Paul Nuttall has decided to carry on with the campaign because, if they stopped, he said, that would be "precisely what extremists would want us to do."

Even though London Mayor Sadiq Khan condemned the "barbaric attacks", he's received a lot of heat from the public for a comment he made after the September 2016 New York and New Jersey bombings, in which he asserted that terrorism is "part and parcel" of living in a big city.

Speaking from 10 Downing Street, Prime Minister May stated that the "terrorists were confronted and shot by armed officers within eight minutes of the police receiving the first emergency call. […] I want to thank and pay tribute to the professionalism and bravery of the police and the emergency service, and the courage of members of the public, who defended themselves and others from the attackers.

Calling for change, the prime minister continued: "We cannot and must not pretend that things can continue as they are. Things need to change […] while the recent attacks are not connected by common networks; they are connected in one important sense. They are bound together by the single evil ideology of Islamist extremism, that preaches hatred, sows division and promotes sectarianism. […] We cannot allow this ideology the safe space it needs to breathe, yet that is precisely what the internet, and the big companies that provide internet-based services, provide. […] There is, to be frank, far too much tolerance of extremism in our country. […] It is time to say enough is enough."

U.S. President Donald Trump pledged his support with the U.K., saying that "Whatever the U.S. can do to help out in London and the U. K., we will be there – we are with you. God bless," as well as "We need to be smart, vigilant and tough. We need the courts to give us back our rights. We need the travel ban as an extra level of safety."