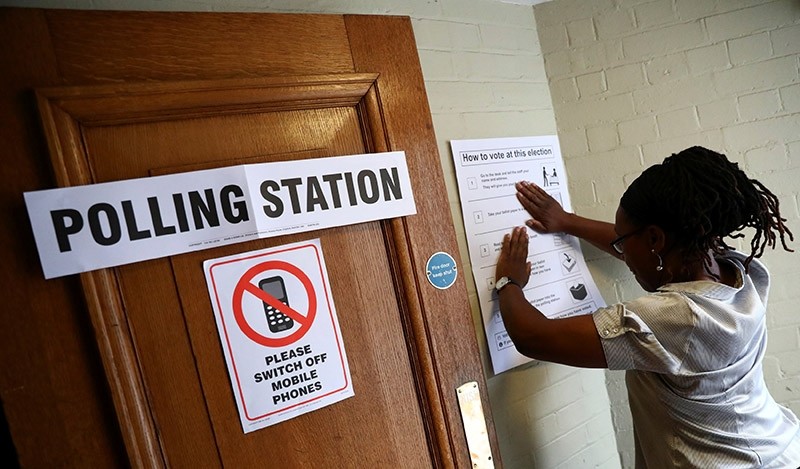 A worker prepares signs outside their polling station on general election day in London, Britain, June 8, 2017 (Reuters Photo)
by Compiled from Wire Services Jun 08, 2017 12:00 am

Polling stations have opened for British voters to choose their members of parliament in a snap election called by Conservative Prime Minister Theresa May.

About two-thirds of eligible voters, or 30 million people, are expected to take part in the election.

Polling stations across the country opened at 7.00am (0600 GMT) and will close at 10.00pm, with voters set to chose between May and Labour leader Jeremy Corbyn, who has seen his huge polling deficit close dramatically in recent weeks.

Prime Minister Theresa May called the snap election in hopes of increasing the Conservative Party's slim majority in Parliament, and strengthening her hand in European Union exit talks.

The campaign did not go to plan. May was criticized for lackluster campaigning and two deadly attacks turned the election into a debate about national security.

May says the Conservatives will build a "stronger, fairer and more prosperous Britain," while opposition Labour leader Jeremy Corbyn says he would govern "for the many, not the few."