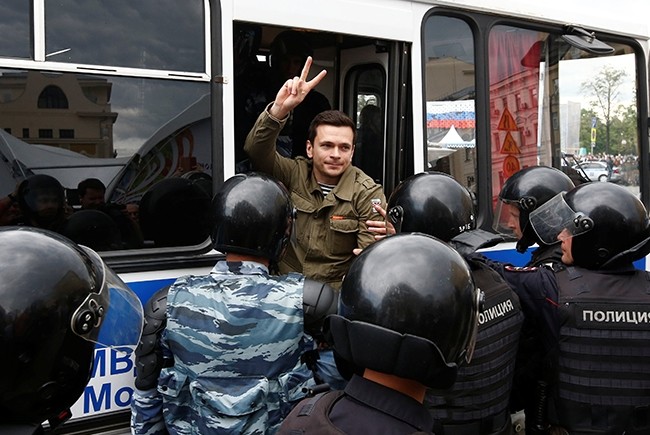 Around 1,000 protesters started to move from the square towards the Kremlin, but their path was blocked by police barriers put in place as part of a festival of historical costumes on Tverskaya Street, Moscow's central thoroughfare.

Meanwhile, about 50 protesters seized by police in the gathering at Mars Field in St. Petersburg, Russia's second-largest city.

As police detained demonstrators, hundreds of others shouted slogans including "Putin is a thief" and "Shame!"

The protests were part of a day of demonstrations throughout Russia spearheaded by Alexei Navalny, the anti-corruption campaigner who has emerged as Russia's most prominent opposition figure and who has announced he intends to run for president next year.

Navalny was detained en route to the political protest in Moscow, his wife wrote on his Twitter account, posting a photo of him getting into a police car.

"Hello. This is Yulia Navalnaya... Alexei has been detained in the stairwell," she wrote about 40 minutes before an anti-corruption rally called by the Kremlin critic was set to start in the city center.

The scale and geographical reach of the protests will show if Navalny can build on the success of a similar event in March, in which thousands took to the streets to call for Prime Minister Dmitry Medvedev, a close Putin ally, to quit.

Those protests were the largest since a wave of anti-Kremlin demonstrations in 2012 and resulted in over 1,000 arrests, putting rare domestic pressure on Putin, who is expected to run for and win re-election next year. Many of those who attended last time were young people, including some school children.

Monday is Russia Day, a public holiday, a factor that may boost turnout.

There is a risk of violence. Authorities in Moscow, the location of what is expected to be the largest protest, authorized a venue well away from the city center.

But Navalny said late on Sunday that the authorities had pressured firms into refusing to supply him and his allies with sound and video equipment to make themselves heard and seen, a move he said was designed to humiliate protesters.

For that reason, he said he was switching the venue to Tverskaya Street, Moscow's main avenue near the Kremlin. That means the protest will be illegal in the authorities' eyes and that riot police could be ordered to move in to break it up.

Since rising to prominence with his fiery speeches protesting Putin's third term in power in 2012, Navalny has cemented his place as Russia's top opposition leader.

But the populist politician faces overwhelming odds in his David and Goliath struggle against the Kremlin and stands almost no chance of ousting Putin.

Shown on state television only in a negative light, Navalny uses YouTube, Twitter and Instagram to get his message out, as well as public speaking, at which the lawyer excels.

He has faced constant hurdles and harassment as he pushes for the presidency -- including repeated assaults like the one that damaged his eye.

Earlier this year he was handed a suspended sentence on corruption charges that could legally bar him from running.

It was the latest in a stream of court cases -- one of which saw his brother jailed -- that supporters say are designed by the Kremlin to cripple any campaign.

"We can only force them to register me," he said, insisting he is going to fight the authorities to run. "It's clear as day Putin doesn't want to come out to debate with me."

Navalny has run electoral campaigns before, harnessing popular discontent to finish second in the Moscow mayoral poll in 2013.

But his views have troubled some liberals.

Controversially, he has appeared at rallies with neo-Nazis in the past, and vowed to restrict immigration from mainly Muslim ex-Soviet Central Asia.

"When we first met he was a moderate Russian nationalist," says rights campaigner Olga Romanova, who has known Navalny for years, likening him to France's Marine Le Pen.

But now Romanova says his views "have changed rather seriously" and Navalny has become a "moderate conservative".

At the Moscow campaign office there is a youthful vibe and someone strums a ukelele at one point.

The owners of the premises, however, are attempting to evict Navalny's team, tearing down the sign, replacing locks and cutting off electricity in a move blamed on the authorities.

But his supporters insist they won't be deterred.

"It's obvious they put pressure on the owner and said 'Get rid of them any way you can'," said Moscow campaign chief Nikolai Lyaskin.

"We aren't going to leave. We'll stay here all the time."