Blast at British base in southern Cyprus injures police officer 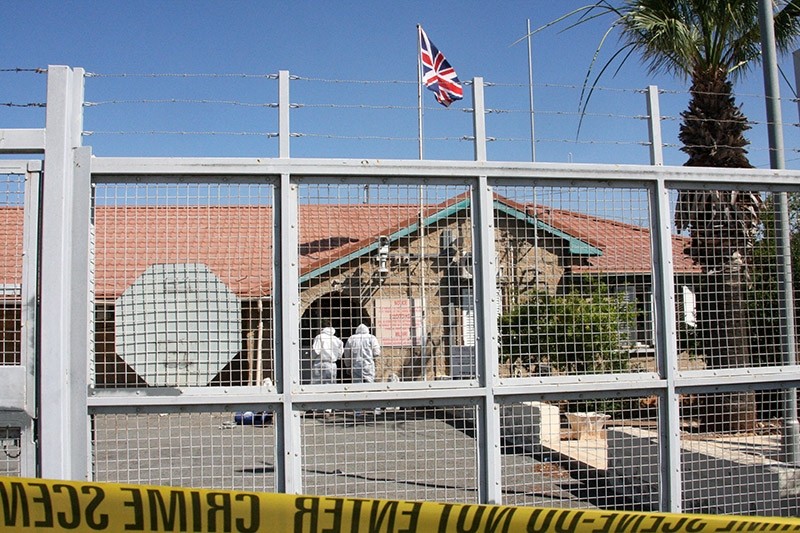 Forensic officers inspect the scene of a small explosion outside a police station in the British Sovereign Base Area (SBA) of Dhekelia, Cyprus, 13 June 2017 (EPA Photo)
by Compiled from Wire Services Jun 13, 2017 12:00 am

A small explosion occurred outside a police station at a British base in Cyprus early on Tuesday, authorities said, adding it was being treated as a criminal investigation.

British base authorities said one police officer suffered "very minor injuries" and there was superficial damage to the entrance of the station at Dhekelia, known as the Eastern Sovereign Base Area.

The incident took place in the early hours of Tuesday on the Dhekelia British military base near the southern coastal town of Larnaca.

"There was an explosion at around 3:10 in the morning outside the entrance to the police station, a police officer suffered minor cuts," British Forces Cyprus spokesman Kristian Gray told AFP.

"The building suffered no structural damage, just a broken window," he added.

The British military ruled out a terrorism connection, saying "this is being treated as a criminal incident".

The scene was cordoned off as investigations were carried out.

An official source told AFP that the blast was caused by someone throwing a grenade over the perimeter fence while riding on a motorcycle.

There was speculation that the incident could be related to illegal bird trapping, with base police involved in a recent crackdown.

More than two million migratory birds are slaughtered each year on Cyprus due to the illicit but lucrative trade.

The birds are served secretly at restaurants on the island as a traditional dish called ambelopoulia.

Britain retains sovereignty over some 99 square kilometers (38 square miles) of territory on Cyprus, which was ruled by the British until 1960.

There are over 7,000 military personnel and dependents stationed on Cyprus while 1,300 locals are employed by the Bases. Thousands of Cypriots also live inside territory controlled by the bases administration.

Cyprus was divided into a Turkish Cypriot state in the north and a Greek Cypriot administration in the south after an Enosis-inspired 1974 military coup was followed by violence against the island's Turkish community, and Turkey's intervention as a guarantor power.