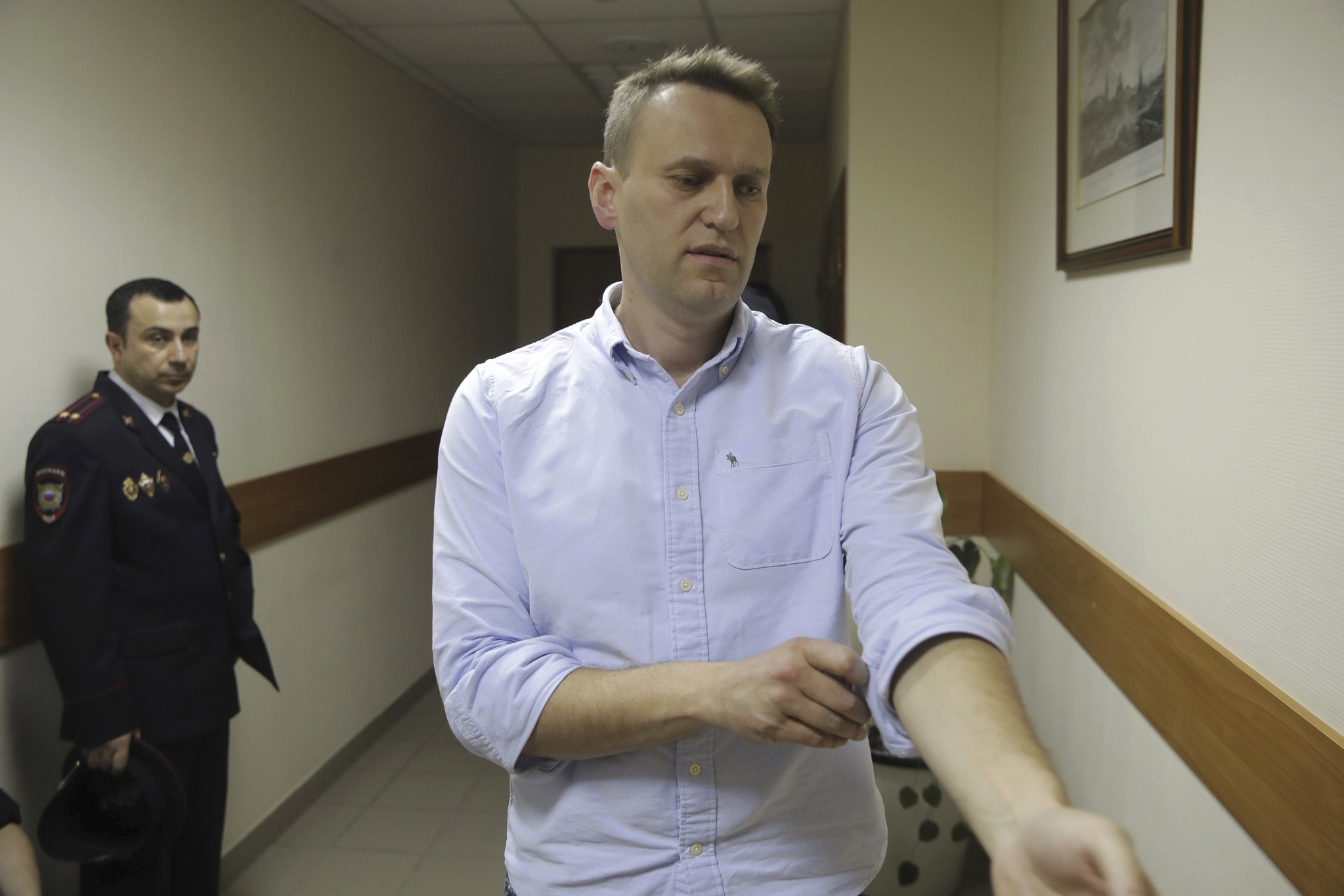 Russian opposition politician Alexei Navalny was jailed for 30 days, and over 1,500 of his supporters were arrested after demonstrations across the nation on Monday against government corruption.

The protests were the second mass action since March called by Navalny, who has announced his intention to run for president next year and has drawn a new generation to the streets through a relentless online campaign.

A Moscow court, sitting late Monday, found the 41-year-old Navalny guilty of organizing unauthorized protests and sentenced him to a month in administrative custody, his spokeswoman Kira Yarmysh said on Twitter.

The OVD-Info rights group told AFP that more than 1,500 of his supporters had been arrested during the protests across the country, including 823 in Moscow where riot police tried to push the crowds back, sometimes by beating them with batons.

As riot police grabbed people and led them to police vans others demonstrators shouted "Shame!", "Putin is a thief!" and "Freedom to Navalny!"

Police held an estimated 600 protesters in Saint Petersburg, said the NGO, which tracks arrests and said more than 100 detentions had also been made in cities including Vladivostok, Kaliningrad, Norilsk and Sochi.

Thousands of Russians, many very young, chanted "Russia without Putin!" in the streets of dozens of cities during Monday's protests.

The United States condemned the arrests, a rare criticism of human rights violations and the Kremlin from Donald Trump's administration.

Navalny himself was picked up by police as he headed to the Moscow event.

Thousands took to the streets in other cities across Russia, with the authorities sanctioning some gatherings and banning others. Some reports said authorities threatened university students with expulsion if they attended.

Navalny's anti-corruption videos have needled the country's ruling elite and drawn crowds to the streets not seen since the protests against President Vladimir Putin's reelection for a third term in 2012.

Navalny, who plans to stand against Putin in presidential elections in March, appeared before a judge Monday evening. He faces up to 30 days in administrative custody for breaking rules on organising demonstrations, his lawyer said.

European Parliament President Antonio Tajani voiced his concern after Navalny's arrest and an EU spokesman deplored "the detention of hundreds of peaceful protesters and the violence used by Russian authorities against them".

The recent rallies were galvanized by a film released by Navalny in early March, which accused Prime Minister Dmitry Medvedev of controlling vast personal wealth through a shadowy network of foundations. It has been viewed over 22 million times.

"Putin has been in power for 17 years and is not planning to leave. He has usurped all power," said protester Alexander Tyurin, 41.

Another protester Yevgeny, 19, said he had been expelled from university after participating in a previous rally.

"Our government shouts that enemies are everywhere and is becoming closed in on itself," he said.

"We want turnover among those in power. Pressure on young people has increased."

Navalny has brought a new generation to the streets through his embrace of YouTube. His team was broadcasting from a studio set up in Moscow, though the electricity was periodically cut, forcing the presenter to speak in total darkness.

Moscow police said Navalny would be charged with administrative offences of resisting arrest and a second violation of demonstration organization rules.

The wave of protests called by Navalny coincides with a public holiday, Russia Day, when Putin hands out awards and holds a reception in the Kremlin.

Turnout was difficult to calculate as ordinary people mingled with those protesting, but thousands filled the Tverskaya Street area in Moscow, many waving Russian flags and banners.

On the eve of the event -- which was authorized -- Navalny announced the protest was changing location to Tverskaya because the authorities had blocked his efforts to set up a stage and sound equipment.

They "are forbidding any contractors from getting us a stage and sound," he wrote on his blog Sunday.

"We are cancelling the rally on Sakharov Avenue and moving it to Tverskaya Street," a main thoroughfare to the Kremlin, he said.

The protest ended up coinciding with City Hall Russia Day events such as the reenactment of various eras in Russian history, from World War I trenches to a Renaissance fair and sword fighting.

In surreal scenes, dozens of buses filled by policemen were parked nearby ahead of the rally while ordinary people gawked at actors in period costumes.

Later, however, riot police and the national guard moved in, even on people sitting in nearby cafes, shouting "Go away! There is an unauthorized protest here!"