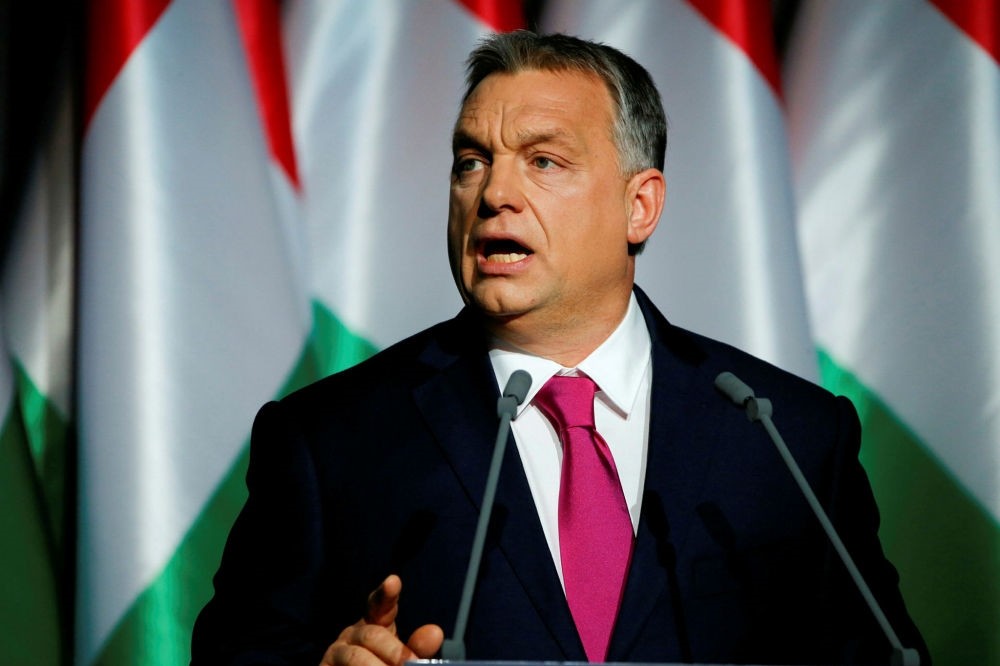 Hungarian Prime Minister Viktor Orban speaks during his State of the Nation address in Budapest on Feb. 10.
by Compiled from Wire Services Jun 14, 2017 12:00 am

Amid calls from European Parliament for the bill to be dropped, Hungary's ruling Fidesz Party pushed strict new regulations through parliament yesterday for nongovernment organizations that get foreign funding.

A new law, passed with 130 votes to 44, will force groups receiving more than 24,000 euros annually in overseas funding to register as a foreign-supported organization or risk closure for noncompliance. Under legislation drafted by right-wing populist Prime Minister Viktor Orban's government and pushed through by Fidesz, nongovernmental organizations with foreign donations must register with the authorities and declare themselves as foreign funded.

Nongovernmental organizations will also have to list any foreign sponsors giving them more than 500,000 forints ($1,800) a year. The Hungarian government claims the bill will ensure greater transparency and protect Hungary from foreign influence.

The law marks a hardening of frontlines in Orban's battle with foreign-funded nongovernmental organizations, in particular those receiving support from Hungarian-born emigre Soros. Government-financed billboard and media campaigns have targeted the philanthropist and a questionnaire sent to households nationwide urged support for the registration of foreign-funded nongovernmental organizations.

Yesterday's vote followed the hasty approval of another law in April that threatens to shut the Soros-founded Central European University in Budapest. At the heart of the issue is the conflict between Orban and Hungarian-American financier George Soros whose Open Society Foundations support some of the nongovernmental organizations such as the Hungarian Helsinki Committee, a human rights advocate, and corruption watchdog Transparency International. The government sees those groups as foreign agents working against Hungarian interests. Orban and other government officials have expressed their displeasure, especially with the Helsinki Committee's advocacy for refugees and asylum seekers and claim the group is among those working to weaken Hungary's radical anti-migrant policies.

Since coming to power in 2010, Orban has blunted restraints on his power by taking control of much of the Hungarian media, curbing the powers of the constitutional court and placing loyalists in top positions at public institutions. Orban, 54, who will seek re-election for a third consecutive term in April 2018, has been campaigning hard against nongovernmental organizations funded by billionaire Soros, claiming they are a mafia-like network employing paid political activists who pose a threat to national sovereignty. Along with tough anti-immigrant rhetoric, such attacks on Soros fit well with Orban's domestic political agenda. His Fidesz Party has a firm lead over the opposition in opinion polls.

Hungary's parliament has separately sparked an international outcry after approving a law in April for the systematic detention of all asylum seekers in camps on the border composed of shipping containers. European Parliament will prepare a formal resolution to launch a process to determine whether there is a "clear risk of a serious breach" of EU values by Budapest. The process would be based on Article 7 of the EU Treaty whereby EU governments can ask a member state to take specific action to end a serious breach of EU values