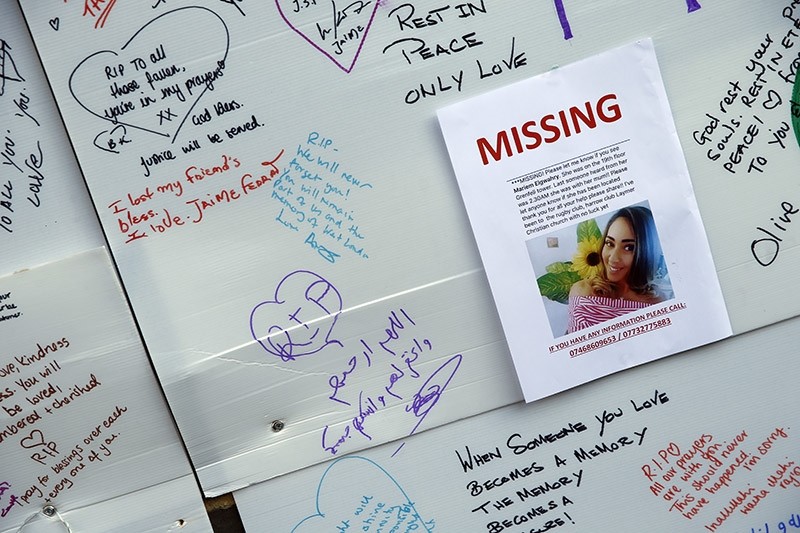 A schoolgirl looks at messages of support for victims, missing and those affected by the massive fire in Grenfell Tower, in London, Thursday, June 15, 2017. (AP Photo)
by Compiled from Wire Services Jun 15, 2017 12:00 am

The death toll in a fire disaster that destroyed a 24-storey block of flats in London was expected to rise on Thursday, with many people still missing and firefighters facing hazardous conditions as they searched the charred carcass.

Smoke was still wafting out of the shell of the Grenfell Tower on Thursday morning and a Reuters witness saw a big piece of cladding falling from the building, 32 hours after fire engulfed the building in the early hours of Wednesday and turned it into a huge flaming torch in minutes.

Authorities have confirmed 17 deaths but have said that the figure would rise and that they did not expect to find any survivors. Firefighters rescued 65 people from the building.

"Sadly I can confirm that the number of people that have died is now 17," Metropolitan Police commander Stuart Cundy said in a televised statement on Thursday.

London Fire Brigade chief Dany Cotton told ITV that her crews had reached the top floor of the building and conducted initial visual searches from doorways but had not done a comprehensive search because it was unsafe.

"We've got structural surveyors and my urban search and rescue team who are going to come down, make an assessment and find a way of making the building safe so that we can go through the whole building, fingertip search, painstakingly, looking to see what's in there," she said.

Survivors who have lost all their belongings in the blaze spent the night at emergency shelters, as charities and local support groups were flooded with donations of clothes and bedding from shocked Londoners.

The fire brigade said the inferno was unprecedented in its scale and speed.

"The scene that I was confronted with was an unparalleled scene to anything I had seen before. The building was ablaze. I have truly never seen that in a high-rise building," Cotton told Sky News.

By Thursday morning, there was no sign of life in or around the blackened hulk. Security cordons were in place around the base of the tower, where the ground was littered with charred debris.

Outside the cordons, impromptu tributes had appeared, with photos of missing people, messages of condolences, flowers and candles.

Emergency services said it was too early to say what had caused the disaster. Some residents said no alarm had sounded. Others said they had warned repeatedly about fire safety in the block.

Questions are growing about how the flames spread so quickly, engulfing its 120 apartments. The focus centers on the cladding fitted to external walls on the 1970s concrete block, as part of a £8.7-million ($11 million, 9.9 million euros) refit completed only last year.

According to the BBC, the cladding had a plastic core, and was similar to that used by high-rise buildings in France, the United Arab Emirates and Australia which had also suffered fires that spread.

Rydon, the firm responsible for the refit, said the project "met all required building regulations".

Harley Facades, which fitted the panels, told the BBC: "At this time, we are not aware of any link between the fire and the exterior cladding to the tower."

Prime Minister Theresa May said there would be an investigation into the cause of the "appalling tragedy", once the last bodies had been recovered.

Grenfell Tower looms over a social housing estate in north Kensington, just streets away from some of the most expensive homes in the world in Notting Hill.

The area has a large immigrant population, but many families have lived in the area for years, passing their low-rent homes onto their children.

Eyewitnesses told how residents in the upper floors shone their mobile phone torches to attract attention, before they disappeared from the windows, their screams of help falling silent.

"We saw them dying," said Adi Estu, 32, who was evacuated from her home nearby.

Some desperate people reportedly jumped from the windows, while one woman, Samira Lamrani, said she saw a woman drop a baby from the ninth or 10th floor, for the child to be caught by a man below.

The fire triggered a wave of mourning in a country already battered by a string of terror attacks.

More than £480,000 had been raised online for the victims by Thursday morning, while local community centers were inundated by donations of clothes and food.

Volunteers in the city of Glasgow -- 550 kilometers (350 miles) away -- sent a truck laden with nappies and other supplies.

Cladding has been added to a number of buildings across London in recent years, intended to provide insulation as well as improve the appearance of older buildings.

But Kostas Tsavdaridis, associate professor of Structural Engineering at the University of Leeds warned: "Some materials used in facades act as significant fire loads.

"Although theoretically they are fire resistant, in most cases they are high-temperature resistant instead of fire resistant. But even if they are, smoke and fire will spread through the joints and connections."

There were questions about why there was no sprinkler system in the Grenfell Tower which could have helped stop the fire spreading, or any central smoke alarm system that would have woken sleeping residents.

Official fire service advice for residents to stay in their homes and use towels to block out smoke, while awaiting help, has also come under scrutiny.

Firefighters were only able to reach the tower's 12th floor of the block at the height of the blaze.

Abdelaziz El-Wahabi, his wife Faouzia and their three children were among those who followed to protocol in their flat on the 21st floor.

"Last time I spoke to his wife, he was on the phone to the fire brigade. I've not heard from them since," his sister Hanan Wahabi told AFP on Wednesday morning.

David Collins, former chairman of the Grenfell Tower Residents' Association, said the building's management had failed to listen to residents' calls for improvements on fire safety.

"If the same concerns were had in a wealthy part of Kensington and Chelsea they would have got resolved, but here they didn't get resolved," Collins told AFP.