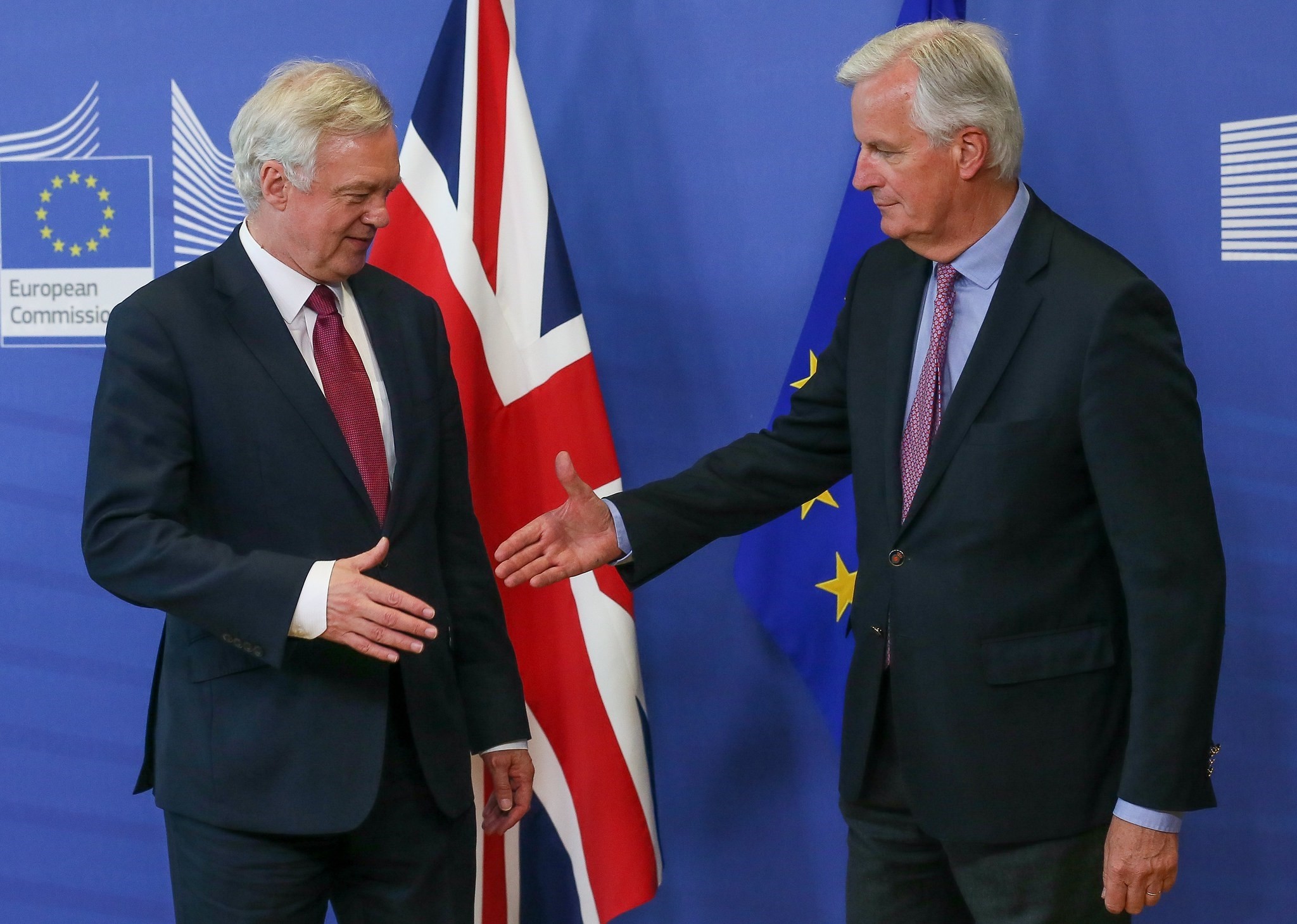 UK Secretary of State for Exiting the EU, David Davis (L) is welcome by Michel Barnier, the European Chief Negotiator of the Task Force for the Preparation Conduct of the Negotiations with the UK under Article 50. (EPA Photo)
by Compiled from Wire Services Jun 19, 2017 12:00 am

Britain and the EU have agreed on the priorities and timetable for Brexit negotiations after the first session of talks on Monday, EU pointman Michel Barnier said.

"Today we agreed on dates, we agreed on organization and we agreed on priorities for negotiations," Barnier told a joint press conference with British counterpart David Davis.

A terms-of-reference document agreed by the EU's Michel Barnier and Britain's David Davis said further talks would be held in the weeks starting on July 17, Aug 28, Sept 18 and Oct 9. The two sides will hold four further monthly rounds of talks with the aim of getting the remaining 27 EU countries to agree this autumn to move on to the trade talks phase.

The working language of the negotiations will be English and French, with interpretations provided by the European Commission. Both sides want transparency to be the default.

EU chief negotiator Michel Barnier said the talks with Brexit minister David Davis, which are starting a full year after Britain's seismic vote to leave, had started "on the right foot".

In carefully choreographed talks that even saw the two men exchange mountaineering gifts, they agreed to discuss divorce issues before negotiations on a future trade deal can start.

These include the thorny issues of Britain's estimated 100-billion-euro ($112 billion) exit bill, the rights of EU citizens living in Britain, and the fate of the border in Northern Ireland.

But the agreement appeared at odds with British Prime Minister Theresa May's earlier insistence that the divorce and the future relationship should be discussed in parallel.

Frenchman Barnier struck a firm tone as he said the timetable for Britain's divorce after four troubled decades of membership made sense.

"If you ask me are we going to make concessions, I must tell you that it is the UK that is leaving the EU, the single market, the customs union and not the other way around," the former European commissioner and French foreign minister told a joint press conference with Davis.

Davis said the talks were off to a "promising start" and denied that Britain had caved in on the sequencing of the talks.

"That position hasn't changed, it's the same as it was before," said Davis, a tough-talking figure in the "Leave" campaign in last year's Brexit referendum.

He also confirmed that Britain would opt for a "hard Brexit" that involves quitting the EU's single market and customs union, rejecting suggestions that after a poor election performance by May the line might be softened.

"We need back control of our borders, we will leave the single market and the customs union." he said.

Worried by immigration and loss of sovereignty, Britons voted last June to become the first nation ever to leave the 28-nation EU.

The vote came as a profound shock to Brussels against a backdrop of rising anti-EU sentiment, with many -- including now U.S. President Donald Trump -- predicting the bloc's eventual break-up.

But May's mandate for a hard Brexit has since eroded after her Conservative party lost its parliamentary majority in the June 8 general election.

Britain's political instability has caused concerns in European capitals hoping to get the negotiations over with quickly and cleanly, as has May's oft-repeated threat to walk away from the talks without a deal if necessary.

Barnier however said that "a fair deal is possible and is far better than no deal -- that is what I said to David today. That is why we will work all the time with the UK, and never against the UK."

Davis said Prime Minister May will also set out at an EU summit on Thursday her proposals for the rights of the three million EU nationals living in Britain, and one million Britons in the EU, with the British government to publish a detailed offer next Monday.

EU officials had earlier warned May not to make that offer so early in the talks.

"The best way we can spend this week is to rebuild trust," rather than tackle the big difficult issues right at the start, a European source said.

In Berlin, German Chancellor Angela Merkel emphasized the unity of the remaining 27 EU countries, who have been alarmed in recent weeks by May's threats to walk out of the talks.

"I would like us to get a good agreement that is in both sides' interests. But the 27 of us will formulate our interests very clearly and hopefully, together," Merkel said.

After the initial shock of last year's Brexit vote, the bloc at 27 appears to have steadied in recent months and got a real morale boost with the election of French President Emmanuel Macron in May

But many in Brussels fear that London has no real strategy, with May under pressure at home and still trying to close a deal with a conservative Northern Ireland party to stay in power, and facing criticism for her handling of the aftermath of a devastating tower block fire.

Barnier has warned that the negotiations must be wrapped up by October 2018 to allow time for all parties to ratify a final accord by March 2019.